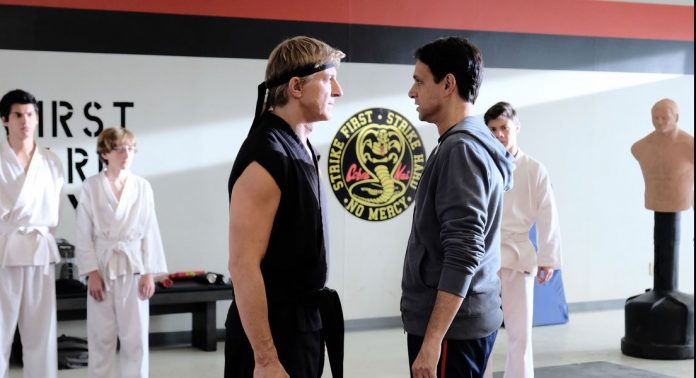 The Netflix streaming platform delivered to fans the third season of their favorite series Cobra Kai, on January 1 as planned.

Since 2017 fans have enjoyed the sequel to Karate Kid, which has become the series of the moment. In all seasons, some fans have noticed that star Will Smith’s name appears in the Cobra Kai credits.

As it turns out, Hollywood star Will Smith’s name appears in the Cobra Kai credits due to him being the show’s executive producer.

Recall that Cobra Kai, starring mainly Ralph Macchio as Daniel LaRusso and William Zabka as Johnny Lawrence, is a series derived from the Karate Kid universe that began to develop in the 1980s.

Fans of the universe also saw the 2010 remake of the Karate Kid movie starring superstars Jackie Chan and Will Smith’s son Jaden Smith.

When this version of the Karate Kid was developed in 2010, Will Smith’s production company, Overbrook Entertainment, secured the franchise rights to run the remake, which it maintains to this day.

In this sense, when Cobra Kai showrunners Josh Heald, Jon Hurwitz and Hayden Schlossberg wanted to create the sequel, they had to have the approval of the production company Overbrook Entertainment owned by Will Smith. For this reason, his name appears as the executive producer of the Netflix series.

See Also
Why Johnny quotes the same word so much

Charmaine’s demeanor that made her the hated character