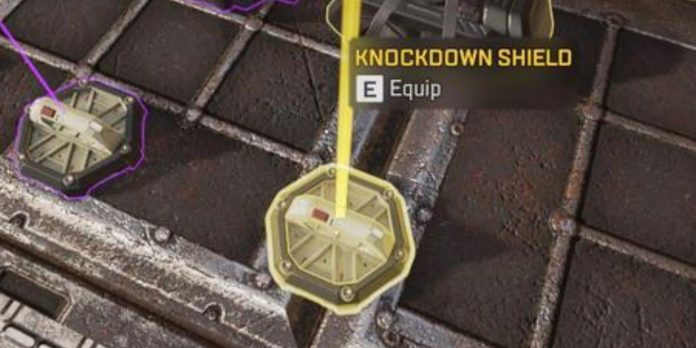 Outfitted gear in Apex Legends are wearable items that give players either an increase in their protection or additional benefits. There are four pieces of equipment: helmets, body/EVO shields, knockout shields and backpacks. Helmets, while not adding to the player’s base shields, reduce the damage received by the player’s head. Body shields and Evo shields provide players with additional levels of protection, while higher levels provide more shields, and Evo shields have an additional development bonus after their carriers have dealt enough damage. Knockout Shields protect defeated players with a deployable shield that increases their defense due to movement speed. Last but not least, backpacks allow players to carry more items with them, such as ammunition, medical supplies and grenades.

The gear in Apex Legends is very similar to the standard battle royale; with higher-level items providing more protection or space in the backpack. But Apex Legends also has Level 4 items. These gold items have the same characteristics as Level 3 items, but have additional effects that can help the user and his squad. The Level 4 Helmet reduces the recovery time of the legend’s tactical and ultimate abilities. Level 4 Body Shield improves the effects of minor healing items such as Syringes and Shield Cells. A Level 4 backpack gives additional shields and health to revived allies. But by far the most criticized additional ability that the Apex Legends gear provides is the self—healing mechanics of the Level 4 Knockout Shield.

They knock me down, but I get up again

As the name suggests, the self-healing mechanic allows players equipped with a Level 4 Knockout Shield to respawn after they have been defeated. By holding down a certain button, an animation begins in which the legends of the players will prick themselves with a syringe, and then get up. The animation is very slow, and those who are close to the reborn player will easily hear them. This should compensate for the defeated squad’s ability to return.

From the user’s point of view, a Level 4 Knockout Shield does not offer any special advantages. Even if they manage to self-heal, players will have to recover using healing items and reloading their empty weapons. They can be compensated by equipping a Level 4 Backpack and expanded level 4 magazines (the former allows you to respawn with additional shields and health, and the latter automatically recharges stored weapons), but slow and audible animation easily gives away the player trying to revive.

Players who are knocked down together die together

Most of the criticism comes from those who have to fight with players equipped with Level 4 Knockout Shields. Although it is relatively easy to destroy a squad equipped with a Level 4 Knockout Shield, the extra time required to do so leaves the attacking squad open to third parties who want to destroy them. This can cause the attacking squad to lose the number of kills in the initial battle or, even worse, to be destroyed by another squad. In the context of the Apex Legends rating mode, this would be equivalent to losing rating points.

Speaking of rank games, the eliminated initial squad can still increase their position just by holding out. Let’s say there are three squads left in the rating game Apex Legends. Squad 1 is completely knocked down, but it has a Level 4 Knockout Shield, so that players from Squad 2 who knocked it down do not get points for strikes. This allows Squad 3 to get closer to Squad 2 and increase the advantage. Since Squad 2 does not have a Level 4 knockdown shield, they are eliminated and take third place; leaving Squad 1 to take second place after being finished off by Squad 3.

Apex Legends players may not always find themselves in this position, but the fact that they exist is worrisome. It is this feeling of lack of reward for good gameplay that makes the mechanics of self-healing so contradictory. The simplicity of being able to pass a shootout makes it almost a requirement for squads to have a Level 4 Knockout Shield.

There is hope beyond the horizon

Fortunately, the era of self-healing mechanics has almost come to an end. Respawn Entertainment has announced that this mechanic will be completely removed from Apex Legends after the 14th season of “The Hunt” is released on August 9. The Level 4 Knockout Shield will receive the “Guardian Angel” perk of the Level 4 backpack, and the Level 4 backpack will receive a new Perk that allows players to carry more batteries for shields, first aid kits and Phoenix first aid kits for each inventory slot. As the self-healing mechanics will soon disappear from the game, old and new players will find that Apex Legends is gradually moving towards a more balanced and healthy style of play.

The details of the Rings of Power story describe the struggle...

Rumor: Liquor told everything they know about the new Bioshock game