Home Entertainment Why was the Ghost of Qui-Gon Jinn’s Power not at the party... 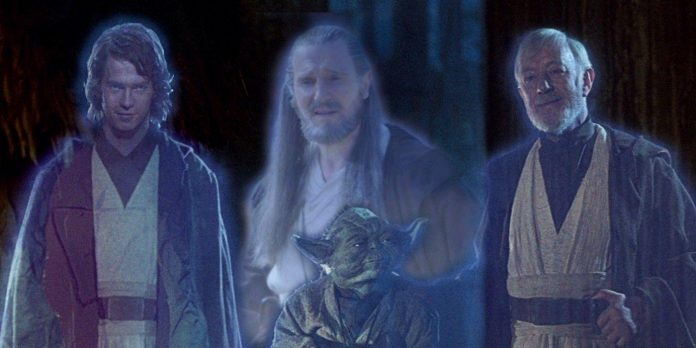 Warning: Contains SPOILERS for the 6th episode of Obi-Wan Kenobi.

The finale of Obi-Wan Kenobi includes a ghostly cameo by Qui-Gon Jinn performed by Liam Neeson before the events of Return of the Jedi, so it’s strange that he wasn’t at the party on Endor. Throughout Obi-Wan, Kenobi Obi-Wan (Ewan McGregor) makes concentrated efforts to establish contact with the spirit of his former master. When Obi-Wan finally sees Qui-Gon Jinn (Liam Neeson) in episode 6, Qui-Gon tells Obi-Wan that he has “always been here”, regardless of Obi-Wan’s previous failed attempts to contact him. The appearance of Qui-Gon Jinn not only made a well-deserved cameo role of the character, but also symbolically marked the moment of closure for Obi-Wan.

Shortly before he saw the ghost of Qui-Gon Jinn’s Power, Obi-Wan had to painfully face the fact that Anakin Skywalker’s (Hayden Christensen) transformation into Darth Vader was essentially irreversible, and then accept the fact that it wasn’t his own fault. Since Obi-Wan was fulfilling his master’s last wish by taking Anakin as his padawan, Obi-Wan’s pain at losing Anakin to the dark side is also related to Qui-Gon Jinn. Thus, coming to terms with the ghost of Qui-Gon’s Power was a means of overcoming the feeling of his failure. However, if Qui-Gon Jinn could manifest as a Force ghost during the events of Obi-Wan Kenobi, he would surely be able to appear in Return of the Jedi.

Although it seems like an oversight, Qui-Gon’s absence from the party on Endor makes sense. The ghosts of the Force that appeared at the Endor party were of great importance to the story of Luke Skywalker (Mark Hamill), a story in which Qui-Gon was not directly involved. Qui-Gon Jinn, the first Force ghost from the “Star Wars” of modern Jedi times, forced other Jedi participants to follow his example in maintaining a spiritual presence after death. Extensive Star Wars lore documents dozens of Force ghosts of both the Jedi Order and the Sith Order. However, even if we take into account only the ghosts of the Force that existed between the “Hidden Threat” and “Return of the Jedi”, there will still be a significant number of them that will not be related to Luke’s story, have never been in his life. Qui-Gon Jinn’s appearance in Obi-Wan Kenobi is much more appropriate, and his cameo essentially mirrored the visit of the Force ghosts in Return of the Jedi because of the sense of completion he brought.

In the 2004 DVD release of Return of the Jedi, Hayden Christiansen replaced Sebastian Shaw as Anakin Skywalker in the Force Ghost scene. Technically, George Lucas could also add Qui-Gon Jinn to the ghost Force mix if he wanted to. In the end, he included a new musical number “Return of the Jedi” at Jabba’s Palace in the theatrical reissue of 1997. However, Qui-Gon Jinn did not take any part in the original trilogy, so his presence in it would be completely inappropriate. Including him in Return of the Jedi would be akin to including Darth Maul or Jar Jar Binks. Meanwhile, his cameo in a live performance in Obi-Wan Kenobi lived up to a 23-year wait and was relevant to the events of the show.

Both Obi-Wan Kenobi cameos in episode 6 were significant to both Obi-Wan and Darth Vader for different reasons. After seeing Qui-Gon Jinn in the finale, Obi-Wan not only closed down, but also demonstrated a restored balance with the Force after the battle with Darth Vader and the return of Princess Leia (Vivien Lyra Blair) to Alderaan. The inclusion of Qui-Gon Jinn in Return of the Jedi would not only be illogical for the story, but would also reduce the impact of his appearance in Obi-Wan Kenobi if it had already happened once before.