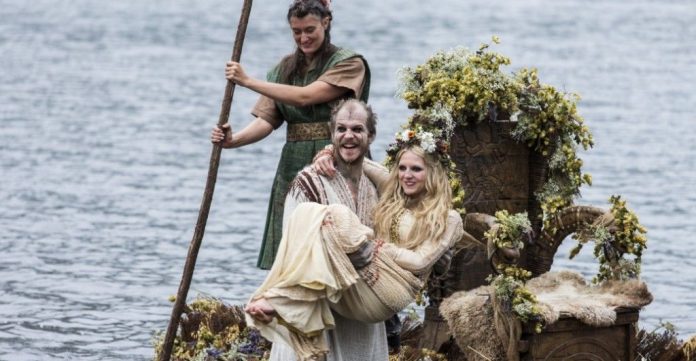 Helga (Maude Hirst), Floki’s wife and a very popular Viking character among fans for her loyalty and compassion. Created by Michael Hirst, the series debuted on the History Channel in 2013 and is currently in its sixth and final season.

In Vikings, Helga was Floki’s mistress who became his wife after learning that she was pregnant. Despite all the raids, battles, and Floki’s unstable personality and mental state, Helga remained loyal and loving to him.

They had a daughter, Angrboda, who died of a fever in Vikings season 4, an event from which Helga was unable to fully recover. Later in the season, Helga and Floki met Tanaruz and Helga adopted her.

But Tanaruz had a hard time adjusting and was very afraid of the couple, but especially Helga. During a raid in England, Tanaruz stabbed Helga and seconds later committed suicide. Soon after, Floki found her and Helga died in her arms.

Unlike other Viking characters who were killed for behind-the-scenes reasons, Helga’s death was due to her character arc requiring it, as well as Floki’s.

By the time Helga died, Floki had already lost his best friend (Ragnar) and his daughter, and the death of his wife was the last push he needed to fully submit to the will of the gods.

Michael Hirst shared that although heartbreaking his story had come to an end. Both Helga and Floki were destroyed by the death of her daughter, and it was time for Helga to leave.

Floki wouldn’t be the same if Helga were still alive, and if there’s one thing Viking fans can be sure of it’s that every major death on the show has happened for a reason, and Michael Hirst has it all carefully planned out.

Somag News is an online international news platform that founded in 2019 with a dynamic news team.Our news team includes reporters that has a speciality in different fields from each other.
Contact us: [email protected]ews.com
MORE STORIES