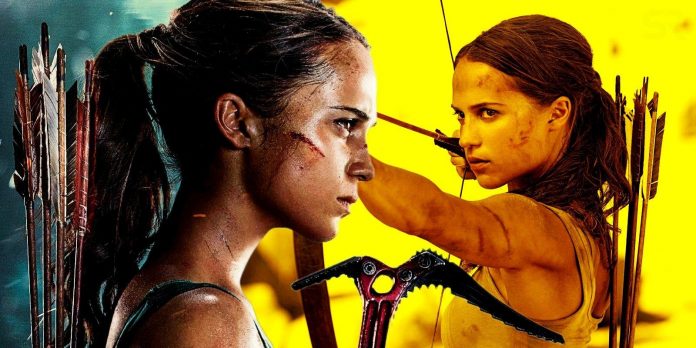 The release of Alicia Vikander’s Tomb Raider 2 takes a long time, as various complications continue to delay the expected sequel to Tomb Raider. Vikander first played the iconic video game adventurer Lara Croft in the reboot movie in 2018. Tomb Raider received mixed reviews, but grossed $274 million worldwide. This was enough to trigger conversations about Tomb Raider 2 within the walls of MGM, and the sequel officially entered development in 2019, and Lara Croft from Vikander was supposed to return.

The development of Tomb Raider 2 began incredibly actively when the Free Fire writer and director duo, consisting of Amy Jump and Ben Wheatley, joined the project. MGM’s confidence in the project even included a sequel release date in 2021. The current status of the sequel “Tomb Raider” is that the creator of “Lovecraft Land” Misha Green has assumed the duties of a screenwriter and director. The creative transition took place in 2021 and was apparently a sign that Tomb Raider 2 would develop quite quickly.

Unfortunately, the future of Tomb Raider 2 is in doubt. After COVID-19 forced a delay in production and release date, Amazon’s recent acquisition of MGM appears to be the latest complication for the sequel. Alicia Vikander shared the disappointing news about Tomb Raider 2 in 2022, in which she admitted that she has no idea what the status of the film is and that corporate policy is holding it back. The MGM and Amazon deal now seems to be the main reason that the Tomb Raider sequel has been in development for so long, as viewers have been waiting for the next Lara Croft adventure for more than four years.

The chances that Tomb Raider 2 will ever be released at the moment seem possible anyway. Alicia Vikander has confirmed that she and Misha Green are ready to work when Amazon and MGM give them the green light. They have already discussed some basic stunts and battle scenes that they want to perform together in Tomb Raider 2. The plot details of the upcoming video game movie have been kept secret until now, but Green hinted that the sequel could be called Tomb Raider: Obsidian. Their passion for the film could potentially be the reason for creating a sequel at the end of the day. Since it is quite obvious that Vikander and Green are ready to shoot Tomb Raider 2, this allows MGM and Amazon to control the fate of the film.

Amazon has not yet revealed its plans for the MGM content library, which they now own. Amazon hasn’t shied away from theatrical films in the past, and they can hope that Tomb Raider 2 will far surpass the box office of the original with the right marketing push. However, it is also possible that the company will agree to make a sequel only if it goes straight to Prime Video, providing the streaming service with one of MGM’s major film franchises to attract viewers and subscribers. Of course, the fate of Tomb Raider 2 really depends on whether Amazon thinks it will be a good return on investment. As the box office returns to pre-pandemic form in 2022, successful blockbusters from other studios may become a point in favor of the film and make it finally happen.