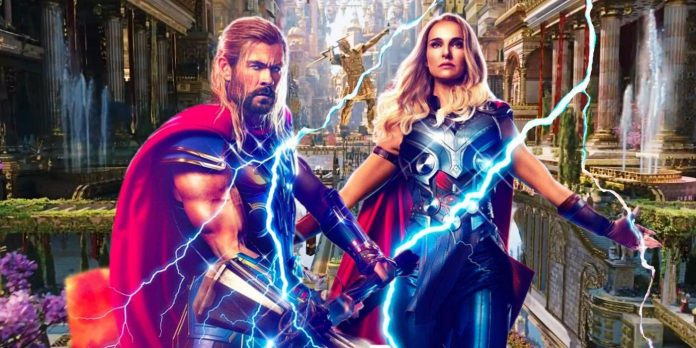 Attention! This article contains spoilers for the movie “Thor: Love and Thunder”.

The computer graphics of “Thor: Love and Thunder” were heavily influenced by excessive dependence on Disney’s new technology, Volume. Many MCU films have been criticized for their visual effects. It’s not that the people working on them aren’t qualified and capable; instead, the issues usually reflect the rapid turnaround that Marvel Studios expects from VFX houses. Black Panther’s final battle with Killmonger — one of the most criticized scenes in the MCU to date — is partly blamed for the demanding twist.

Thor: Love & Thunder is another example, although this time the problems are much more common. Surprisingly, even screenwriter and director Taika Waititi acknowledged the problems, openly ridiculing scenes in his own film. Waititi’s public criticism has caused a mixed reaction from the public: some agreed with his opinion, while others are outraged that visual effects workers, who are often known to have been mistreated by film studios, should be treated with great respect.

But Taika Waititi’s comments, no matter how controversial they were, really drew attention to the visual effects of “Thor: Love and Thunder.” Something clearly went wrong in “Thor: Love and Thunder”, but, curiously, this is due not so much to the visual effects department as to the creative decisions made by Marvel Studios. The problem is the volume.

“Thor: Love and Thunder” uses Volume, a new technology created for the Mandalorian, which is becoming increasingly popular in Disney productions. Developed by ILM, Volume is essentially a replacement for the green screen. The actors perform in front of a massive curved LED screen with a photorealistic background. For the studio, this has the advantage of reducing the need for on-location filming and potentially reducing costs simply because computer animators tend not to unionize, unlike more traditional roles in set design. The actors also praised him for improving their acting because they don’t just need to imagine the environment; instead, they can genuinely look back and react to the images. Chris Hemsworth specifically noted that he liked to shoot scenes taking place in the City of Omnipotence, the kingdom of the gods, because he liked the design.

Theoretically, the volume should mean that every movie or TV show has the same quality as “Mandalorian”. Unfortunately, since this is a new technology, directors and cameramen have to adapt to it. Tom encourages the creation of scenes in which people stand in a small square with a luxurious background behind them, with which they do not interact in the slightest. Moreover, with the attention to this background, less attention seems to be paid to traditional lighting methods – this means that things slip away and differences in quality become visible. Thus, the problem with the visual effects of “Thor: Love and Thunder” is not entirely related to computer graphics; rather, the responsibility lies with the entire film crew (including the director) who are mastering new technologies.

Has the pandemic affected the computer graphics of “Thor: Love and Thunder”?

The situation here has certainly worsened due to the pandemic. Marvel has created a tight-knit bubble community to create the film. Therefore, the children of the stars appear in the film; their appearances were not just cool Easter eggs of Thor: Love and Thunder, but instead were a way to limit the number of families inside the bubble. It is possible that this led to an over-reliance on Volume, a substitute for filming on location at a time when travel was difficult, and Volume presented an unmistakable way to show huge crowds without actually bringing people together. Perhaps some of the problems with the movie “Thor: Love and Thunder” could be solved if a smaller part of the film was shot using Volume.

The CGI issues in Thor: Love and Thunder may be particularly obvious, but they point to broader issues. The modern VFX industry is actually only about 20 years old, and workers are not unionized, which means that there is no collective bargaining to improve working conditions. Studios tend to take advantage of this, and unfortunately Marvel has a particularly bad reputation in this regard. One former Marvel VFX artist recently revealed on social media that they were the reason for his departure from the industry. “This is a terrible customer,” he remarked, “and I’ve seen too many colleagues break down after overwork while Marvel was squeezing wallets.”

Even Order 66 couldn’t make Obi-Wan turn away from the clone...