Home Entertainment Why the third season of “Orville” has the details of the opening... 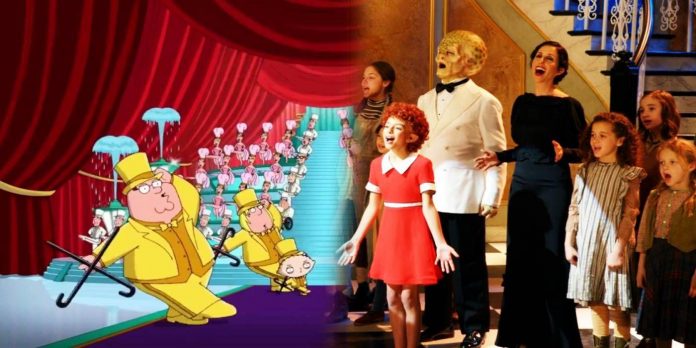 Attention! SPOILERS for the 4th episode of the 3rd season of the TV series “Orville” – “Softly falling rain”.

The musical beginning of the third season of the series “Orville”, episode 4, coincides with the beginning of another popular show by creator Seth MacFarlane “Family Guy”. The brilliant, old-fashioned song and dance title sequence that opens each episode of MacFarlane’s animated sitcom epitomizes Family Guy’s pop culture literacy and frequent musical numbers. It also reflects creator Seth MacFarlane’s well-documented love of music and musicals, which has led to eight solo albums by the talented screenwriter, producer, actor and singer. In the 4th episode of the 3rd season of the TV series “Orville” called “Softly falling Rain”, MacFarlane’s love for musicals is reflected in his sci-fi comedy-drama series.

Although the script for Softly Falling Rain is not credited to MacFarlane, it puts his character, Ed Mercer, at the center of the plot and reflects MacFarlane’s love of musicals. Continuing to explore Orville’s new thematic horizons, Gently Falling Rain, written by Brannon Braga of Star Trek and Andre Bormanis, is a real-world political thriller dealing with the threat of extreme right-wing populism and politics. isolation. This may not seem like the most obvious place to deploy a Family Guy-style pop culture reference through a Broadway musical number, but it’s an elegant omen that has an emotional payoff.

Still negotiating a treaty with their sworn enemies Krill, the president of the Union and a trio of Union admirals take a Krill delegation to the production of “Annie”. This subtly reflects Orville and Family Guy creator Seth MacFarlane’s own views on modern Broadway musicals, believing that “shows that were written in the 40s, 50s and 60s have stood the test of time and can really be called great shows. .” (via GQ). In the futuristic world of Orville, diplomatic visits are made to see Broadway musicals, not ballets or operas of 21st-century visits. In addition to expanding the fictional world of Orville, the number from Annie leads to a funny comedy about the clash of cultures, when the Krill delegation notes the “obsessive prophecy” of Annie’s optimistic song “Tomorrow”, noting: “In our culture, the sun is a symbol of suffering and death.” But it also goes further than the sometimes empty pop culture references to MacFarlane’s “Family Guy,” foreshadowing an emotional plot for Captain Mercer.

Continuing the trend of previous episodes, “Gently Falling Rain” retains the darker tone of season 3 of Orville. Negotiations with Krill fall apart when, instead of a more open-minded Krill, a populist instigator, Telea, is elected chancellor. Having first met during an undercover mission in krill space, Telea and Ed met again when she conducted her own undercover mission aboard the Orville. Posing as Union officer Janelle Tyler, she and Ed began a romantic relationship.

Arriving on Krill during this brutal political upheaval, Ed is whisked away by a mysterious Krill group who introduces him to a huge new character, Orville. In a secret place, Ed meets a half-human, half-kril: his daughter Anaya. Concerned about its potential use as a political weapon, Telea hid it. Living alone in the care of a sympathetic Krill, Anaya is virtually an orphan, just like Annie. It’s a perfectly deployed callback that turns a Family Guy-style musical joke from an earlier episode into something deeper. Anaya is a symbol of hope for future diplomatic relations between humans and Krill, suggesting that in Orville’s planetary politics, “the sun will rise tomorrow.”

The infernal developments of Dead Island 2 repeat the first game