Home Entertainment Why the tape ends in the 6th season of “Better call Saul”,... 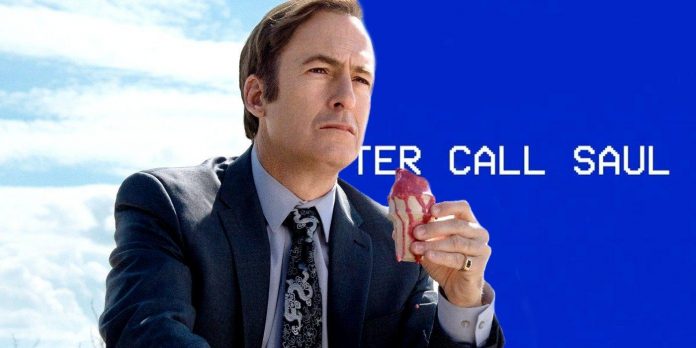 The opening part of the 10th episode of the 6th season “Better call Saul” is more important than you think. The iconic title “Better Call Saul” is known for its dusty desert rock guitar theme and shimmering VHS aesthetic, but, as expected, the beginning carries a hidden meaning. The images change depending on the episode number, but the order remains the same for all seasons — for example, in episode 1, an inflatable Statue of Liberty will always be shown, and in episode 10, Saul Goodman’s falling coffee mug. However, with each season, the quality of the VHS deteriorated, which visually reflected the slow moral decline of Jimmy McGill.

The beginning of “Better Call Saul” brings an unexpected new change to season 6, episode 10. After a colder-than-usual start, the introduction of “Nippy” begins, as expected, with a very shaky image on VHS, in which the muzzle of Saul Goodman “The Greatest Lawyer in the World” falls to the ground. land. Suddenly, the noise of a buzzing tape is heard, and the usual image is replaced by a blue screen with a title card in a classic analog font.

For those who consider DVD an ancient relic of the past, the ways of VHS will seem mysterious and otherworldly. Basically, a blue screen is what can happen if the VCR player doesn’t read the videotape, appears at the beginning and end of the videotape, or if a crash occurs. Thus, the sequence of titles “Better call Saul” “Nippy” can be interpreted in two different ways. After slowly deteriorating over the seasons according to Jimmy’s origin, the intro of “Better Call Saul”, which finally breaks down, could mean the completion of his transformation into Saul Goodman, which happened at the end of season 6, episode 9. Like Jimmy McGill himself, the tape finally broke. Or does the end of the VHS tape mean the end of the timeline of the prequel “Better Call Saul”? This mythical invisible tape represented the story of Jimmy before Breaking Bad, and the blue screen opens the veil over that particular era. Better Call Saul should now be kind and rewind or insert a new tape.

Which opening sequence would be better called in the last episodes of Saul?

The blue screen trick of Better Call Saul “Nippy” is cool, of course, but it’s probably not the headline sequence we get for the grand finale. In fact, the 11th episode of season 6, “Better Call Saul,” will enter completely uncharted territory in terms of debuts. Each past season of “Better Call Saul” consisted of ten episodes, and the sixth season was the first to exceed this number. As mentioned above, the opening image usually changes depending on the episode number, which means that only episodes 1-10 are actually assigned a start. Since episodes 11, 12 and 13 of the series “Better Call Saul” did not exist before, there is no precedent for what these introductions should look like – another possible motivation for stopping the videotape on episode 10.

Assuming that viewers won’t be greeted with a simple blue screen in the next three episodes, season 6 of “Better Call Saul” will probably return with a brand new intro. Since the timeline before Breaking Bad was marked with VHS footage, it would be funny if the last episodes of Better Call Saul (set 6 years later) adopted the style of a DVD home menu. Not only will this honor the era of Gene’s timeline, but the restored image quality may symbolize Jimmy’s newfound clarity. In the closing moments of “Nippy,” Gene painstakingly ponders whether to buy a “Saul Goodman” suit, clearly tempted by a return to old habits. Instead, he throws off his bright clothes and leaves. As Jimmy’s morality gradually returns, will the “Better Call Saul” headline sequence become bright and colorful again?