Home Entertainment Why the next MCU endgame won’t take so long (despite the fact... 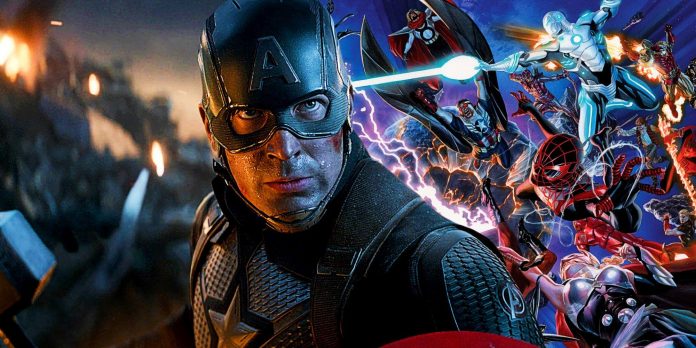 It took eleven years after Iron Man for Avengers: Endgame to happen, but the MCU’s next major crossover event may not take that long. After Avengers: Infinity War and Endgame’s outstanding box office performances, it was more than proved that Marvel’s strategy of a long buildup of solos films and a couple of Avengers movies before the confrontation against Thanos was the right decision. Trying to replicate that strategy for the MCU Phases 4, 5, and beyond was an obvious choice – but this time, things are different for the franchise.

2012’s The Avengers was already a landmark for comic book movies, but the post-credits scene showing Thanos revealed to those who knew the Marvel universe that something even more special was coming. Thanos himself remained in the backseat until Infinity War, with the exception of two small scenes in Guardians of the Galaxy. However, the buildup to the quest for the Infinity Stones remained present through MCU’s Phases 1, 2, and 3 thanks to moments like the Mind Stone being used to create Vision in Avengers: Age of Ultron and Doctor Strange using the Time Stone in his solo film.

As of now, what the next major MCU event will be is still not clear. The focus on the multiverse in stories like Loki, What If…?, Spider-Man: No Way Home, and Doctor Strange in the Multiverse of Madness indicates that a version of Secret Wars could be on the way. Kang The Conqueror also seems to be a major player for the upcoming years of the MCU as he was introduced in Loki through He Who Remains and will appear in Ant-Man and the Wasp: Quantumania. In any case, as much as it sounds natural that the MCU takes another decade in order to properly set up its next major crossover event, the combined runtime of Phase 4’s releases suggests otherwise. In terms of the number of releases, it may take as long or even longer for the Avengers to reunite in one final battle, but in terms of years, the MCU’s next Endgame might not be too far away as things are now moving much faster in the franchise.

How Long Marvel’s Infinity Saga Is

The Infinity Saga consists of all 23 movies released between Iron Man and Spider-Man: Far From Home. Of that total, four are Avengers films, two are Guardians of the Galaxy films, and the rest are solo entries spotlighting most of the Avengers members. While the Marvel shows for ABC and Netflix like Agents of Shield and Daredevil would often reference the MCU, it is still not clear whether those productions are considered MCU canon. Therefore, unlike the current MCU, the Infinity Saga only saw theatrical films being produced by Marvel Studios. The journey from Tony Stark’s becoming Iron Man to his ultimate sacrifice in Avengers: Endgame, plus Spider-Man: Far From Home’s sort of post-blip epilogue, adds to 2996 minutes – or 49 hours and 56 minutes.

How Long MCU’s Phase 4 Has Been So Far

MCU’s Phase 4 consists of every Marvel Studios property released after Black Widow. Considering that plans for Avengers 5 have not been revealed yet, it is still not possible to say when Phase 4 will end as the Avengers films were usually the turning points for Phases 1, 2, and 3. Another major difference from Phase 4 to the previous MCU phases is that Marvel Studios is now developing its own TV shows for Disney+. Unlike Netflix’s The Defenders Saga and Agents of Shield, there is no doubt about the Disney+ Marvel series being canon, and not only do the shows feature some of the MCU’s biggest stars like Tom Hiddleston, Anthony Mackie, and Elizabeth Olsen, but they are also deeply connected to the events of the films. Scarlet Witch’s story in WandaVision, for example, is the starting point for Doctor Strange in the Multiverse of Madness.

So far, MCU’s Phase 4 consists of five films and six TV shows, all of which add to around 41 hours of content. Therefore, by the end of 2022, after the releases of Ms. Marvel, Thor: Love and Thunder, She-Hulk, and Black Panther 2: Wakanda Forever, MCU’s Phase 4 will have surpassed the entire runtime of the Infinity Saga. In other words, Phase 4 will have more hours of content in just three years than the Infinity Saga had in 11 years.

Why Is There So Much Marvel Content Now (But No Avengers 5)?

The Marvel series on Disney+ completely changed the flow of MCU content. Now, on top of the usual two or three MCU films released in a year, there are also shows like WandaVision and Moon Knight that count for around six hours of content each. Therefore, a Disney+ Marvel series can often be worth three theatrical MCU films in terms of runtime. In addition, there is also a natural expansion in the number of MCU titles being produced, as Avengers: Endgame’s record-breaking box-office performance confirmed that there is no such thing as Marvel fatigue.

Considering how successful the MCU continues to be, both in the movies and on Disney+, it might seem strange that not much has been heard about Avengers 5, not even a release date or which heroes will form the Avengers’ next lineup. However, the wait for Avengers 5 makes sense considering how many heroes now exist in the MCU who need a proper solo adventure, as well as the major players who have yet to be introduced like the Fantastic Four. The Avengers films should be the pinnacle of the MCU, and a long wait between each installment can help achieve that.

Despite the long wait for the next Avengers movie, Phase 4 is expanding the MCU at such a rate that it can barely be compared with how the Infinity Saga played out. It was only after a decade-long buildup that Thanos’s arrival in Infinity War happened, but that was when the MCU was still releasing from one to two films a year and when there was no Disney+. Even if Phases 4, 5, and beyond take their time setting up an event like Secret Wars, that could still go a lot faster than the quest for the Infinity Stones. For example, the MCU opened up the concept of the multiverse in Loki, explored different realities in What If…?, united the three versions of Spider-Man in No Way Home, and set up the concept of incursions in Doctor Strange 2, all in less than a year. In this scenario, it will not take long before MCU’s next Thanos, be that Kang The Conqueror or another character, is properly introduced, and the saga’s next major event could arrive much sooner than Avengers: Endgame did.

“Southern Charm” star Katherine Dennis has been dumped again… by another...