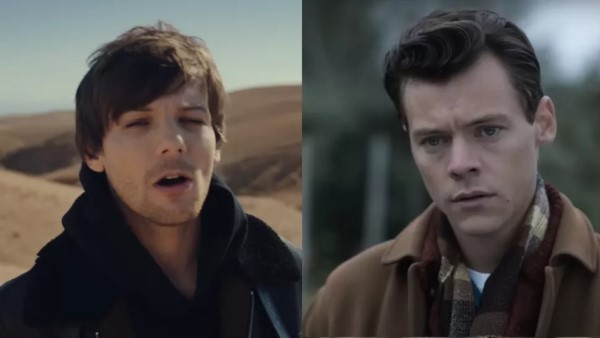 Louis Tomlinson honestly compared himself to Harry Styles after One Direction.

It’s no secret that Harry Styles is one of the most popular young celebrities in pop culture. The One Direction graduate currently has generations of fans, and he has a very busy career as both a pop star and an actor. And his former bandmate Louis Tomlison recently spoke about why he was initially “worried” about how much Styles took off.

One Direction made a sensation at the peak of their popularity, making every member of the group a star. Each of them has released solo music, although Harry Styles seems to be on a completely different level. Louis Tomlinson recently spoke to The Telegraph about the difficult emotions he experienced after seeing the rise of fame of his former bandmate. According to him,

I’d be lying if I said it didn’t bother me at first. Only because I didn’t know where to put myself, and in fact my only reference point was the other band members. But it doesn’t surprise me that Harry is the most commercially successful, because he really fits the model of a modern star. He not only makes music, but also makes films, and the stadium tour he has done is just incredible.

How refreshingly honest. While other celebrities may have been holding back their true feelings, Louis Tomlinson was vulnerable because of how he felt seeing Harry Styles achieve superstar status as a solo artist. Although instead of being offended by Stiles, it seems that the problem arose because he compared himself to all his former bandmates. Since they all release music at about the same time, it’s probably hard not to.

Louis Tomlinson’s comments for The Telegraph are likely to go viral soon, as are most things about Harry Styles lately. Indeed, he became more famous and beloved only after he became a real movie star, thanks to roles in such projects as “My Policeman” and “Don’t Worry, Darling” by Olivia Wilde. Then there is all the attention that comes to him thanks to his relationship with the last director.

For his part, Louis Tomlinson has definitely achieved success after the release of One Direction. In January 2020, his debut studio album Walls was released, which included five singles. And he is preparing for the release of his second album called Faith in the Future. And it seems that this title fits the way he initially compared himself to his former bandmates like Harry Styles.

Later in the same interview, Louis Tomlinson showed great love and respect for Harry Styles and for all the places that his career as a singer/actor leads. How the 30-year-old artist shared with the publication:

I look at Harry like a brother, man. I am very proud of what he does.

Indeed, Harry Styles has been on a roll for the past few months. As a musician, he sells out arenas, and also celebrates the release of “Don’t Worry Darling” and “My Policeman”. He has also made countless headlines thanks to his relationship with Olivia Wilde, and the general public seems to be quite interested in this latest famous couple.

Louis Tomlinson’s new album Faith in the Future will be released on November 11. Both of Harry Styles’ latest films are streaming: “My Cop” is on Amazon, and “Don’t Worry, Honey” is on HBO Max. Check out the movie’s release dates in 2022 to plan your next movie, although Stiles will be noticeably absent.