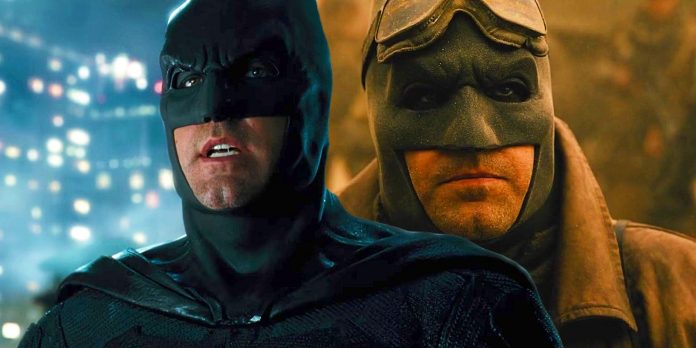 After returning in “The Flash,” which seemed to be his last time as Batman, Ben Affleck will now also appear in “Aquaman and the Lost Kingdom,” raising the question of why the DCEU can’t completely abandon the version of Affleck’s character. After Jason Momoa’s mysterious Instagram post featuring Ben Affleck on the set of Aquaman 2, it became known that Affleck would indeed appear as Batman in the sequel to Aquaman. The premiere of Aquaman and the Lost Kingdom should now take place earlier than The Flash, which means that the fate of Ben Affleck’s Batman still largely depends on the latter.

Affleck didn’t want to play a superhero again after Daredevil (2003), but Snyder’s suggestion of a Batman inspired by Frank Miller’s The Dark Knight attracted the actor to the project. Ben Affleck was supposed to play Batman in Snyder’s “Justice League” films, as well as in a solo Batman movie, in which he will also direct. However, after an unpleasant experience in the Justice League and personal problems, Ben Affleck eventually turned down the opportunity to make his own solo Batman movie, and later announced that he had completely turned down the role.

Related: No Superman at Comic-Con was a Huge Mistake (But Could be a Secret Genius)

However, Ben Affleck once again donned a cape and hood for the Snyder Cut, namely for the additional scenes of “Knightmare Timeline”. Affleck agreed with Snyder’s vision from the start, and it’s no surprise that he came back to help the director with the final version of “Justice League.” Shortly after Affleck’s return, it was announced that Ben Affleck was also going to return as Batman in The Flash, in which Michael Keaton was already supposed to play the role of the caped Crusader. Given how The Flash was expected to deal with the multiverse and alternate timelines, as well as most likely rebooting some elements of the DCEU and including Michael Keaton’s Batman in the DCEU canon, it made sense for Warner Bros. to turn to Ben Affleck as a way to get an in-universe explanation of why his version Batman will be replaced by a version of Keaton in future films such as Batgirl. “Aquaman and the Lost Kingdom” was originally going to come out after “The Flash” in a timeline in which Batman was Michael Keaton, but after the studio’s release date change, it most likely needed Affleck again to keep the DCEU canon consistent until the “Flash” reboot happened. on the screen.

Will Aquaman 2 and The Flash be the end for Affleck’s Batman?

Regardless of the reception of films like Batman v Superman: Dawn of Justice and Justice League, Ben Affleck is still the DCEU Batman-at least until The Flash. Batgirl, which comes out after The Flash, will play Michael Keaton as Batman and will see J.K. Simmons reprise his role in Justice League as Commissioner Gordon. This means that The Flash will change the timeline, creating a DCEU in which Michael Keaton has been Batman all along. In fact, after Aquaman and the Lost Kingdom and The Flash, everything points to Ben Affleck’s Batman being wiped off the face of the earth. However, that doesn’t necessarily mean Ben Affleck will never play Batman again, especially if the DCEU continues to toy with the idea of a multiverse.

DC is trying to get away from Affleck’s Batman, as Matt Reeves’ Batman and Michael Keaton’s Batgirl prove. However, before the premiere of The Flash and the disclosure of the franchise’s plan for the future, Ben Affleck is the Batman of the DCEU. Fortunately, Ben Affleck is still willing to don the Batman cape for films like Aquaman and the Lost Kingdom and The Flash, even if for small roles, which greatly simplifies this transition.

RHOA: Why Kenya thinks she doesn’t look much like her ex-husband...

Netflix’s Persuasion (2022): Where Do You Know the Cast