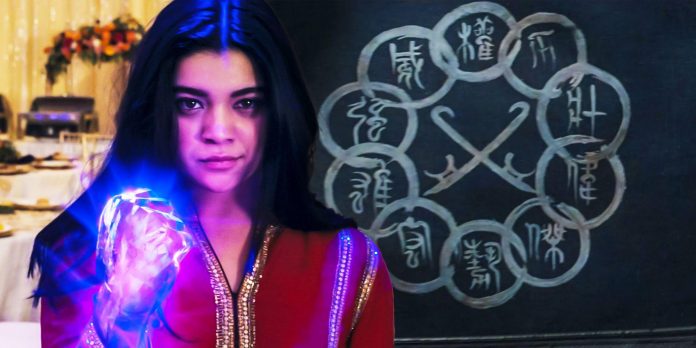 Warning: spoilers for the third episode of “Miss Marvel”.

In episode 3 of “Miss Marvel”, an amazing Easter egg “Ten Rings” was shown, which may have important consequences for the future. Known as the Mandarin’s signature weapon in Marvel comics, these powerful pieces of alien technology finally gained a place in MCU history when they made their live-action debut in “Shang Chi and the Legend of the Ten Rings.” They are now in the possession of Shang-Chi Simu Liu.

Shang-Chi is not the only new Phase 4 character who has become the unlikely owner of a priceless MCU artifact. In the premiere episode of “Miss Marvel”, Kamala Khan, played by Iman Vellani, acquired a bracelet of unknown origin. According to the MCU’s interpretation of the Quasar quantum bands from Marvel comics, a very popular bracelet made Kamala the target of a group of djinn wishing to return to their home dimension. By officially introducing the Genie to the MCU in the third episode of Miss Marvel, the series helped give at least some insight into the bracelet. As many suspected, this is one of the pair. It has not yet been proven whether the djinn created them, but now it is known that they brought them to Earth.

The scene in which the genie found Miss Marvel’s bracelet refers to Shang Chi and the Legend of the Ten Rings. A quick glance from above confirmed that the image of the Ten Rings of the Mandarin was carved on the floor of the temple in India, where the bracelet was located. The idea that the Ten Rings are somehow connected to the Genies creates an important connection between Ms. Marvel’s contribution to the MCU myths and existing MCU knowledge. It also adds a bit of history to the most mysterious element of the Shang Chi story. One thing the movie never explained is where the Ten Rings actually come from.

The MCU’s Ten Rings need a proper backstory, and Ms. Marvel’s Easter egg in Episode 3 serves as a step towards that before Shang Chi 2. The Ten Rings were the driving force behind the story of the first film, but they were also the focus of Shang Chi’s biggest unanswered question. Although it is unlikely to be in the sequel. As the scene after the credits of the first film showed, the Ten Rings send a beacon to an unknown party, which may soon go to Earth-616. It was logical that these characters would be Makluans, since it was these dragon-like creatures that were created in the comics, but nothing is known about their origin.

Regardless of whether it was the Makluans or the genies who created the Ten Rings in the MCU, Ms. Marvel’s reference to Shang Chi points to the basic connection between the respective angles of the two MCU characters. By exploring this in “Shang Chi 2” or perhaps in upcoming episodes of the Kamala Khan show on Disney+, Marvel has the opportunity to further flesh out two new Phase 4 additions to MCU lore. It can also meaningfully link their history and origin, which may become relevant later, especially if there is ever an intersection.