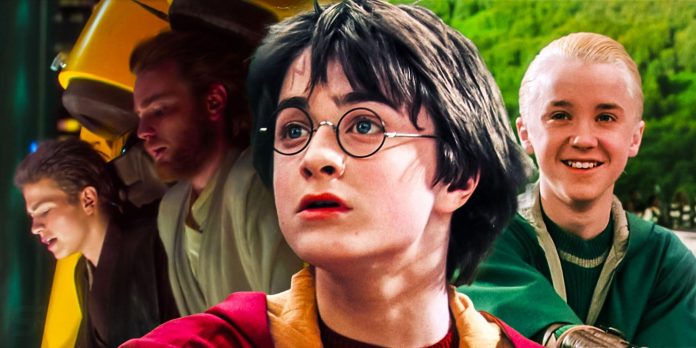 The films “Star Wars” and “Harry Potter” are known for their memorable musical accompaniment, and one special remark can be found in both “Star Wars: Episode II — Attack of the Clones” and “Harry Potter and the Chamber of Secrets”. Both films were released in 2002, the music for them was also written by the legendary composer John Williams. The overall musical cue is almost identical in both films due to the same tempo and energy of the two scenes, but in each film it is slightly different, which highlights the difference between both scenes.

The music for most of the films in the “Star Wars” franchise is written by John Williams, who wrote the music for all three trilogies, and also created the Han Solo theme for “Han Solo: Star Wars: Stories”. The music for various additional films of the “Star Wars” franchise was written by Peter Bernstein, Kevin Keener, Michael Giacchino and John Powell, whose soundtracks reflected the essence of “Star Wars”, as well as the work of Williams. Williams wrote the music for only the first two Harry Potter films, but his signature leitmotifs were used by his successors throughout the franchise.

Related: Harry Potter: The Basilisk Never Killed Anyone – Explanation of the Theory

“Attack of the Clones” features a memorable line from the track titled “Killer Zam and the Coruscant Chase”, while Obi-Wan Kenobi and Anakin Skywalker pursue Zam Wesell through Coruscant after her unsuccessful attempt to kill Padme Amidala. In “The Chamber of Secrets” there is an almost identical replica in “Quidditch, second Year” during part of the Quidditch episode of the film. The two scenes, although completely different, have an equally frenzied tempo, which, combined with their common composer, explains their almost identical musical cues. However, some of the differences between their context are subtly expressed with a small difference between the two estimates.

Although the lines are almost identical, the key difference between them is that the music of “Attack of the Clones” has a lower tone than its counterpart from “Harry Potter”, and this difference emphasizes the tone of the two scenes. In “Attack of the Clones,” Anakin and Obi-Wan try to catch one of the deadliest bounty hunters in the galaxy (who works as a subcontractor for an even deadlier mercenary) after she nearly killed a priceless politician (and their close friend) for the second time, making the chase stakes extremely high. In Harry Potter, the higher-pitched version resembles Harry Potter’s mindset when he competes with Draco Malfoy for the Golden Snitch, while a rogue bludger chases him, threatening serious injury. The different tones emphasize that while both scenes are serious, one is much darker and potentially more far-reaching than the other.

This won’t be the last time the replica will appear in another property with a slight change. In “Star Wars: Clone Wars,” Kevin Keener, who used to compose exciting new themes for the show’s characters and planets, brought back Williams’ music from “Attack of the Clones” for the season 1 episode “The Hidden Enemy.” Parts of the theme were high and others were lower, expressing the reluctance of the clone troopers Rex and Cody as they defeat their traitor brother Slick in a tense brawl.

Similarly, Williams reused one of his Star Wars lines in 1978’s Superman. When Superman pursues the nuclear warheads captured by Lex Luthor, the score is very similar to the scene from “New Hope” when Luke Skywalker turns off his guidance computer while escaping through the trenches of the Death Star. In this case, as in the second Star Wars prequel and the Harry Potter film, Williams remade one of his musical fragments to match a similar scene in the film. All this emphasizes that music can not only be processed to obtain different properties, but also how subtle shifts can fill it with different meanings.

Resident Evil 2, 3 and 7: comparison of the next generation...