Home Entertainment Why Obama ended up in a burnout paradise 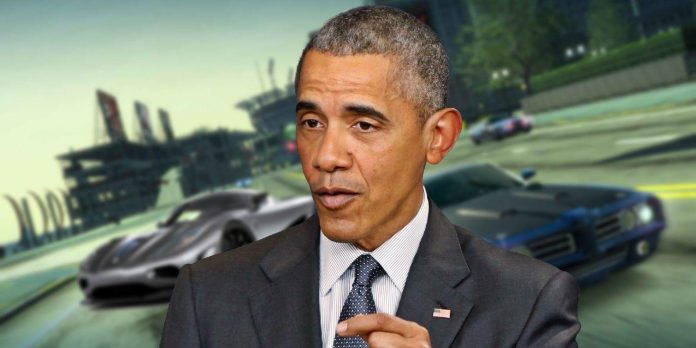 Although Burnout Paradise most likely never attracted attention as a politically oriented game, the popular racing game from EA and Criterion Games once featured former US President Barack Obama on an election campaign billboard. The launch of the game in 2008 may be in the rearview mirror for many, long enough for this particular incident to probably be completely forgotten by most fans, but it remains one of the strangest moments in modern gaming history.

Burnout Paradise is talking again about the recent releases of Burnout Paradise Remastered, which were launched on PlayStation 4, Xbox One and PC in 2018, and then again on Nintendo Switch in 2020. splash in its latest iteration, its initial release was widely recognized not only as a solid racing game, but also as a game in which the concept of an open world (or perhaps an “open city”) was used in a new and innovative way for that time.

But it also showed in-game ads in a way that was not usually done, and is generally not the norm for games (with the exception of mobile and free games) even now. Collaborating with the IGA Worldwide advertising network, EA sold advertising space that hosted various ads from IGA partners, including Burger King, Diesel and even CompUSA, an old retail chain that began seriously closing stores around the same time as Burnout Paradise. came out. But the most memorable ads can easily be attributed to the team of Barack Obama’s political campaign, which was one of the first cases when a real politician used in-game advertising to attract a new audience.

As documented by ampol_moment on Twitter, Barack Obama’s presidential campaign placed several commercials in Burnout Paradise at a historic moment for video games. No candidate has done this before (with the exception of Second Life, which, despite its popularity, was far from a massive gaming experience), and the Obama campaign not only used Burnout Paradise as an opportunity, but also a small number of other games, such as NBA Live 08, another EA property.

It’s easy to be cynical about in-game advertising. Such advertising is often seen as intrusive, and it is difficult to say that it does not distract. Many players also have strong concerns about the types of monetization associated with advertising, microtransactions and free content on both mobile and specialized gaming platforms. But even against this background, there is something unpleasant about the way politicians sometimes view games as a platform. Some groups on the conservative right have often tried to denigrate games or use them as a scapegoat to solve social problems, a problem both American and Japanese politicians have with children and games, and this has been more common on both sides of the aisle in past decades. . So it was a surprise when the Obama campaign decided to make such a strong push to reach a demographic that is largely ignored (and in some cases still remains) by politicians.

The willingness of the Obama campaign to try something new seems to be quite a sharp contrast to other politicians and political groups who were not inclined to use games as a means to reach their audience or even actively hostile to this idea. A representative of Trump’s campaign headquarters went so far as to hint that gamers—albeit generous in interpretation—are secondary to the problems of the campaign, saying (according to DW) that they want to stick to the real world “with real Americans.”

Nevertheless, many “real Americans” probably played and still play video games, and this was demonstrated by other politicians who decided to use new technologies that allow advertising on gaming platforms. The Biden-Harris campaign is one such example, following the example Alexandria Ocasio-Cortez, a Congressional representative from New York’s 14th District who used Animal Crossing: New Horizons for political work in several notable cases to reach out to their constituents.

Biden’s campaign also decided to reach out to the gaming community rather than keep it at arm’s length by creating Animal Crossing villagers who looked just like the presidential candidate and his running mate Kamala Harris. Initially releasing a design of signage that players could use in the game to support the cause, the Biden campaign also created its own island where players could actively come and meet with virtual candidates. Ocasio-Cortez (or AOC, as it is more often called on the web) even addressed people directly, visiting the players’ islands and leaving personal messages on their community boards.

Tokyo Game Show will also have online event in 2021