Home Entertainment Why Metallica’s song was the only choice for the Season 4 finale... 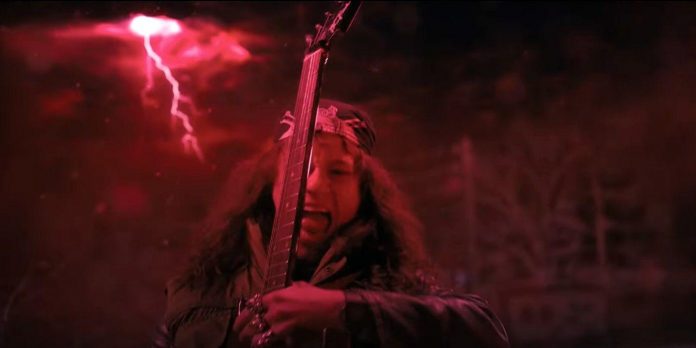 Metallica’s “Master of Puppets” was a non-negotiable for the unforgettable climactic sequence in the Stranger Things season 4 finale, says the series’ music supervisor. Created for Netflix by the Duffer Brothers, Stranger Things has taken the world by storm since season one debuted in 2016, with the two-part season 4 having completed its run on July 1st of this year. The show is set in the 1980s and revolves around several supernatural events occurring around the fictional town of Hawkins, Indiana, and its connection to an alternate reality known as the “Upside Down.” Stranger Things has received universal acclaim throughout its four-season run, with a fifth and final season currently in the works.

The series’ fourth season saw the return of the main cast, including the likes of Winona Ryder, David Harbour, and Millie Bobby Brown, to mention a few, while newcomers to the show included Jamie Campbell Bower, who plays season 4’s main antagonist Vecna, and Joseph Quinn, who became an instant fan-favorite after playing the role of Eddie Munson. The Stranger Things season 4 finale saw Eddie and Dustin attempt to divert the bats in the Upside Down away from Steve, Nancy, and Robin, who are trying to get into Vecna’s lair. To draw the bats towards him, Eddie performs Metallica’s iconic 1986 track “Master of Puppets,” on the top of his trailer in what has now become one of the show’s most memorable scenes.

While speaking to Variety in a recent interview, Stranger Things music supervisor Nora Felder explains why the inclusion of the Metallica track “Master of Puppets” was unchangeable. She revealed that the Duffer Brothers had written the scene with the song in mind to enhance the “hair-raising” and “thrilling” nature of the sequence. She also expressed that the song was “a perfect match” for Eddie’s character and fierce “public persona.” Check out the full quote below:

“It was another one of those ‘it has to be this song,’ moments. This part of the story was anticipated to be a pivotal and especially hair-raising scene in which Eddie heroically stood tall for the fight of his life. I believe the Duffer Brothers felt that playing ‘Master of Puppets’ throughout the extended scene was the clear choice. No other song was discussed further, and we jumped in to clear it straight away.

The track was a perfect match for Eddie since it not only amplified the episode’s most thrilling scene, but in some ways, aligns with Eddie’s seemingly arrogant and edgy in-your-face public persona.”

Felder also points out the importance of how Eddie’s performance helped him revitalize some of his well-preserved characteristics “of love, care, and courage.” Her comments make perfect sense given Eddie’s reluctance to play the hero early on in the season. While finding the right song for Eddie doesn’t sound like an easy task, the Duffer Brothers stuck to their guns with their first and only choice which looks to have paid dividends as “Master of Puppets” seamlessly matches the character’s larger-than-life and heavy metal-inspired personality which was established from the very first episode of Stranger Things season 4.

“Master of Puppets” isn’t the only track from the ’80s to have gathered renewed attention after the season’s conclusion, as the above-mentioned scene in Stranger Things immediately followed in the footsteps of yet another sequence from season 4, which involved Sadie Sink’s Max escape from Vecna’s mind by listening to Kate Bush’s “Running Up That Hill.” With the Metallica sequence, however, the Duffer Brothers have proved their consistency in integrating iconic tracks as a part of their storytelling. The duo have set quite a high bar, but their undoubted talent means that viewers can expect plenty more music-centric set-pieces when Stranger Things season 5 eventually debuts.