Home Entertainment Why Kenny Can Leave the Cobra Kai Dojo Forever in the Fifth... 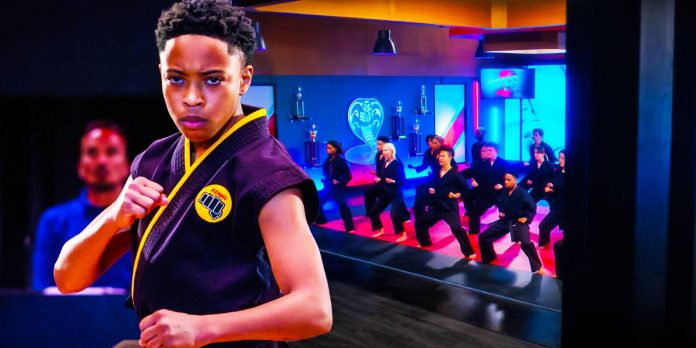 In the 4th season of the Netflix series “Cobra Kai”, viewers get acquainted with an outstanding student Kenny Payne (Dallas Dupree Young), and in the 5th season a new karate kid may have to make an important decision regarding the dojo. the ward of Robbie Keane (Tanner Buchanan). While Kenny is a favorite student of Terry Silver (Thomas Ian Griffith, Cobra Kai), there is reason to believe that the relationship may not be as stable in Season 5 of Cobra Kai as it seems in the Season 4 finale.

Kenny is first introduced as a cute newcomer to the city who loves video games and anime. This image quickly deteriorates after his brother Sean (Okea Aime-Aquari) suggests that he team up with Robbie to learn how to defend himself from bullies in high school, one of whom is Anthony LaRusso (Griffin Santopietro). Despite the fact that Chris (Martin Cove) mostly underestimates him, Terry Silver sees potential in Kenny and takes him under his wing.

Terry Silver’s focus on Kenny may mean trouble on the part of the villain in the fifth season of Cobra Kai, since by the end of the fourth season, Sensei Silver goes on the warpath and commits legitimate criminal offenses. Such erratic behavior could allow Kenny to see that his talents could be better used elsewhere. By the end of season 5 of Cobra Kai, Kenny could surprise everyone and join the Miyagi-Do team. Kenny is presented as a good child, so his kind nature can prevail over the aggressive upbringing of Cobra Kai. Anthony seems to be starting a new life after trying to apologize to Kenny in the Season 4 finale. Although Kenny didn’t accept the apology, it could still allow him to see that people can change. After some introspection and perhaps some evidence that Anthony had changed for the better, Kenny was able to realize that he didn’t need to bully others as much as he did.

How Robbie Can Lead to Kenny Leaving Cobra Kai

Kenny has parallels with Robbie in Cobra Kai, who left his original dojo and sensei. Robbie even states in the Season 4 finale that watching Kenny fight aggressively is like looking in a mirror. Robbie is remorseful for this and for encouraging Kenny to act in accordance with his hatred and anger. In the teaser trailer for the fifth season of the series “Cobra Kai”, Robbie goes on a journey with Johnny (William Zabka). This may indicate a split with the Cobra Kai dojo, which may lead to Robbie’s reunion with Miyagi-Do. If Robbie comes back, it’s not hard to think that he might take his mirror image with him.

The fifth season of Cobra Kai is just around the corner, and Kenny’s fate will soon be known. The world of Cobra Kai and Terry Silver’s dojo will be too big for him, and Kenny will leave Cobra Kai with mentor Robbie. The debate about nature and parenting continues in Kenny’s story, and only time will tell which side he is on.

What fans hope to see at the reunion of the 12th...