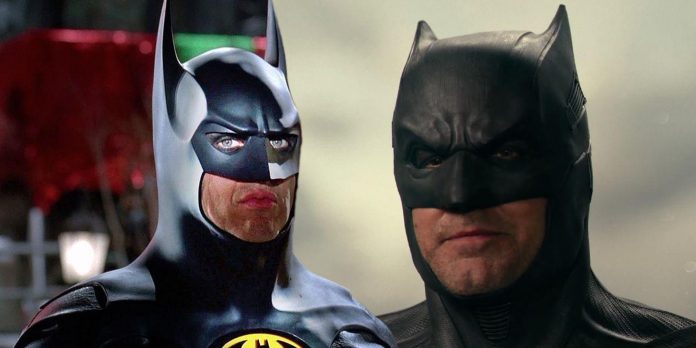 Michael Keaton is actually the best Batman replacement for Ben Affleck in the DCEU, and he will only strengthen the role of the hero in the franchise. One of the first major controversies in the DCEU was the negative reaction to Affleck’s Batman in Batman v Superman: Dawn of Justice—a much darker hero obsessed with stopping Superman and wanting to break the infamous Dark Knight rule of “don’t kill.” Although the consensus on Affleck’s Batman later shifted to a more favorable opinion, the character was forever overshadowed by such an initial reaction.

After Ben Affleck’s solo Batman movie was not realized, the actor announced his retirement from the role. It was decided to replace Affleck’s Batman with another version in the DCEU, ensuring that the DC franchise will not be without one of the most iconic characters. This paved the way for Michael Keaton’s return to the role, aided by the Flash’s multiverse narrative, three decades after he last played the role in Batman Returns.

Replacing Batman performed by Ben Affleck is not an easy task, but it seems that the DC film universe may have found the perfect solution, even despite the controversial cancellation of “Batgirl”. Not only does Keaton’s Batman have a number of similarities to Affleck, he is also a character capable of solving a number of the DCEU’s most pressing problems. While Affleck’s Batman deserves more, replacing him with a version of Michael Keaton’s character is actually the best way to continue the DCEU as a whole.

Using the previous Batman is better for the franchise

One of the biggest obstacles to replacing a character as important to the DCEU as Batman is establishing who the new version is and why he is a worthy successor, but the return of Michael Keaton anticipates this. Two films have already been made about Keaton’s Batman, so there is no need to explain the character’s backstory or his origin, since this has already been done in Tim Burton’s Batman and Batman Returns films. Since Keaton’s Batman just comes from another universe, there’s no need to revisit old ground, and it also doesn’t make Burton’s films a DCEU canon, which saves a lot of messy exposure.

The return of Michael Keaton in the role of Batman not only saves time, but also practically guarantees an increase in the audience. Those who liked Burton’s films, but have not followed the DCEU until now, will be tempted to return, especially since the prospect of his return in 30 years is incredibly tempting. Flash is free to explore Keaton’s Batman story as much as he needs, which makes the return of the previous Batman much better than the alternative.

Another reason Michael Keaton is the perfect replacement for Ben Affleck in DCEU is that their versions of the hero have a number of common features. Both characters are older incarnations of Batman, in the later stages of their careers, which means that both are very experienced and grizzled veterans of vigilantism. Moreover, the characters of Keaton and Affleck are known to have violated Batman’s “don’t kill” rule, which made their approach to fighting crime similar.

By using an alternate Batman so similar to the original DCEU, the franchise provides a relatively smooth transition from one to the other. Incorporating the tone of Keaton’s character into the DCEU world will still require some work, but the similarities between the two heroes will help ease the passing of the torch. Creating a new DCEU Batman that is not too far from its first one is a smart decision and will help maintain a sense of narrative and tonal continuity.

How Keaton Will Be an Improvement for DCEU

There are elements in Michael Keaton’s Batman that will really help fix a number of the franchise’s worst problems. The most common criticism of the DCEU, including its characterization of Batman, is that everything is too dark and serious. The lack of levity, especially in Batman v Superman: Dawn of Justice, has been a major contributing factor to the DCEU’s problems, and Ben Affleck’s Batman is the franchise’s biggest source of unnecessary concern.

However, Keaton’s Batman, while similar in some ways, is slightly different in some ways, which makes his version of the character the perfect savior for the DCEU. Clearly Gothic, but definitely less serious tone of Tim Burton’s films Batman has introduced an unusual take on Gotham City and its most famous vigilante, and this slightly more lighthearted approach to Batman’s darkness is what will hopefully lead to a better future for the DCEU. Keaton’s Batman should help mitigate some of the unnecessary rigidity of the DCEU, and that can only help the franchise as it evolves.

The 15 most popular Harry Potter ships according to AO3