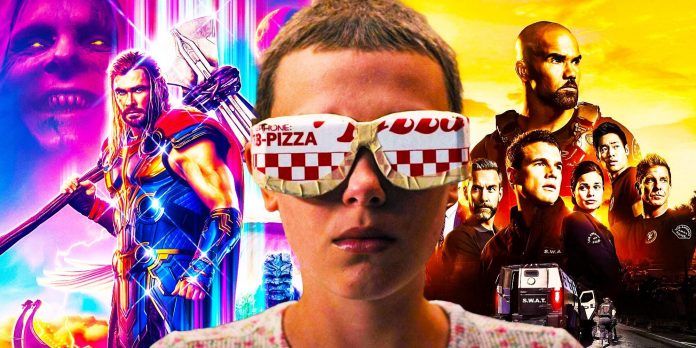 Streaming has been blamed for the death of theaters and broadcast television, but as the streaming industry grows it’s become evident that’s not actually the case. While the arrival and meteoric rise of Netflix and other streaming platforms was a major disruption for traditional media in theaters and on TV, more legacy media companies are shifting to streaming platforms of their own and streaming has begun adopting a number of the same industry practices it was accused of killing.

Movie studios and television networks existed for decades as the gatekeepers of content, with a few entrenched giants developing a virtual stranglehold on their respective sectors before the arrival of streaming. Access to box office or television audiences typically required content be approved and funded by big studios or TV networks, making distribution far more difficult. Thanks to the streaming content wars, quality content became available for a far more affordable single monthly price from the comfort of home, which quickly began to suck consumers away from established revenue models.

Related: Everything About 2022’s Box Office Is Awesome Except The Revenue

Despite this initial shock, as the streaming industry matured it started to look a lot more like the very industry it initially disrupted, albeit with some key differences. While the future of movies and TV certainly looks a lot different than it did historically, it turns out streaming’s success doesn’t signal the death of either industry, but it does mark a serious evolution to the way things are done.

How Streaming Disrupted the Movie and TV Industries

Before the advent of home video, access to Hollywood movies was virtually entirely restricted to movie theaters, which is a large reason behind older movies having much longer box office runs and massive movies like the original Star Wars or E.T. would remain in theaters for as long as an entire year. Likewise, television broadcasts were almost impossible to see if they weren’t caught as they aired, so shows like M*A*S*H still hold the record for most-watched series finales in history with over 100 million live-views in 1983 while modern hits like Game of Thrones, which has HBO’s most-watched finale of all time, didn’t even get 20 million live viewers.

The ability to record live TV to watch later (and fast forward through commercials) and rent movies from video rental stores like Blockbuster gave audiences a new outlet for their home entertainment, which is likely at least partially to blame for theater attendance and TV viewership beginning to dwindle even before Netflix began streaming online. Access to new, high-quality media for a single monthly subscription price changed the game even more.

When COVID-19 shut down theaters around the world, some companies like HBO Max began releasing movies made for theatrical release on streaming, which was seen as a major hit on theaters, which traditionally enjoyed a healthy exclusivity period to prevent that kind of competition. Theaters have since opened back up, but with drastically reduced exclusive windows. Not only are theatrically released movies hitting streaming sooner, but made-for-streaming movies (traditionally considered a sign of inferiority) are getting bigger and bigger budgets, packed with star power, and created by big-name directors. The most recent example being Netflix’s The Gray Man, which has a $200 million dollars, which is more typical of bigger theatrical blockbuster budgets. Directed by Joe and Anthony Russo following their massive success on Avengers: Infinity War and Avengers: Endgame, the movie also features some of the industry’s hottest actors in Ryan Gosling, Chris Evans, and Ana de Armas. A few years ago, The Gray Man would be an anomaly on streaming, but in 2022, it’s actually fairly common, particularly on Netflix.

Streaming Killed The Ability to Measure Movie and TV Success

The disruption of streaming didn’t only eat into the profits of traditional TV and movie content but also destroyed most traditional measurements of success. Historically, movie attendance was measurable by box office reports on ticket sales and all television was viewed by broadcast or cable and measured by surveys like Nielson, it was far easier to quantify media performance and audience size. Once audiences were segmented out into a variety of streaming services, the only people with access to accurate audience information became the streaming platforms themselves. Since that kind of data has traditionally been leveraged as a sign of success, streamers have little incentive to make it accessible to the public outside of press releases, in which case it’s typically spun in the most positive way possible, citing odd statistics like “most views initiated in the first 24 hours” or “most total minutes watched,” avoiding direct comparisons that provide too much context outside of the desired angle.

Related: How Netflix Has Been Preparing For Its Big Inevitable Subscriber Drop

On one hand, this makes it hard for movie analysts and audiences to evaluate the success of any given movie or show, but on the other hand, it avoids diminishing any particular content by reducing it to its financial success. Since streamers use this same data to segment audiences into specific categories and target content to those groups instead of making everything with as wide of an appeal as possible, more traditional measurements of success don’t necessarily apply anyway, since a movie with low viewership might be targeted at an underserved audience, resulting in more total sign-ups for the streaming service than something that solely serves customers who are already subscribed. Even if more transparent data were available, different sized subscriber bases for each platform means viewership numbers aren’t directly comparable between streaming platforms, whereas historic TV ratings or box office numbers represented basically the same monolithic audience.

Streaming Didn’t Kill Movies or TV, It Just Forced Them to Adapt

In an ironic twist, while streaming initially ate into the profits of TV and movies, the disruption forced Hollywood and television networks to evolve and adapt, launching streaming platforms of their own, also forcing streaming to adapt to new competition. Netflix popularized the binge drop method of releasing an entire show at once, taking advantage of the fact that it wasn’t necessarily to string audiences out with a drip feed to maximize ratings and ad revenue, but as other platforms joined the fray, some started following more traditional weekly release models, capitalizing on the water cooler effect of social media. Likewise, while streaming content was historically ad-free, competition on price also prompted streaming services to launch cheaper ad-supported tiers, resembling the ad-supported model of traditional TV networks.

HBO Max releasing every WB movie to streaming and theaters simultaneously in 2021 followed by shortened theatrical windows in 2022 is a big sign of things to come. Even theatrical releases like The Batman are going to streaming when they’d make millions more by extending their box office run, seeing huge success on streaming as well, revealing a hybrid distribution model that realizes the best of both worlds could be the future of movie distribution. To bring everything full circle, streaming platforms like Netflix don’t only plan to launch ad-supported plans, they’re also looking into releasing more movies on the big screen as well, meaning WB’s release plan for The Batman could become a more common practice, even for Netflix, which was long-blamed for the decline in theater attendance and ticket sales in the first place.

In the end, legacy media companies have shifted their focus to streaming in response to competition, and streaming companies have begun to adopt the same traditional distribution practices they initially upended. This means the legacy of streaming was never going to be the death of movie theaters and TV, it was just a disruptive force to reshuffle the deck and force entrenched power players to modernize their distribution for the internet age while opening the industry to more competition from newer players.

The theatrical exclusive release of movies like Top Gun: Maverick proves audiences will see big movies in theaters if it provides a thrilling theatrical experience. Streaming can never replicate that on the small screen, but that doesn’t mean companies like Netflix can’t have a piece of the box office pie, while companies like Warner Bros. and Disney likewise diversified their distribution models to share a piece of the streaming pie. When the dust settles, the industry won’t look like it did a few decades ago. Box Office revenue will still be down from historic levels and audiences will be far more divided across a number of platforms, but the traditional theatrical movie model and ad-supported television model are likely here to stay for the foreseeable future now that the industry is adapting to the new streaming reality.

Neil Gaiman explained why there was no “Sandman” movie.