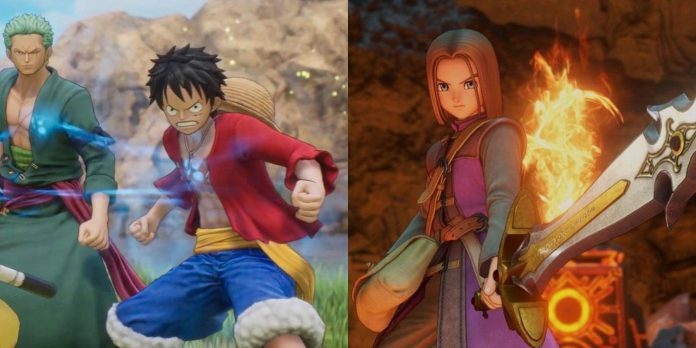 One Piece Odyssey bears a strong resemblance to Dragon Quest XI: Echoes of an Elusive Age, and there are several reasons for the similar visuals in both games. One Piece Odyssey is a turn—based Japanese role-playing game that will be released on PC, PS4, PS5 and Xbox Series X/S, on which Dragon Quest 11 is available. At the moment, Dragon Quest 11 has turned several years old. It’s unclear if One Piece Odyssey will launch on the Nintendo Switch, but it seems likely given the system’s huge audience in Japan, as well as the incredibly popular One Piece in the country.

One Piece Odyssey is a video game featuring a plot and original characters created by One Piece author Eiichiro Oda. The story follows the Straw Hat Pirates at a point in time after the timeskip, but before Jimbei officially joined the team, as he has not yet been seen in any of the trailers. The crew is shipwrecked on a mysterious island, separating Monkey D. Luffy from the rest of his crew. He must search the island for his missing friends, but it will not be easy, as the ruins there are guarded by wild animals, as well as bizarre golem-like creatures.

All the characters of One Piece Odyssey reflect their characters from anime and manga, however, fans have noticed that the game bears a striking resemblance to Dragon Quest 11. The main Dragon Quest games are not inspired by any particular anime, although they are closely related to one of the most popular manga and anime franchises of all time – through Akira Toriyama. Unsurprisingly, there are visual similarities to One Piece Odyssey, but there is another reason why these two games look the same.

Both One Piece Odyssey and Dragon Quest 11 are being developed by the same company — ILCA, the same studio that developed Pokémon Brilliant Diamond and Shining Pearl for the Nintendo Switch. These two games have a similar style of play and both are developed using Unreal Engine 4, so it’s not surprising if ILCA reused resources and changed them to shorten the development time of One Piece Odyssey. ILCA is known for creating anime-style games, as this studio has also worked on Code Vein and The [email protected]: Starlit Season, so this type of games is her specialty.

Another reason for the similarity is related to works of art. The character and monster designs in the Dragon Quest series are mostly created by Akira Toriyama, the creator of Dragon Ball. Oda called Toriyama one of the most influential people, and in the past they even worked on the crossovers One Piece and Dragon Ball. Toriyama’s work has had a huge impact on Ode, so it’s not surprising that there are similarities in their work and character design. ILCA has done a great job bringing Toriyama’s artwork to life in Dragon Quest 11 and they seem to be doing just as well with One Piece Odyssey.

Primordial: Why Klaus and Hayley would be perfect together (why they...