Home Entertainment Why is Luther so much weaker than No. 1 Sparrow Academy 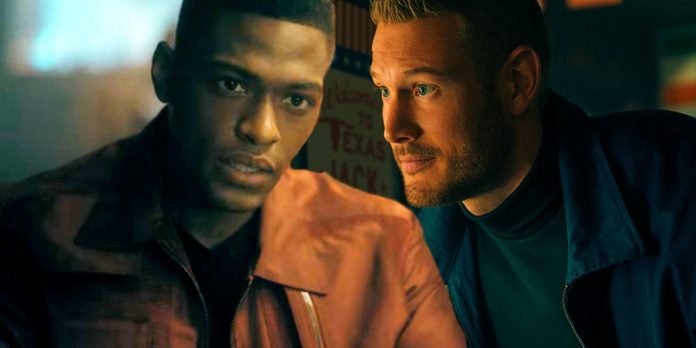 In the third season of Umbrella Academy, Luther was noticeably weaker than the number one of the Sparrow Academy, Marcus. Theoretically, the strength of Umbrella Academy’s leader should have outweighed Marcus, given that Luther also underwent surgery to replace his body with a gorilla’s body. However, the third season proved the opposite and showed that the two academies have very different strengths and weaknesses.

After the apocalyptic events of Season 2, the 3rd season of Umbrella Academy began with an introduction to Sparrow Academy. In another timeline, Umbrella Academy’s father, Reginald Hargreaves, raised seven more siblings. They didn’t necessarily have the same abilities as their counterparts from the parallel timeline. For example, the number Three Sparrow Academy, Fey, did not have the same abilities as Allison, the number Three Umbrella Academy, because although Fey could create and control ravens, Allison still retained the power of rumors. However, Luther and Marcus—both number 1 in their academies—received very similar abilities, as both possessed superpowers and apparently increased stamina. Thus, many viewers were probably surprised when it turned out that this did not equal equality in the battle between them.

The reason why Luther is weaker than the number One Sparrow Academy is because the latter not only had increased strength, but also increased agility and strategic skills. The battle between Luther and Marcus in the Season 1 episode 3 of Umbrella Academy showed that there was almost no rivalry between them when Marcus completely defeated Luther, and the different level of effort Reginald put into teaching Sparrow Academy was a serious reason for this. This was especially evident when Luther was captured in the episode ​​​​2 by several members of Sparrow Academy and quickly discovered that the team had facilities that Umbrella Academy never had, and the training regime they had been in since Reginald adopted them.

It was clear that when faced with a well-trained strategist, Luther was unable to approach the battle with the strength he always used to win battles. However, the Sparrow Academy was taught to rely more on everything at their disposal, as the fifth episode featured a case between Ben and Jamie from the Sparrow Academy, where Reginald insisted that they fight to the limit of their abilities. Although Umbrella Academy had received some training, they had never been subjected to such a thorough analysis. Similarly, Pogo-an advanced chimpanzee and Reginald’s friend in the original timeline-did not play the same role in the Umbrella Academy season 3 timeline. At the Vorobyov Academy, Pogo acted not so much as a close assistant to Reginald, but as a coach. As a result, Sparrows were more skilled in combat and were able to use their powers much more effectively than Umbrellas at the same age.

The reason why Luther was much weaker than his colleague from Sparrow Academy was because of the significant difference in combat training in their childhood. The father of Umbrella Academy has always been a complex character throughout the Netflix series, but his desire to “experiment” with the abilities of his charges raised moral questions for an audience that grew up to care about the original seven. The various results of Reginald Hargreaves’ experiments were fully demonstrated in the third season. With more training, the abilities of those with incredible strength should be supported not by the fortitude that Luther possessed, but by the increased fighting prowess of Marcus. At the same time, in the third season of Umbrella Academy, it becomes clear that the members of the Sparrow Academy also suffered from many negative consequences of Reginald’s training, which means that they still have to pay a personal price for these expanded abilities.

Why fans of “Welcome to Plattville” say that the series is...