Home Entertainment Why Individual Workouts are changing the rules of the game for the... 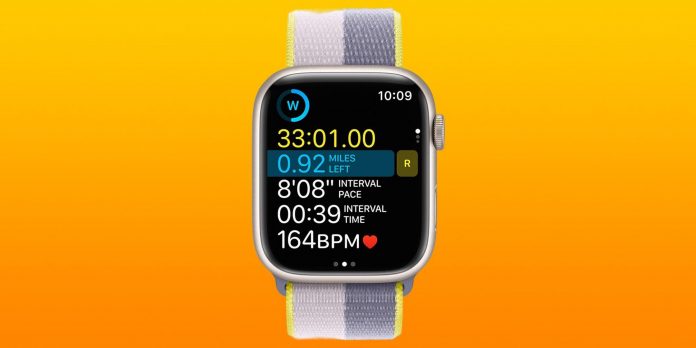 It is planned that Apple Watch will receive many new fitness-oriented features in watchOS 9, and one of the most important is the ability to create your own workouts to accurately track high-intensity interval training (HIIT). It’s relatively easy to put an Apple Watch on your wrist and go out for a jog or walk every day, perfecting the same route at the same speed every day. However, this may not be the best way to improve the functioning of the cardiovascular system. It is best to alternate it with a varied training plan to see tangible results in running or walking. An approximate workout plan may include short and fast runs, long and slow runs, and interval training, but the Apple Watch has struggled with tracking interval training since its release.

In watchOS 9, users can track interval workouts using their own workouts in the native Workout app. It comes along with a range of new features designed for runners that have been pre-announced in the upcoming release of the software, which will become publicly available in the fall. watchOS 9 was announced and presented at the Worldwide Developers Conference in June at Apple Park with new indicators for runners, including vertical oscillations and stride length. The way users can track workouts has also changed with the introduction of race routes and a virtual pacemaker. In addition, the new running mode, designed specifically for high-intensity interval training, eliminates one of the biggest drawbacks of the Workout app and changes the rules of the game for people who are serious about cardio training.

The “Workouts” application in Apple’s watchOS 9 allows you to create individual workouts that are most suitable for high-intensity interval training, which are characterized by intense loads and rest periods for recovery. For example, while in normal running the goal is to maintain the desired pace and load level throughout its duration, during HIIT the goal is different. Instead, runners tend to put in as much effort as possible at a predetermined interval, and then rest. In previous versions of watchOS, these types of workouts were extremely difficult to track. Apple Watch users can either leave the workout and skew the averages up, or pause the activity and skew the averages down. Any choice left the runner with final data that did not really reflect the training he had completed.

An athlete can structure individual workouts to reflect the activity they plan to perform. This separates the high intensity interval data from the rest interval data, which is more reflective of the actual workout. In other HIIT implementations, you can individually set a target time or distance for each person before going on the road, to the track or to the treadmill. However, Apple did not specify to what extent users can customize workouts. Based on the other features that come with watchOS 9, such as race routes and pacemaker experience, it would make sense for HIIT workouts to be fully customizable. Even if there are limitations, the result is better than the previous methods of tracking interval training on the Apple Watch.

This function is combined with new indicators, which are especially valuable for athletes participating in interval training. The Apple Watch will be able to track the heart rate zones that the user goes through during a workout, based on configurable boundaries or an estimate based on the user’s age. There is also a metric that tracks the power used during the interval so that the user can see the difference in load between the work and rest intervals. These new indicators complement existing ones, such as pace and pedal speed, to evaluate and improve the runner’s performance. Interval training was an area where the Apple Watch was sorely lacking, but with watchOS 9, it looks like HIIT tracking is finally on the smartwatch.

Good news for the Division 2 players