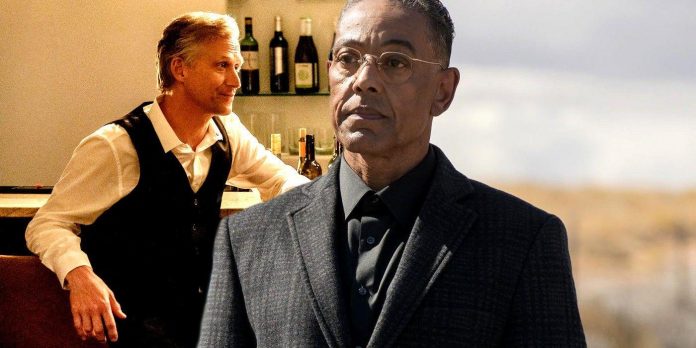 Why Gus Fring suddenly leaves the wine bar in the episode “Fun and games” season 6 of the TV series “Better call Saul”? The storm is finally over for Gustavo Fring Giancarlo Esposito. Having eliminated Lalo Salamanca in the previous episode, Gus sealed his victory when, at a meeting with Don Eladio, Juan Bolsa and Hector Salamanca, the big boss ruled that the Peruvians were responsible for Lalo’s death, having completely figured out Fring. Sensing a reason to celebrate, Gus visits his favorite wine bar, which he apparently hasn’t visited in a while (obviously), and orders a glass of red from Brett at the bar.

Soon “Better Call Saul” it turns out that the real reason Gus likes this particular bar is David, an employee and wine lover to whom Esposito’s character is clearly holding a candle. Listening to David’s chatter about cowboys, land and tractors, Gus looks as happy and relaxed as any other time the viewers of “Better Call Saul” could remember. Despite the obvious pleasure, Gus takes a sip of his La Landonne and suddenly leaves the place without even saying goodbye to David. There is no urgent situation, there is no sudden danger, there is no reason why Gus should be somewhere else. Why doesn’t he stay and keep making eyes at David?

The answer lies in the wine itself — Rene Rostaing La Landonne David pours specially for Gus. Describing the taste palette, David says: “Do you feel this meaty… almost bloody taste? The soil consists of iron oxide and manganese.” Then David leaves, Gus takes another sip, and that’s when his behavior becomes uncomfortable. Gus felt the bloody taste of wine and remembered his bloody work. The iron-tinged booze makes Gus think that an affair with someone like David is impossible for a million different reasons. Even if the lover agrees to Gus Fring’s dangerous job (unlikely) and Gus is able to keep it a secret (even more unlikely), the Chicken Man knows all too well that personal connections are a dangerous weakness in his industry. All these thoughts flash through Gus’s mind as he sips that bold glass of red, and he decides to stop torturing himself by flirting with a future he can’t have.

In the third season of Breaking Bad, Gus Fring invites Walter White to dinner at his home. Children’s toys can be seen in the background, and Gus even complains that the children are not enjoying his Chilean food, telling Walt: “You know how it is …” Viewers of the TV series “Breaking Bad” suggested that Gus was just using the character of family man Walter White, pretending that he has his own family. “Better call Saul” has already reinforced this theory, proving that Gus finally has no children just 4 years before the start of “Breaking Bad”.

Leaving David during a wine bar in the sixth season of “Better Call Saul” and refusing the opportunity to establish a personal connection almost confirms that Gus’s “children” were invented specifically for Walter White. “Fun and Games” shows that Gus understands that relationships are a weakness that potential authorities cannot afford, and this attitude is much better suited to his ruthless and calculating character in “Better Call Saul” and “Breaking Bad”. While it’s possible that Gus and David (or another partner) will get together during a break between shows and have several children, everything in “Better Call Saul” suggests that Gus lied to Walt and stayed alone until the very end.

Kelly Reilly from Yellowstone talks about the moment Beats from Season...