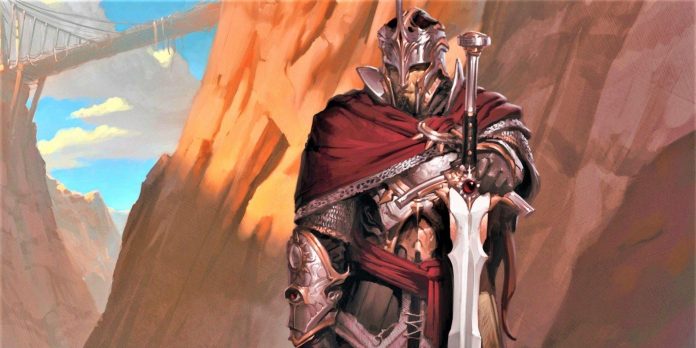 Many fans of Dungeons & Dragons don’t see how fun playing a Fighter can really be. The Fighter’s list of skills can lead many to write the class as a whole off as basic and boring when that’s simply not true. Just like any other class, a good roleplayer can make a Fighter very entertaining. The class also has a few perks that have been overlooked too often.

In Dungeons & Dragons, every class has a list of abilities that they gain as they level up. Most classes have a variety of unique and flashy abilities, such as the Monk’s Ki abilities and Monastic Tradition. However, the Fighter does not have many flashy abilities, with most of their level-ups granting them bonus stats, extra attacks, and Martial Archetypes. Although D&D fighters can quickly get overpowered, this makes the Fighter’s ability list look very repetitive, and can turn people away if they think it may not be exciting enough.

Related: D&D Now Has Deck Of Many Things Spells

Despite appearances, Fighters can be a lot of fun to play because of how versatile they are. Although their ability list may not look like much, they can be some of the most exciting characters to play in D&D, especially in the midst of combat. Fighters are far from boring in D&D, and a good player can play one to their fullest potential.

As one would expect, Fighters in Dungeons & Dragons have access to some of the most versatile combat options in the game. However, despite their lack of magical abilities, they make up for it with their own simple yet effective bonuses that they incur naturally. D&D characters don’t always need to be optimized, but these bonuses can make Fighters very strong very quickly. A Fighter can be easily customized to match a player’s preferred playstyle, whether they are an up-close bruiser or a bow-wielding sniper who stays out of trouble.

Fighters have proficiency with both Simple and Martial weapons from the start, so they can use almost any weapon in the game without spending feats to learn how to use it. Anything from a sword to a trident, or even something more specialized like a Whip can be a Fighter’s chosen weapon. This is even before a Fighter’s Fighting Style is added to the equation, opening even more options. There are simple ideas, like a bow-wielder taking Archer to make their shots more accurate. However, some of the more unique styles are where the fighter really starts to pop, with some even able to keep pace with D&D 5e’s best multiclass combos. Like Interceptor, which can make a fighter into more of a bodyguard that protects weaker party members, or Unarmed Fighting to become a weaponless brawler on par with a Monk.

Weapon Proficiency and Fighting Style are two traits that every Fighter has be default, and they already open up a wide variety of opportunities. This gives the class a strong starting point no matter what plans the player has in mind. Versatility is a huge asset in Dungeons & Dragons, and a Fighter can be molded into whatever the player wants them to be.

Once a Fighter in Dungeons & Dragons reaches their third level, they gain a Martial Archetype. This is significant because it more or less grants the Fighter a subclass that will grant them more abilities through the levels. Choosing the best D&D Martial Archetype depends on one’s goal for their fighter. This is where most of a Fighter’s most unique abilities will come into play, and where they can find a specialized role to excel in.

The Martial Archetypes grant fighters some incredibly interesting abilities to use. For example, the Arcane Archer is an evolved archer that can wreak havoc with several kinds of magical arrows. An Echo Knight can create a projection of themselves to either attack or defend from a distance. Psi Warriors can mix martial combat with psychic powers like a Jedi from Star Wars. These Archetypes add a large amount of flavor to the Fighter no matter which one they choose, making them a very unique warrior in addition to an even stronger combatant than before.

Similar to how bored D&D players can revitalize characters with subclasses, a Martial Archetype can give a Fighter a new lease on life. In fact, there are so many tricks that one can use with several of the Archetypes’ abilities that it opens more doors for the Fighter than before. Martial Archetypes are probably the most enthralling thing about the Fighter, and anyone playing as one should look forward to unlocking theirs to discover their true potential.

D&D Fighters Can Be Almost Any Sort Of Character Imaginable

When one thinks of a Fighter in Dungeons & Dragons, they may think of a fairly bland Human wielding a sword. Admittedly, many of the early sourcebooks depicted exactly that, which may have affected the Fighter’s reputation. However, D&D’s Fighter is definitely not boring, and they can come in just as many diverse flavors as any other class, with their personalities as versatile as their weapons.

Related: D&D: Which Radiant Citadel Adventure Is Best To Start With

Many fighters can be the typical sword-and-shield-bearing knights in shining armor, and many players could pull off that role with aplomb. However, the class has a huge amount of possibilities available for those who take it. One could play a duelist who deftly maneuvers through combat with the utmost confidence. Likewise, one could play as a disciplined psychic warrior with a strict code of honor that they refuse to break. A Fighter can even be a wild warrior toting a massive sword, almost like a Barbarian that replaces raging ferocity with deceptive skill. Good or evil, honorable or scheming, Fighters come in all types, and the player can choose whichever they desire.

Just like how evil D&D characters can still be heroes, Fighters can be just as dynamic in personality as any other character class available. In Dungeons & Dragons, the limits of characterization are not tied to the class, but to the player. Like many things in Dungeons & Dragons, it is all up to the player’s imagination, and a Fighter can be just as interesting as any Paladin or Sorcerer.

Fighters in Dungeons & Dragons may be assumed to be a less interesting class than most, but that is only a matter of perspective. The sheer variety available in their build allows the player to make any sort of fighter that they could imagine. The Fighter is on par with every other class in Dungeons & Dragons in terms of being able to create a satisfying adventure, and players wondering what to try next should consider giving one a chance.