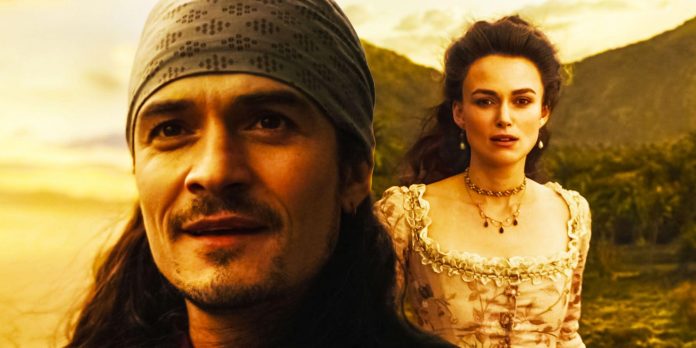 As proven by the fact that Jack Sparrow has barely any love interests despite starring in five movies, the Pirates of the Caribbean antihero only works as a leading man when he has strong support. The first three Pirates of the Caribbean movies wisely cast Kiera Knightley and Orlando Bloom as a pair of star-crossed lovers, Elizabeth and Will, and paired their tragic love story with Depp’s comedic antics to keep the tone of the series from turning into a full-blown comedy. While many fans loved Jack and wanted him front and center, the critical failure of later sequels proved the Pirates of the Caribbean movies needed a romance at their core to keep viewers invested.

Related: Jack Sparrow’s Missing POTC Origin Made Him Even Better (Why It Was Cut)

As such, Pirates of the Caribbean 5: Dead Men Tell No Tales not only acknowledged many fans’ disappointments with Jack Sparrow and his lack of character growth but even promised to bring back Will and Elizabeth for an appearance that would tie up their love story once and for all. The cameo was meant to be brief and poignant but failed in its attempts at moving melodrama since the duo’s story already had a fitting (if tragic) ending. To make matters worse, the actors were barely glimpsed together onscreen, and their previously unseen son had to do much of the subplot’s heavy lifting alone.

The Original POTC Trilogy Gave Will and Liz A Perfect Ending

The sight of Elizabeth waiting for Will’s return was a devastating ending to the original Pirates of the Caribbean trilogy and almost redeemed the plot-holed-ridden action of At World’s End. Dramatic, tragic, and as moving as anything attempted by the franchise before or since, the ending of At World’s End fits the characters even though it was sadder than what most blockbuster fans were accustomed to getting from big-budget franchises. Updating viewers on their relationship fourteen years later in Pirates of the Caribbean 5: Dead Men Tell No Tales sapped this moment of its melodrama and was a waste of time since viewers already knew their fate and the fifth movie left it unchanged until the closing scene.

Henry Turner Was A Poor Replacement

Brendon Thwaites did what he could with the role, but Henry clearly existed only to tie together the unrelated story of Salazar’s revenge and also Will and Elizabeth’s shared fate. The Trident that allowed Will to escape a life as the Flying Dutchman’s eternal captain was an obvious MacGuffin that didn’t even figure into much of the plot of Pirates of the Caribbean 5: Dead Men Tell No Tales, and the revelation that Will was freed from the Dutchman would have been more impactful if this weren’t one of the only times that viewers saw him in the entire movie. While the fifth movie attempted to convince viewers that Will was agonizing over his fate, hearing this from his son rather than the man himself was a poor substitute and the issue was compounded by the brevity of his love interest’s appearance.

Will and Elizabeth’s Cameo Was Too Brief

While Bloom’s role was small (since the complicated story of Pirates of the Caribbean 5: Dead Men Tell No Tales needed to find time for its Barbossa and Carina plot hole), it was better than what the sequel afforded former series star Elizabeth. Knightley didn’t even speak in her momentary appearance, making this the sort of brief cameo that is better off left out of the final cut. Her entire appearance in the fifth movie amounted to a few glances and unspoken embraces, and what might have been a moving reunion instead felt like a contractual obligation thanks to the hurried sequence.

Related: Every Actor Who Can Replace Johnny Depp As Jack Sparrow

Pirates of the Caribbean 5’s Sequel Hook Makes No Sense

After the end credits of Pirates of the Caribbean 5: Dead Men Tell No Tales, it is revealed that Davy Jones is out for revenge on Will and Elizabeth and will soon graduate from haunting their nightmares to attacking their waking lives. This sequel setup was already a tiresome proposition since it is too late for Bill Nighy’s Davy Jones to return, and it felt unlikely even back in 2017 that the next movie in the series would reunite the entire original trilogy cast to revisit the long-finished story. However, in terms of plot mechanics, the cameo also doesn’t add up. How has Davy Jones been alive all this time, and why is he only able to seek revenge on Will and Elizabeth now that Will is freed from his service? For that matter, why should viewers care?

Will and Elizabeth have just spent decades apart, meaning the peace that Davy Jones is intruding on was barely established in the first place. Meanwhile, the fact that Will has left a vacancy for the Dutchman’s captaincy means Jones can presumably regain his lost ship without even bothering the duo. Davy Jones’ love story and its plot holes proved that the villain was always a tough one to make sense of in the context of the series, but the Pirates of the Caribbean antagonist at least had clear goals in the earlier outings. Now, he appears to be working against his interests by eschewing the chance to take back his ship and instead pursuing a long-forgotten vendetta on land. It is a twist that was clearly designed to set up a sequel but fails to establish what the stakes of its conflict would be in the process. With Dead Men Tell No Tales not prompting another Pirates of the Caribbean sequel starring the duo and the long-dead villain, the scene plays out as a non-sequitur desperately trying to connect the sequel to the original trilogy.

For a franchise to move forward in stride, it needs to let go of its past — and the many Pirates of the Caribbean sequel mistakes prove that it’s no exception to this rule. Dead Men Tell No Tales didn’t perform anywhere near as well as its predecessors (except for maybe On Stranger Tides). However, this wasn’t due to new lead characters but a weak narrative and poor handling of the Pirates timeline. One of the issues with Pirates of the Caribbean 5 was that it should’ve been a legacy sequel, passing the baton from Will and Elizabeth to Henry and Carina. However, a good legacy sequel doesn’t lean on the films that came before it; instead, it builds a new and exciting story that adds to the franchise while honoring its roots. Dead Men Tell No Tales missed the mark in a number of ways, and the Will and Elizabeth cameos only reinforced the fact that the movie was making a futile attempt to tie the events of the movie to its now-nonsensical universe.

The Pirates of the Caribbean franchise is continuing with two separate movies. The first adds Margot Robbie to the series in the lead role as she captains an all-female pirate crew. The second Pirates movie is a spinoff of the series, and Jack Sparrow is no longer involved in either given Johnny Depp’s high-profile exit from the role. The tides are turning, and it looks like Bruckheimer and his Pirates crew are making the necessary bold choices for the franchise. For future sequels to continue successfully, however, the new Pirates movies can’t fall into the same trap as Dead Men Tell No Tales. Rather, the spinoff and the Margot Robbie project should differentiate themselves from the original movies by introducing new reasons to care about the Pirates of the Caribbean universe.

Some Apex Legends players Want the rating to be changed to...

Famous Pokemon Scarlet and Violet Leaker hint at the plot of...