Home News Why Does the Sky Look Blue? 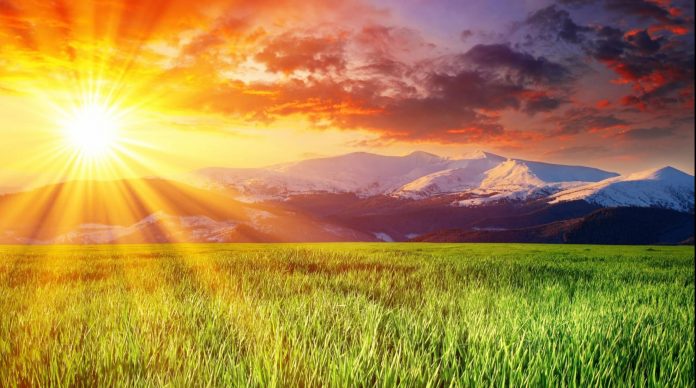 Even though we are accustomed to living creatures on Earth since the day it existed, the appearance of the sky in blue is not a situation encountered in the entire Universe. So why does the sky look blue? Why does it turn a red-orange color everywhere as the sun goes down? Let’s answer these questions in all details.

The world is our home and we have been living here since the day we existed. Like our ancestors, we got used to seeing a blue sky when we turned our head up, and we often didn’t even question it. Let’s think with the naivety of a child and wonder why the sky looks blue. We answer this question according to a study published in Scientific American.

“Why does the sky look blue?” and “Why does it turn a red-orange color everywhere at sunset?” The answer to the question is the same; Sun.

Where it all starts: The Sun

Thanks to the Sun, which is the heat and light source of our world, we can live here with peace of mind. We look up and see the sun yellow-orange, the sky blue, the clouds white, the sea and oceans blue, and as the sun sets, we see red-orange everywhere. Actually, none of these colors exist, only white.

Both the sun and the light from the sun have a white color. However, this white is not like the white we know. Because the white of sunlight hides all the colors we see in the rainbow. In other words, the white color of the Sun hidden in the colors of the rainbow we see in rainy weather are orange, red, yellow, green, blue, dark blue and purple.

Since there is such a wide palette of colors in sunlight, why don’t we see them all the time? Because we need a reflective prism like a raindrop to see. This is why rainbows appear after rain. So why is the sky not blue or very colorful?

Actually all colors were scattering but they gave the first place to blue:

Light begins its journey from the Sun and takes firm steps towards our Earth. But it encounters a space that is not on many planets, the atmosphere.

We can think of sunlight as an electromagnetic wave oscillating up and down. When light passes through the atmosphere, it encounters air molecules. When it encounters particles called electrons and protons in air molecules, scattering occurs and light is scattered everywhere.

During the scattering, the sunlight, which we know as white, separates into the hidden colors of orange, red, yellow, green, blue, dark blue and purple. Each of these color components, dispersed from a single spectrum of light, has a different velocity than the other. As we see every moment we look at the sky, the fastest of these color components is blue.

Why is the sky blue? Because the fastest color is blue:

When sunlight passes through the atmosphere and encounters air molecules, it separates into colors and each color is dispersed on our Earth at a certain speed. Among these colors, blue and purple are the fastest. As the fastest blue and purple, we can list the speed of these colors as follows; blue, green, yellow, orange and finally red.

The blue component of the light spectrum has a shorter wavelength and higher frequency than the others. The acceleration of the charged frequency is proportional to the frequency square; The intensity of the scattered light is directly proportional to the square of the acceleration obtained. If you are not a theoretical physicist, it can be a little tiring to do such a procedure, but we can say that blue is definitely the fastest as a result of the process.

Blue color, thanks to its speed and high frequency, rapidly spreads all over the world without leaving any opportunity for other colors. Therefore, when we look at the sky, we see a dominant blue color. But purple is as fast as blue. So where are the purple and other colors?

The heaviest light wave is red at 750 nanometers, while the fastest light waves are blue and purple at 400 nanometers. In order to visualize these measurements, it is useful to say that the human hair is about 50 thousand nanometers. Where are the other colors?

A light without a mirror, prism or very dense gas molecule continues on its straight path. Sunlight also goes straight, but as soon as it comes into contact with the atmosphere, color components that are not as fast as blue and purple enter our Earth as white, without dispersing.

The reason why the purple color, which scatters with blue and rapidly spreads to the world, is invisible is we, the people. The human eye is not as sensitive to the color purple as it is to the color blue. So we can’t see the purple color, some of which is absorbed by the upper atmosphere, but we know it’s there somewhere. Just like all other colors.

Where do the other colors of our world come from?

Continuing on its way without encountering any effect, the blue reflects from the seas and oceans and makes these places look blue. The light, which cannot scatter due to the dense water molecule in the clouds, continues to remain white as it came. Since the sunlight coming from the horizon line is exposed to much more air, even its blue diffuses and turns white. Therefore, the vanishing point is whiter.

So why does the whole place turn into a red-orange, romantic color as the sun sets? People who add the phenomenon of romance to these colors, of course. The reason for the red-orange color is sunlight that is not sufficiently dispersed. As the sun sets, the light does not diffuse much in the atmosphere, so the red color reaches us. However, as the blue color dissipates rapidly, it becomes invisible at that moment.

Sorry if the sunsets offer a magnificent view where you live, your air is pretty dirty. Because the aerosol sulphate, organic carbon or mineral dust particles in the polluted air accelerate the distribution of the blue color component. Since the blue color dissipates rapidly, the Sun looks even more red. This must be what they say that everything has a price.

The answer to the question of why the sky looks blue is the Sun, which not only gives life but also makes life more beautiful by giving colors. If we don’t take good care of our world and continue to damage the atmosphere, it’s hard to imagine what color future generations will see in the sky.