Home Entertainment Why does Castle in the Sky have two official soundtracks? 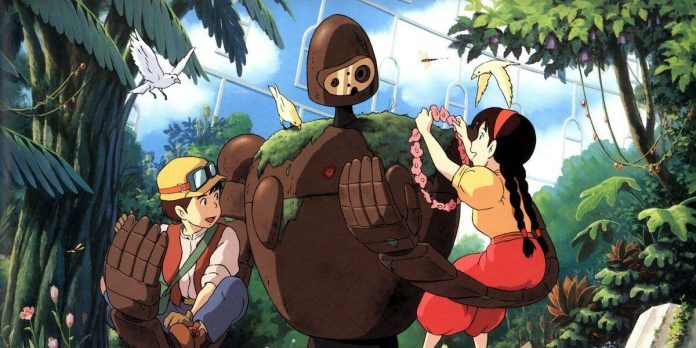 Most of Hayao Miyazaki’s great films are based on the soundtrack by Joe Hisaishi. Hisaishi has been Miyazaki’s favorite composer since he wrote the music for “Nausicaa: Valley of the Winds”. Since then, he has created some of the most memorable Studio Ghibli compositions in the company’s history. His next score will be “Laputa: Heavenly Castle” by Miyazaki, and many Ghibli fans consider this music to be one of the composer’s most memorable compositions.

However, Laputa: Castle in the Sky has a unique difference from most of Hisaishi’s other soundtracks: there are TWO different versions! Moreover, this is not a situation where America has its own score, and Japan has the original. No, in this case, Joe Hisaishi composed BOTH scores, and both can be considered “official”. The story of why he did it is interesting, funny and, in the end, a little disappointing when all is said and done. This includes big plans, a desire to improve what was before, and a company that cooled down to the project at the last moment.

Disney has set its sights on “Laputa: The Heavenly Castle”

In 1996, Studio Ghibli made an unexpected deal with the Walt Disney Company: they sold the rights to distribute their entire catalog in America to Disney, which continued to produce English dubs of films and release them in America. Anime fandoms were concerned that Disney would not respect the source material, but they had nothing to worry about; one of the conditions was that Disney would not cut the films or make any changes to them. With the exception of the dubbing itself, they will remain intact.

It seems that small changes to the music were not part of the original agreement. The first movie released by Disney was Kiki’s Delivery Service, which was released straight to video on September 1, 1998. Disney was true to his word and didn’t cut anything, but they improvised some dialogue to fill the silence. with additional music by Hisaishi and replaced the Japanese music with two American songs by Sydney Forest. The video instantly became a hit and suddenly became a bestseller. Famous film critics Gene Siskel and Roger Ebert even reviewed the film in their show (where they gave it “Two Thumbs Up”). Also on this cassette will be advertised the next release of Ghibli: Castle in the Sky.

Disney has big plans for “Castle in the Sky”

Disney decided that “Castle in the Sky” (excluding “Laputa” from the title, since it was an offensive word in Spanish) would be the next release of Studio Ghibli. However, when Kiki’s delivery service surpassed video sales, the executives paused and took another look at Castle in the Sky. They started to wonder if maybe they were a little hasty. Maybe—just maybe—”Castle in the Sky” could be a hit at the box office. It had all the ingredients to be a huge hit, from memorable characters, great action and most likely it would match the PG rating. However, the executives had one problem with the film: the music. While the executives thought the melodies themselves were good, unlike other Ghibli films, the music for this film was made using a synthesizer.

While it was common for films of that time to use synthesizers to sound films (sometimes with great effect; take a look at the Oscar-winning soundtrack to Chariots of Fire), it was the nineties, and films today were dubbed by luxurious orchestras.

They couldn’t release a product that sounded like it came from the eighties (although in fact it was), so Disney went to Joe Hisaishi and asked him to re-record music for a modern audience. They wanted the music to be recorded with an orchestra, new pieces to fill the silence at least a little, and they spared no money.

Excited about the opportunity to return to one of his first major works, Hisaishi agreed, and a new score was written. When it was delivered, Disney was pleased with the end result. The problem was that at the time they asked him to re-record the score when it was finally delivered, the plans for the release of Castle in the Sky changed.

Castle in the sky postponed

During the dubbing process, a small film called “Princess Mononoke” hit Japanese cinemas, and Disney decided to change course and release it as their first theatrical release of Ghibli. This decision would have been a disaster that the company could not fully survive, but it happened, and it meant that Castle in the Sky was postponed. When Princess Mononoke flopped, it prompted Disney to shelve the entire catalog until John Lasseter showed up and convinced them to release the rest of the titles on DVD. This included Castle in the Sky on April 15, 2003.