Home Entertainment Why do RHOBH fans Think Kyle Exploited Her Sister Kim at the... 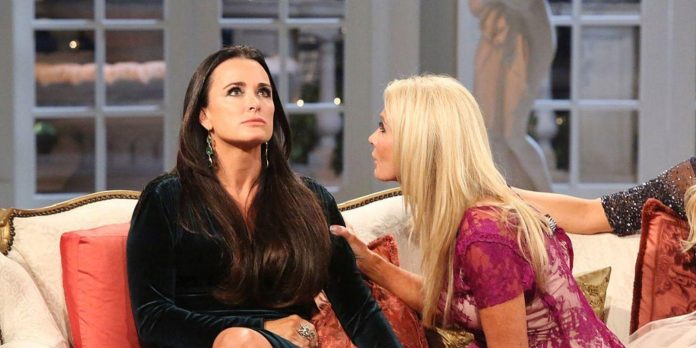 Kyle and Kim Richards had a tumultuous relationship when they starred in The Real Housewives of Beverly Hills, and despite the years that have passed, fans are still talking about Kyle’s early exploitation of her sister. Kyle and Kim, who were actresses as children, joined the first season of RHOBH in 2010 along with Adrienne Malouf, Camille Grammer, Taylor Armstrong and Lisa Vanderpump. As the sixth installment of The Real Housewives, RHOBH followed the professional and personal lives of these housewives as they traveled the Beverly Hills scene.

While many women in RHOBH have had their share of conflicts, Kim and Kyle have been one of the most authentic (and dramatic) duos throughout the series. For example, in the finale of the first season, Kim and Kyle had an infamous argument about a limo, as a result of which Kyle talked about Kim’s struggle with alcoholism. From that moment on, Kim felt many times that Kyle was not supporting her. Again, during the iconic Amsterdam fight in the fifth season of RHOBH, Kim berated Kyle along with the rest of the table and accused her of not acting like a “real sister.” While Kyle has defended herself over the years, viewers quickly sided with Kim.

Related: What was the first season of the TV series “The Real Housewives of Beverly Hills” remembered for

Fans on Reddit recently discussed Kim and Kyle’s relationship from the beginning and concluded that Kyle was exploiting Kim’s personal issues on RHOBH. “It struck me that [Kyle] exposed Kim as an alcoholic at the end of the first season, and then continued to force her to go to places that could provoke her drinking,” one person wrote, referring to the winery that the women visited during the second season of RHOBH the day before. what became a disastrous game night at Dana Wilkie’s house. Other users mentioned how Kyle and Mauricio treated Kim during the actors’ trip to Hawaii in the second season. One fan commented, “At the dinner [Kyle and Mauricio] clearly knew something was wrong with Kim, but the way [they] constantly questioned Kim was unnecessary and belittling.” Kyle was “ruthless in her contempt for Kim,” summed up another Redditor.

While fans continued to criticize Kyle for the way she treated Kim at the beginning of the RHOBH season, despite the fact that the show is now in its 12th season, Redditors have not forgotten the other former actors that the 53-year-old woman also mistreated. While most fans on the internet dispute the claim that Kyle “stole Kim’s fucking house,” they agree that Kyle was wrong because of the way she treated Brandi Glanville and Camille Grammer on RHOBH. One person asked how Kyle stayed on the show for so long. Fans claimed that Kyle often behaved as if she was “jealous of Brandy,” and made fun of Yolanda Hadid’s Lyme disease with Lisa Rinna, whom Lisa accused of being fake. Another person said that Kyle “feels the need to expose everyone who is in the spotlight,” and cited Kim, Brandi, Camilla, LVP and Denise Richards as examples.

Although viewers have continued to talk about Kyle and Kim’s relationship despite the years that have passed, it is Kyle’s recent behavior in the 12th season of RHOBH that is currently putting OG in hot water. Between laughing at Erica Jane screaming at Garcel Beauvais’ son and doubting Sutton Strack’s two miscarriages, Kyle has spent the last few weeks defending herself from angry viewers. While Kyle is the latest original RHOBH star on Bravo, some fans are hoping she’ll get a cleat ahead of Season 13 more than ever.