Home Entertainment Why do RHOBH fans Think Diana Joined the show to Save Her... 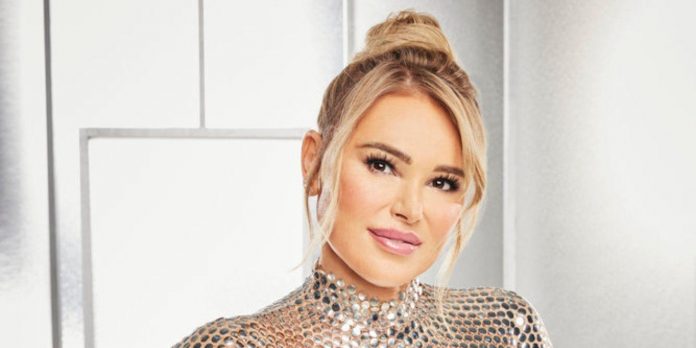 Diane Jenkins debuted in season 12 of The Real Housewives of Beverly Hills, and fans are wondering why she joined the cast. The new RHOBH star is by far the richest housewife in the franchise with a fortune of $300 million. Growing up in war-torn Bosnia, Diana fled to Croatia during the war, and a year later moved to London, where she eventually met her first husband, financier Roger Jenkins. Diana and Roger divorced after ten years of marriage, and she became independent when she received $150 million in compensation.

After the divorce, Diana was busy with her numerous companies and charitable activities. The entrepreneur launched her beverage company Neuro Brands in 2009 and co-founded D Empire Entertainment with her fiance Asher Monroe. Diana also created the coffee table book Room 23, which features intimate photos of celebrities such as George Clooney and Cindy Crawford. Room 23 caused controversy when rumors spread that the book was actually a list of high-class prostitutes for wealthy clients with Diana as madam.

In a recent episode of RHOBH, room 23 was brought up, but Diana quickly cut the conversation short. Viewers believed that Diana was uncomfortable talking about the book because of the negative rumors surrounding her. Some fans believe that Diana joined RHOBH to save her reputation. Reddit user crumb11 asked: “Does anyone really believe Diana? I’m not trying to argue, I’m just really confused because everything she says doesn’t make sense or doesn’t add up at all.” Others wondered why Diana joined the show when she didn’t need the money. The original Redditor asked, “Is she that rich if she’s on the show? That’s my question.” Then New-Ferret5920 replied: “Fame and/or [an attempt] to clear her name from the scandal with her book. Katie Hilton joined us for the same reason.”

Diana’s presence on RHOBH is very controversial. She spoke about her difficult life growing up in Bosnia and the fact that she had to leave her family. RHOBH fans were interested to learn about her life, but Diana soon became unattractive due to her comments that she does not shop in stores and only designers send her clothes. Diana, too, was initially uncomfortable talking about her book with other women, and later she explained that she did not like to brag about her achievements. However, during the birthday party of RHOBH star Garcel Beauvais, Diana gave her Room 23, and later shared in a confession that the book was very difficult to get because it was released in a limited edition.

RHOBH fans don’t find Diana a great addition to the cast yet. With many storylines surrounding Dorit Kemsley, Erica Jane and Lisa Rinna, Diana gives nothing but bragging about how rich she is. Many viewers believe that Diana also starts a drama with Sutton Strake and Garcel in vain. If Diana joined RHOBH to save her reputation, she may have to behave more modestly and reduce her role as a “villain”.