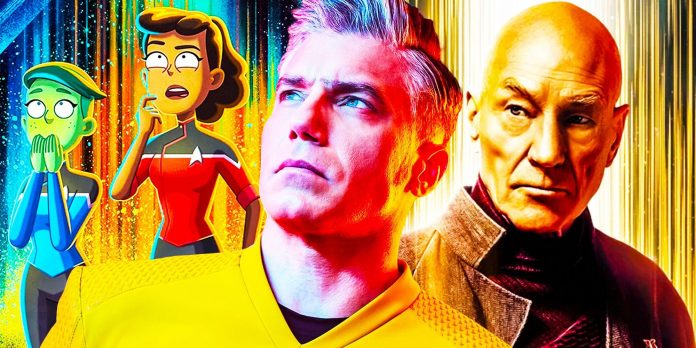 Modern Star Trek has become strangely divisive – which factors made it so? Charting a course across screens big and small, Gene Roddenberry’s Star Trek endured where so many others sank, but at no point has the good ship Star Trek been invulnerable. Star Trek: The Original Series season 3 and Star Trek: The Next Generation season 1 both weathered stormy seas, there’s a whole legend about odd-numbered movies being cursed, and Enterprise landed to widespread indifference.

2013’s Star Trek Into Darkness was arguably the first example of modern Star Trek division. Despite strong reviews and a predecessor that successfully reignited mainstream fortunes, Star Trek Into Darkness is frequently voted among the franchise’s very worst cinematic endeavors by fan polls. That same spirit has permeated over to TV, with Star Trek: Discovery, Star Trek: Picard and Star Trek: Lower Decks all coming under fire. Only Star Trek: Strange New Worlds evaded the cruel sting of audience ire.

The division of modern Star Trek can be partly attributed to a far wider culture chasm. Right-wing press amusingly accused Star Trek: Strange New Worlds of going political, and as the franchise makes efforts to increase cast diversity and representation, a vocal minority will always seek to devalue progress by crying “wokeness.” It’s also true that social media has amplified toxicity within fandoms across the board. One need only look toward Moses Ingram’s Star Wars backlash, The Rings of Power comment sections, or Snyder cut hashtags to see how quickly fires can catch. For Star Trek specifically, however, why have modern TV shows proven so divisive?

Addressing Star Trek: Discovery backlash at SDCC 2022, Sonequa Martin-Green struck upon a crucial truth, underlining the biggest factor behind modern Trek criticism. The Michael Burnham actress graciously conceded, “Let’s be real… We are very different than other iterations, and we had to find ourselves. We had to find our identity and settle into it.”

From Star Trek: The Original Series through to Enterprise, the core of Star Trek remained largely untouched. The franchise evolved, deviated and updated, but even when quality went AWOL, Star Trek felt like Star Trek. The launch of Star Trek: Discovery in 2017 verged upon a wholesale reinvention. Tonally darker and deliberately more mature, Star Trek: Discovery drops the franchise’s swashbuckling, accentuates the interpersonal drama, and replaces weekly episodic adventures with long-form serialized storytelling. Star Trek: Picard deviates even further from Uncle Gene’s original recipe, doubling down on the serialized structure and heavier tone, while Star Trek: Lower Decks heads in the opposite direction by channeling outright comedy for a totally alien experience.

Modern Star Trek TV shows redefine what the “Star Trek” label means, and that unfamiliarity breeds contempt. The overwhelmingly positive reaction to Strange New Worlds is the exception to prove that rule, as Pike’s Enterprise strikes a happier light-dark blend and heralds a return to the episodic days of yore.

The problem, as Sonequa Martin-Green eloquently describes, is that Star Trek: Discovery finding its own niche isn’t inherently negative. Heading into season 5, the Disco gang command a loyal following comprised of preexisting fans who enjoy Star Trek: Discovery on its own merits, and newcomers who maybe didn’t enter with any strong preconception of what Star Trek should be. Serialized formatting has, at the very least, allowed Star Trek: Discovery to avoid feeling derivative, and the tonal switch has meant stories covering mental health, grief, and family can be told with depth and nuance. Boldly going where Star Trek hasn’t gone before isn’t always a bad thing.

Changes to established canon are sacrosanct for any movie or TV franchise, but with over half a century of lore to consider, modern Star Trek poses an especially tricky continuity nightmare. Star Trek: Lower Decks can be excluded by virtue of its madcap comedy stylings, but Star Trek: Discovery and Star Trek: Picard have both played fast-and-loose with fictional history.

Star Trek: Discovery’s biggest bug-bear is the Klingon Empire, as the veteran baddies undertook a physical and cultural makeover that went down about as well as a tribble’s furball. Not only were Star Trek: Discovery’s Klingons virtually unrecognizable from their predecessors (should that be descendants?) but the species’ entire aesthetic was altered and their culture morphed into a hyper-religious cult movement. Star Trek: Discovery made efforts to explain these changes, but more canon wrinkles kept arising – the Federation war, Spock’s secret sibling, knowing what the Gorn look like, etc. Eventually, Star Trek: Discovery took the wise decision to relocate itself 900 years into the future where canon eggshells aren’t as easily stepped on, and seasons 3 & 4 are vastly improved as a result.

Star Trek: Picard finds itself tripping into similar pitfalls. Jean-Luc’s bleak season 1 characterization feels far removed from his traditional persona, the Federation is almost dystopian, and Star Trek’s traditionally optimistic ideals have been replaced by hopelessness. Star Trek: Picard season 2 then shuffles the franchise timeline with regards to World War III and the Eugenics Wars, and does its damnedest to forget Jean-Luc Picard had a brother (despite making passing mention of poor Robert).

Most viewers – even the unhappy ones – can appreciate how adhering to almost 60 years of canon isn’t feasible, and even the beloved Strange New Worlds has fiddled continuity when convenient. When a TV series like Star Trek: Discovery rolls along promising to completely redefine the brand, however, obvious (sometimes pointless) canon changes like giving the Klingon race an all-over wax only deepen the disconnect between past and present. Audiences can quickly feel like the fictional universe they’re already invested in no longer matters.

Is The Star Trek Backlash Really Worse… Or Just Louder?

One quick glance at internet discourse and you’d be forgiven for assuming Star Trek: Discovery, Star Trek: Picard and Star Trek: Lower Decks are a three-way affront to good taste – a corporate conveyor belt of content to keep Paramount+ afloat with no regard for quality or respect for history. Given how almost everything pre-Enterprise is discussed with reverence, you’d also be forgiven for believing backlash to modern Star Trek TV shows is a new phenomenon…

Here in 2022, declaring Star Trek: The Next Generation the best Star Trek TV series is not an especially controversial opinion, but when Jean-Luc Picard’s crew first set sail in 1987, audiences were singing a very different tune. Viewers compared this bold newcomer unfavorably against Star Trek: The Original Series, critiqued the new cast, and were generally skeptical of the franchise’s expansion. Only in Star Trek: The Next Generation season 3 did winds start blowing in the Enterprise-D’s direction. Deep Space Nine was shunned initially too, dismissed as unnecessarily dark and not “in the spirit” of Star Trek – eerily similar criticisms to those aimed at Star Trek: Discovery. And until Alex Kurtzman took the reins, Star Trek: Voyager was the TV series everyone loved to hate, before those opinions gradually softened over time.

If modern Star Trek feels more divisive, that’s because of the medium through which those opinions are given. Criticisms of Star Trek: The Next Generation, Deep Space Nine and Star Trek: Voyager were limited to the slow grind of print media, strongly-worded letters, and early dial-up internet. You really need to hate a TV show to wait until your mother finishes her landline phone call before typing out a blog that takes 3 hours to upload. Somewhat ironically, technological advancements have been to Star Trek’s detriment. Every single viewer can now share their immediate reactions with a few thumb swipes, and the nature of social media promotes stronger, partisan viewpoints over balance, creating an echo chamber that amplifies negativity. Star Trek has undoubtedly changed its style over the past decade; the modern Star Trek backlash, however, isn’t fundamentally much different to 30 years ago.

Xbox Game Pass Loses 4 Games At the End of the...