Home Entertainment Why didn’t Black Lagoon have another season? 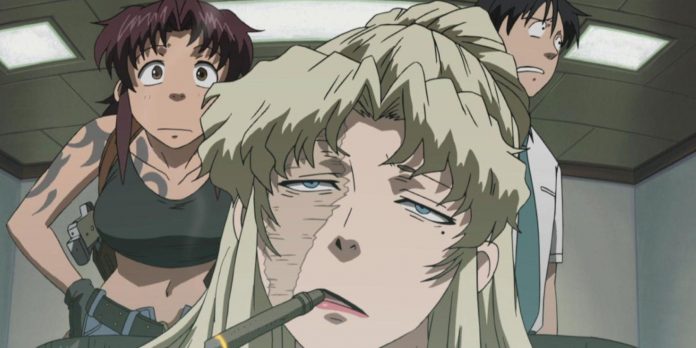 Black Lagoon is one of those mid-2000s anime that further defined Madhouse as a producer of darker typically uber-masculine anime for mature audiences. With its popularity in the west, it’s surprising that this anime hasn’t continued since 2011 despite the manga still running. Black Lagoon started as a manga in 2002 written and illustrated by Rei Hiroe and serialized in Sunday Gene-X. In 2006, Madhouse produced two 12-episode cours called Black Lagoon and Black Lagoon: The Second Barrage, before releasing a five-episode OVA starting in 2010 called Roberta’s Blood Trail.

The series tells the tale of Rokuro “Rock” Okajima, a Japanese businessman who ends up working for the Lagoon Trading Co. when his company cuts him loose when he gets held for ransom. Living in the city of Roanapur in Thailand, Rock has to do his best to survive in one of the most dangerous and insane places on earth. The two seasons and the OVA were met with much acclaim, but it all seemed to end after the OVA.

RELATED: The Best Action Anime To Watch If You Love Lycoris Recoil

To understand why anime tend to end before its source material, there are a few go-to reasons that tend to offer an explanation. In the case of Black Lagoon, it’s hard to say for certain why Madhouse didn’t continue the series as no official statement has been given, but some reasons make more sense than others.

For some anime, they might end because of poor critical reception or low sales in Japan. As to the former, the reception, at least in the west has been universally positive over the years, and as for the latter, there isn’t much readily available data to support the idea that it wasn’t selling well. As it is, the animation never seemed to suffer from any budget restraints, were there any at all.

A good deal of anime of that time might have decided to create filler content, a route Madhouse decided to forgo. Fans of both the manga and the anime have said that the show was very accurate to the source material, only citing minor differences in the order of events and the resolution to the OVA’s arc. The first two seasons in 2006 adapted only stories that were finished by that point.

The arc “El Biale de la Muerte” – all 33 parts of it – served as the basis for the Roberta’s Blood Trail OVA and had only been released in a collected volume in October 2009, one year before the OVA. It was the longest and most intense arc yet, hence why after such a hiatus, Madhouse must have jumped at the chance to adapt it. But it wouldn’t be until 2018 that the next arc would be released fully in volumes 10 and 11.

While most associate Black Lagoon with its anime, the manga not only continued but is technically still going. The reason that its release schedule has been so sporadic has been that its mangaka, Hiroe, has battled depression for a long time. It’s unfortunate, but many artists in the manga world deal with mental and physical issues that can be intensified by such a demanding craft

There really couldn’t have been another Black Lagoon until perhaps 2018 or later, and in that time, the animation industry has shifted. The studio landscape is different, the dominant styles have changed, and the production pipeline has changed for both the better and worse.

Madhouse historically has had a very strong brand and a keen eye for what kinds of projects would best fit that brand. There have been exceptions to that image, but the “idea” of Madhouse stayed strong for a very long time. That is until recent years when the studio has begun to shift to a new direction with a renewed yet hard-to-place identity.

In a video by The Canipa Effect on YouTube, a highly educational essayist covering the anime industry, he covers the studio’s “silent fall” and how many of the founders and staff departed to work elsewhere. While it wouldn’t be impossible for Black Lagoon to be made today, it might not be the kind of project today’s Madhouse could produce. It’s hard to say what studio would be up to the task.

Was The Anime’s Ending Enough?

Consider for a moment – no matter how disheartening – the idea that Black Lagoon won’t continue. Was the ending that audiences received satisfying? Admittedly, it was quite compelling, as, after the depressing end to the second season, Rock’s character arc took a big leap forward, pulling them deeper into the abyss.

Roberta’s Blood Trail saw two major stories come into play: Roberta’s titular quest for vengeance, and Rock trying to piece together all the competing parties and agendas and outsmart everyone. It was a much darker story that seemed to show significant growth in his character, but not necessarily positive growth.

Few would disagree that Black Lagoon was a well-told, exciting, and compelling story, but it also isn’t the most satisfying in the end. It wasn’t as though much was changed, and though that could arguably have been the lesson, it felt like there was more to unravel there. With the manga having continued so long afterward, maybe there is a better place to end it all, but if not, Black Lagoon was still a hell of a ride.