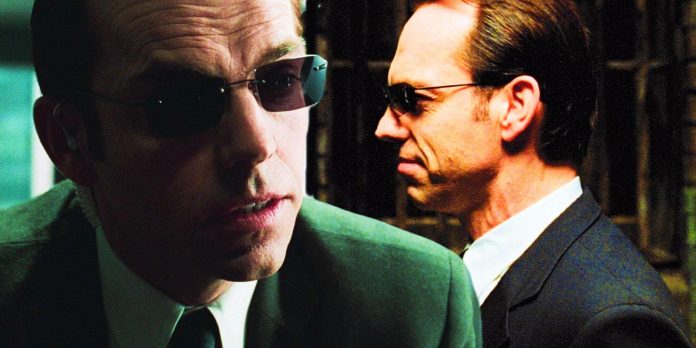 Agent Smith from The Matrix is one of the most prominent villains in pop culture, and this is largely due to the fact that the character has his own plans, and not what the machines actually want. At first, it seemed that Agent Smith, like all other agents in the Matrix simulation, was a one-dimensional villain whose sole purpose was to counter Trinity, Neo and Morpheus. However, Hugo Weaving quickly began to give Smith features of a much more complex personality, which eventually paid off when Smith betrayed the other agents and the machines themselves.

In the story of the escape from a psychiatric prison, in which everything seemed “normal”, the Agents could not have been better thought of. While each member of the crew of the Nebuchadnezzar had his own style and appearance, all agents wear the same clothes — a suit and tie. Theoretically, Agents in the Matrix should not have a sense of individuality, which is symbolized by the fact that they can instantly accept the bodies of any other person inside the simulation. The agents rarely talked, which was very different from Agent Smith’s behavior.

Related: Explanation of Each Animatrix Short Film: Matrix Connections and Are they Canonical?

Near the end of The Matrix, when Morpheus has been captured, Agent Smith takes off his earpiece to have a sincere conversation with the leader of the people. Smith and the agents tried to get Zion’s protection codes from Morpheus, but the reason Smith wanted the mission to succeed was not just to follow orders. Agent Smith hated the Matrix, which in itself was contrary to the nature of the program, and he wanted to leave no matter what. For Smith, people were a virus, something disgusting, and the Matrix was a prison from which Smith had to escape. Smith suggested that once they destroyed Zion, the Matrix would have no reason to exist, and thus all programs would return to the Source. Smith’s mission itself was no different from that of other Agents, but he could not let others know that he had formed his own opinion about the Matrix and the relationship between humans and machines.

Explanation of Agent Smith’s plans in the Matrix Trilogy

Smith was already a subversive program in The Matrix, but his self-awareness became even stronger after Neo apparently destroyed him at the end of their fight. In fact, Neo did not destroy Smith completely, but rather indirectly helped the program escape from the source. Neo was the Chosen One, and his brief acquaintance with Smith at the end of the Matrix was enough to make the Agent much stronger and smarter. When viewers see Smith again in The Matrix: Reboot, Hugo Weaving’s character no longer has an earpiece, and even his glasses are slightly different from the other agents. From that moment on, Smith became the third party in the war — he fought not for cars and not for people, but rather for himself. Smith was becoming as strong as the Chosen One, and in the Matrix Revolutions, he posed a threat to both Zion and the City of Machines, as he found a way to leave the Matrix simulation.

The conflict between Agent Smith and Neo, the two sides of the Chosen One’s prophecy, was as interesting as the battle between humans and machines, if not more. Hugo Weaving played Smith as a charming and irresistible villain who outshines himself every time he appears on the screen. Looking back, Smith played every possible role in the war—an agent, a liberated program, and most recently, an ally of Neo and Trinity in Matrix Resurrections.