Home Netflix Why did “Enola Holmes 2” become a nightmare for the actress of... 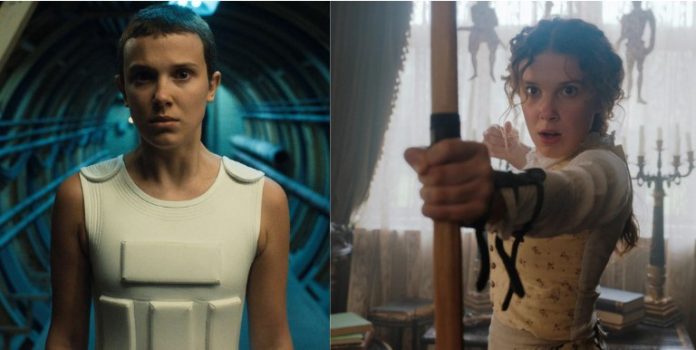 Millie Bobby Brown is quite often called an acting prodigy, and we say that this is well deserved. Mastering such a complex character as Eleven of “Stranger Things” at such a young age is not an easy task. The eighteen-year-old British actress entered the film industry with the continuation of the famous Godzilla vs. Kong franchise. But it was her role as Sherlock Holmes’ street sister, Enola Holmes, that cemented her position as a rising star in the film industry.

Like Brown’s off-screen personality, both characters are incredibly strong and ferocious. When the Duffer brothers cast her for the role of Eleven, they were amazed at the exceptional complexity she could show, and her co-star Enola Holmes, Henry Cavill, also praised her. And although both roles brought her huge fame, the actress was worried about the Netflix movie.

Millie Bobby Brown told about her nightmare from “Enola Holmes 2”

Enola Holmes and “Stranger Things” are synonymous with Millie Bobby Brown. The actress had to star in the final season of “stranger things” immediately after Enola Homes 2. The second part of the detective film will tell about the younger Holmes in another adventure; this one is more exciting than the previous one. Besides the adventures and the wonderful cast, another intriguing aspect of the film is that Enola tells her own story. The sequence consists of a character breaking the fourth wall.

While creating a beautiful performance was a piece of cake, the actress was afraid that she would transfer one of her character’s habits to the set of “Stranger Things.” During the promotions, Millie Bobby Brown said that Enola Holmes 2 instilled in her a “deep-rooted fear.”

The British actress was afraid that she would never be able to tear herself away from the camera. “During the filming, I had a dream that I was on the set of Stranger Things. And I couldn’t stop looking at the camera,” Brown said, according to Today.

These two characters don’t have much in common. While Enola likes to give her two cents for everything, Eleven is not very talkative, and even when she talks, she never looks directly into the camera while doing so. Given her flawless performance in past seasons, we are confident that this will not be a problem.

What do you think about Brown’s fear? Do you think there was any confusion between the two characters? Let us know in the comments below. Meanwhile, check her out in Enola Holmes 2 on Netflix when it comes out tomorrow.

When “Scooby-Doo” and “Scooby-Doo 2” head to Netflix, James Gunn Is...