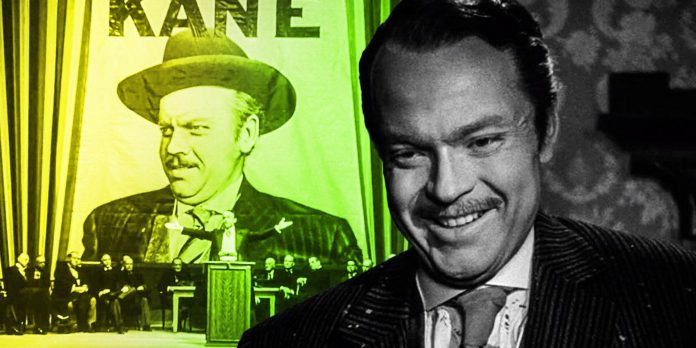 Citizen Kane is often touted as the “greatest movie ever made,” but what exactly makes the Orson Welles movie more deserving of this impressive accolade than, for example, Paddington 2? The family film Paddington 2 recently replaced Citizen Kane as the top-rated movie of all time on Rotten Tomatoes, prompting commentators across the internet to debate what (if any) movie deserves to be referred to as “the greatest” in the history of the medium.

The question of which movie is the greatest ever made is a tricky proposition that has to balance numerous elements ranging from the movie’s aesthetic achievements, the enduring influence the title boasts, and the appeal it holds outside of pure technical mastery. The Godfather and the Stephen King adaptation of The Shawshank Redemption are both often listed among the best movies ever made, with the former having an outsized stylistic influence on the cinema of following decades, and the latter having an enduringly popular, emotionally resonant story.

Related: Is The Shawshank Redemption Based On A True Story?

However, one movie title is listed as the greatest movie of all time more than any other, often to the consternation of people who cannot work out what the title’s hype is about. Released in 1941, Citizen Kane is the directorial debut of director/co-writer/producer/star Orson Welles, who plays the eponymous tycoon (a thinly-veiled satire of numerous real-life American business magnates). Beginning after his lonely death, Welles’ iconic movie tells the story of Kane’s life via the perspectives of former friends, ex-lovers, and embittered associates, coming tantalizingly close to making sense of the man but never offering a clear judgment of the flawed figure. Welles’ directorial debut is frequently listed as the greatest movie of all time, but what makes the movie so “perfect” according to many cineastes — and is the claim true?

Beginning with a newsreel that explains the antihero’s entire life in detail, Citizen Kane seems to deflate any traditional tension by telling audiences the whole story in the opening scene. The technique is borrowed from Shakespeare’s plays, and would have immediately upended audience expectations of the time, as movies until this point had typically followed a straight timeline from the opening scene to the climactic finale. In contrast, Citizen Kane’s story then bounces between different narrators as a reporter pieces together Kane’s internal life, and the subjective perspectives mingle to eventually show that no individual retelling can encapsulate a person’s life and its impact. By the famous Citizen Kane ending, the audience doesn’t understand the villain/hero, but the movie makes it clear that they never could have, and the story ends without a tidy conclusion – a twist that was unheard of at the time but has been used often since.

Released at a time when movies used the camera as an objective observer, Citizen Kane introduced the unreliable narrator into cinema by jumping between overlapping and contradictory accounts of Kane’s life. This means viewers end up with no clear story of the man, and is a technique that filmmakers even now shy away from (even David Fincher’s recent Mank gave a more didactic, clear-cut depiction of Welles himself than Welles did of Kane). The introduction of subjective perspective into cinema was transformative as movie characters became more morally complex, following the example of Welles’ movie which made the eponymous magnate both monstrously callous and, in the heartbreaking reveal of what “Rosebud” refers to, a deeply human figure. While the Rosebud resolution has become so well-known it’s used as a reference point for spoiled twists in movies, it’s telling that the impact of the reveal scene isn’t tarnished one bit.

Citizen Kane Stole From The Best

Many of the editing techniques employed by future The Haunting director Robert Wise and Gregg Toland’s seminal deep focus cinematography had, by the time of Citizen Kane’s production, already been pioneered by German Expressionist movies, D.W Griffith, and George Melies. However, the film Citizen Kane was the earliest mainstream movie to combine this diverse panoply of borrowed techniques in service of an accessible story, melding together disparate styles to form a cohesive — but at the time, incredibly innovative — whole.

Related: Why The Godfather Is Still The King Of Gangster Movies After 50 Years

At one point in the action of Citizen Kane, the title character’s sixteen-year-long failed marriage is condensed into a two-minute montage of increasingly bad breakfasts. It is one of the many moments where Welles’ ambitious filmmaking allowed future directors to collapse long, complex stories into a string of easily understood images, a technique that has become so commonplace it barely merits notice in the twenty-first century. Without Kane’s two-minute marriage, viewers may never have seen Up’s heartbreaking opening scene or the unforgettable montage sequences of 2001: A Space Odyssey. When a director’s work influences a master like Kubrick, it’s definitely a top-shelf achievement.

What Is Citizen Kane About And Why Is It Still Relevant?

Ultimately a tale of a man who values riches and power over all else and squanders his life as a result, Citizen Kane’s story has influenced countless classics that have come since. The plot functions as a brutal condemnation of real-life mogul Charles Randolph Hearst (who attempted a blackmail plot to stop Welles from making the movie), a pointed critique of the rise of fascism in America and Europe, and a compelling human drama at once. This strong archetypical story of a tragic antihero ensures that the movie’s experimental technical aspects never draw audiences away from its central plot, and the range of perspectives that the tale is told from means Welles manages to make audiences sympathize with an unlikeable protagonist. Hearst, Citizen Kane’s inspiration, was ruthless enough to try ruining the director’s life and reputation before the movie was even released. In that respect, it set the stage for future sympathetic villain protagonists like Walter White, Dexter Morgan, and Tony Soprano.

Why Citizen Kane Is (Arguably) The Greatest Movie Ever Made

Much of what makes it hard to argue against Citizen Kane’s impressive claim is the fact that any later movie contending for the title of “greatest movie ever made” will inevitably have borrowed liberally from techniques established by Welles’ film. Welles himself admitted that many of his technical innovations came from his own lack of experience, meaning he had no idea what rules he was breaking. The director’s inventive approach (as well as the peerless work of his collaborators) made the most of inexperience, permanently altering the visual grammar of cinema in the process. It is easy to name movies more visually impressive or moving, funnier, sadder, or more diverse than the film Citizen Kane. However, almost all of the movies that could contend for the title of the greatest movie ever made are built upon the techniques and innovations featured in Welles’ landmark release, whether they borrow deep-focus photography, Eisenstein-inspired montage editing, or disordered storytelling from Citizen Kane.

Welles’ debut defined the cinematic language of a century to the extent that every other greatest movie ever made works from the blueprint that Kane’s editing, storytelling, and visual style provided. It’s even left a lasting mark on pop culture, being referenced and parodied countless times by movies and TV shows since, including The Simpsons, which at one point turned Mr. Burns into its own equivalent of Charles Foster Kane. For many critics and film fans, Citizen Kane can lay claim to the title of the greatest movie ever made precisely because, even if only in the form of in-camera effects and a wealthy, lonely anti-villain, Welles’ movie even influenced the direction of Rotten Tomatoes’ highest-rated movie, 2017’s Paddington 2.

Related: Pontypool: How War Of The Worlds & Orson Welles Inspired The Zombie Movie

How to Watch Citizen Kane Online

While Citizen Kane is still often regarded as being the greatest movie ever made, being a movie from 1941, there are still many people, especially younger generations, who’ve yet to see it despite having reaped the benefits of the many films for which it paved the way. Right now, the most convenient way to rectify that online is via a subscription, since Citizen Kane is one of the best movies to stream on HBO Max as a Warner Bros.-owned film. For those wanting to avoid a subscription, Citizen Kane can also be rented from all major digital retailers for $3.99 and bought from most for $14.99. Amazon currently sells it for only $9.99 as well, in HD quality. For those who still prefer physical media, there’s an excellent anniversary edition Blu-Ray available that’s absolutely packed with extras, including the feature-length Battle Over Citizen Kane documentary.

The Most Influential Film Of All Time? What Movies Did Citizen Kane Influence?

Along with being called the greatest film of all time, Citizen Kane is also regarded as one of the most influential. Citizen Kane is responsible for influencing cinematography in many major ways, and the marriage of Citizen Kane’s clearer definition with increased depth of field became a hallmark of 1940s cinema. This type of cinematography influenced John Huston’s The Maltese Falcon, which made ample use of the low angles and long takes for which Citizen Kane was known. The cinematography and lighting of Citizen Kane also played a significant role in the film noir movement of the 1940s and 50s. The deep focus that defined the visual pallet of Welles’ prolific film can be seen in plenty of film noir movies like The Killers and This Gun for Hire.

The structure of Citizen Kane also had a huge impact on cinematic storytelling. The flashback structure of the movie introduced a range of new elements to the film noir movement. In addition, the structure of Citizen Kane affected major motion pictures of the time, like Lawrence of Arabia and Mishima: A Life in Four Chapters. The impact of the movie’s structural choices lasted long into the 1980s, directly inspiring works like Reds by Warren Beatty. While the general approach to structure and cinematography started changing in the 1960s off the back of the French New Wave movement, the legacy of Citizen Kane can still be seen afterward in seminal films like Rashomon, The Godfather, There Will Be Blood, and Raging Bull.

The films of Paul Thomas Anderson have often been compared to Citizen Kane, mostly in their structure and type of storytelling. On top of this, David Fincher’s Oscar-winning The Social Network has drawn comparisons with Citizen Kane, as the lead character is a media mogul and the character of Erica is essentially his “Rosebud.” Some of the most impactful and influential directors of all time have also credited the film as being foundational in their work, including the Coen Brothers, Ridley Scott, Martin Scorsese, Francis Ford Coppola, and Steven Spielberg. Whether or not Citizen Kane is the greatest movie of all time, it’s certainly one of the most influential, and the colossal stature of the movie’s creative flagbearers speaks volumes about Citizen Kane’s ongoing role in shaping the cinematic form.

How to unlock Zurg in the Disney Mirrorverse