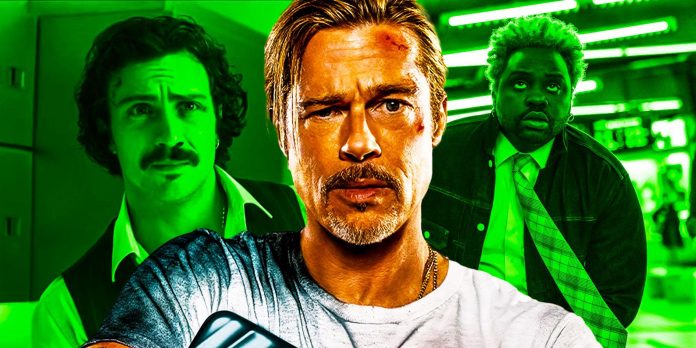 Why Bullet Train should get a prequel, not a sequel. The end of Bullet Train completes its central storyline and kills many of its characters, including Tangerine and Hornet. While the film doesn’t spend its time creating a sequel, there is the potential to do so by exploring Ryan Reynolds’ Mr. Carver, who appears in a cameo role. However, a prequel dedicated to two key characters would be better suited if the filmmakers and the studio decide to expand the universe of the bullet train.

The high-speed train is filled with assassins, each of whom is tasked with finding or protecting a briefcase filled with money, a ransom forged by the White Death to bring everyone together on the train. Two killers — Lemon and Mandarin — stand out from the rest. Brothers, the couple spends the entire time of the film showing, quarreling, making fun of each other and protecting each other from other attackers. Played by Brian Tyree Henry and Aaron Taylor-Johnson, Lemon and Mandarin’s constant banter is funny and comical. They are by far the best characters in the film, bringing a sense of history and camaraderie that the rest of the bullet train doesn’t have.

While it would be easy for Bullet Train to get a sequel about another of Ladybag’s failed adventures, it would be better if a prequel was made about the exploits of Lemon and Mandarin. Bullet Train has already revealed a couple of their previous missions, including one in Bolivia that led them to work for the White Death. Given how long they’ve known each other, their closeness, and their previous work together as assassins, the prequel could delve deeper into the history of their characters. The bullet train just scratched the surface, and since the Mandarin was killed by the end of the movie, the prequel will bring him back to work with his brother.

A potential Bullet Train sequel will bring back Ladybug, but Lemon and Mandarin are arguably more interesting characters. Maybe it’s because they have a deeper relationship than any other character in the movie, but they light up the screen with their arguments and have to defend each other no matter what. It would be superfluous to shoot the continuation of another Ladybag mission, and the audience is not invested enough in Carver Ryan Reynolds to justify an entire film about him. Rather, a potential Bullet Train prequel will see more of Lemon and Mandarin’s dynamic working and personal relationships. It is also possible that viewers will learn more about why Lemon loves Thomas the Locomotive so much. Lemon and Tangerine go well together and are often the highlight of Bullet Train, having some of the same misfortunes that often haunt Ladybug in his endeavors.

A prequel with more information about the brothers (and about them) it could become an interesting and probably entertaining film, especially since their joint machinations will be filled with pleasant banter and some nonsense. There are currently no plans for either a prequel or a sequel to Bullet Train. But if the film is successful enough, the action movie could get an expanded universe similar to “John Wick” or Netflix’s plans for the “Grey Man” franchise. A bullet train prequel about Lemon and Tangerine wouldn’t be strictly necessary, but it’s a better idea than a sequel, given how the movie ends.