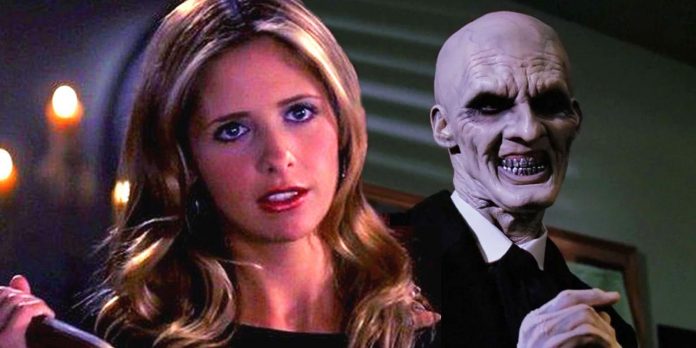 The memorable monsters of season 4 of Buffy the Vampire Slayer, Gentlemen, were better villains than any vampire in the series. The infamous Season 4 episode “Hush” is often considered one of the best episodes of Buffy the Vampire Slayer and received an Emmy Award nomination for “Outstanding Writing for a Drama Series.” This is due to his clever monster of the week, the Gentlemen, whose appearance and abilities not only ignite nightmares, but also advance the plot to the point that the characters’ lives change forever.

The entire population of Sunnydale loses its voice after gentlemen come to town. Panic begins, and not only because people have lost the ability to speak, but also because there has been a series of terribly calculated murders — several students and a teenage girl had their hearts surgically removed. Buffy and the gang have to figure out what’s going on and how to stop it, but their inability to put their thoughts into words means that the process is slow. Fortunately, Rupert Giles and his faithful books come to the rescue, and it turns out that the Gentlemen are creatures from a fairy tale, and the only way to kill them is to scream a real human voice.

Although the gentlemen’s methods are clear, their motives are less obvious. According to the fairy tale, they only steal seven hearts at a time. The fact that their motives are never fully explained only makes their presence even more sinister. They made the whole city speechless. Any city without a Slayer wouldn’t have a chance, so they could probably steal as many hearts as they wanted. This mystery only adds to what makes Gentlemen so irresistible. Their appearance, their abilities, their methods, and their influence on the overall plot, even in just one episode, make them more memorable villains than any of the vampires Buffy encountered during her tenure as a Slayer.

The most striking thing about gentlemen is undoubtedly their appearance. They hover a few feet above the ground, gracefully gliding through the city they are about to destroy. Their faces are incredibly pale, and their eyes are dark and sunken. Nevertheless, they always grin maliciously, metal teeth gleam through them, creating a striking contrast with their well-tailored suits. Their appearance, of course, catches the eye, but it is their manners that leave an indelible impression more than anything else in the world. They nod politely to each other, applaud slightly when another of the gentlemen cuts out a heart. The whole picture is incredibly disturbing, especially compared to the rather predictable and bloody exploits of vampires Buffy encounters on a daily basis. Vampires are dirty and cruel. It’s in their nature, and it’s expected of them. However, monsters that behave politely and move so gracefully seem new, unexpected and terrifying.

The gentlemen’s abilities completely eliminate one of the main elements of the horror genre. Screaming in a state of terror is one of the most natural reactions in the world. Depriving them of the ability to signal that something is wrong, especially for those who do not know other means of communication, makes them almost helpless. It also forces the characters to communicate in other ways. Riley and Buffy’s relationship has reached an impasse because neither of them will tell the other the truth. The gentlemen’s threat means they can’t avoid each other while both are doing their jobs, and Riley finds out Buffy is a vampire slayer before she was ready to tell him, forever changing their dynamic.

The Gentlemen’s ability to take people’s voices makes the characters act and communicate differently, and as a result, their lives change forever, without a single word. That’s more than most demons or vampires could ever hope to achieve. Despite the defeat in this episode, the Gentlemen left a more lasting impression than most vampires or demons Buffy encountered during the seven seasons of Buffy the Vampire Slayer.

Prey can repeat the trick with the name Predators