Home Entertainment Why are all minions men 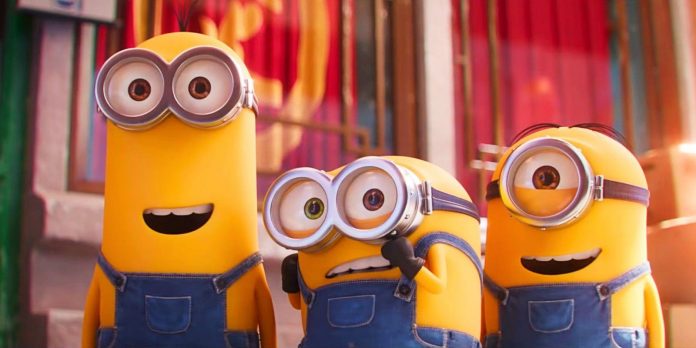 Co-author Pierre Coffin confirmed that all the undisputed stars of the popular Despicable Me franchise, the Minions, are men. The yellow-skinned pill-shaped creatures that exist to serve the world’s greatest villains have won hearts thanks to their patented combination of charm and rude behavior. First appearing in Despicable Me 2010, minions quickly gained popularity and quickly became an integral part of the films.

The minions are presented as subordinates of a (soon reformed) supervillain named Gru, voiced by Steve Carell. Having received their own origin story with the 2015 Minions, the gibberish-speaking henchmen quickly became favorites with old and young audiences. Often distracted and childishly messing around, the minions were mostly voiced by Coffin himself. The recent release of Minions: The Rise of Gru once again focused on ineffective but loyal clowns, focusing on three main members from their ranks who have become iconic, Stuart, Kevin and Bob. Their success led to the trio becoming the mascot of their production company Illumination. The Minions are due to return along with Gru Carella in 2024 with “Despicable Me 4”.

Pierre Coffin, one of the creators of the minions and the main voice actor, revealed the reason why all the minions are men. Coffin attributed their collective stupidity to the exclusively male form of minions. Speaking in a 2015 interview (via The Guardian), Coffin said: “Seeing how dumb and stupid they often are, I just couldn’t imagine that minions are girls.” Indeed, their short—sightedness and immature behavior are attributes that are not often associated with women, especially their concern about flatulence-causing gas rays. Their behavior in the Despicable Me and the Minions timeline has never been particularly gendered, with the exception of the association of male henchmen, learned over years of watching the jumpsuit-clad men who serve as fodder in James Bond and Die Hard and the like. Apart from their names, there is little to indicate any concept of gender. Each minion wears the same glasses and a common combination, with small facial features that characterize them. Stuart, Kevin and Bob can be distinguished primarily by their height and the number of eyes.

Male minions have a hidden bonus

The only identifiable male quality is their obvious stupidity, as Coffin suggests. This may seem rather reductionist in an era of gender neutrality and deconstruction of gender roles, but this male veil gives a delightful touch to the background antics of the minions. In every movie in the Despicable Me and the Minions franchise, the minions behave romantically and flirtatiously, obviously between two male minions. Two minions kiss during the moon landing in “Despicable Me”; In the beach scene of Despicable Me 2, two minions are clearly flirting with each other, and two minions are sharing a bed in Despicable Me 3. The inclusion of LGBTQ+ minions is a touching addition to an already touching series of films that perfectly represent same—sex relationships. and an infinite number of other possibilities — in family movies through already beloved characters.

Minions have undoubtedly attracted attention to the Despicable Me series, becoming iconic in popular culture. Cute henchmen continue to tease viewers with hopes for future jokes, regardless of their gender. New LGBTQ+ themes only strengthen their status as cultural icons with which children and adults can identify themselves for many years to come. The Minions will return in 2024 with the movie “Despicable Me 4”.

Bridgerton Season 2: What we suspected about Kate and Anthony’s wedding...