Home Entertainment Who is HoYeon Jung, The “Squid Game” Model and Star Everyone is...

Since the release of Squid Game , HoYeon Jung has been on everyone’s lips. In a few days, the 27-year-old South Korean has established herself as the new personality to follow. Portrait.

For the past few days, we have only seen her. HoYeon Jung is one of those young talents who hatch without warning and find themselves glorified in the snap of a finger. When Squid Game came out on September 17, two things happened. First, millions of viewers gathered on Netflix to follow the story of the participants in a dark survival game and make it one of the most-watched series in the world – and the first Korean production to top the top. 10 of the streaming platform. A spectacular success followed by the rise, this time, of the South Korean actress and model HoYeon Jung, who plays Kang Sae Byeok.

If on the screen she plays a North Korean refugee carrying the number 67, HoYeon Jung is actually a regular on the catwalks. At 27, she can already boast of having worked with major fashion houses and having participated in the most prestigious events. Her journey has been scrutinized by all fans of the series in a few days, even as nearly 5 million Internet users have rushed to follow her actions on Instagram. The enthusiasm is total.

It was at 16 that HoYeon Jung began her modeling career. At first without an agency – and with a protruding red hair – she then became known to the general public by becoming one of the finalists of the fourth season of the show Korea’s Next Top Model . Although she did not win the program, it allowed her to sign with Esteem Models, Korea’s largest model agency, and participate in Seoul Fashion Week. Over the years, she has been featured on the cover of magazines such as ELLE , Nylon and Vogue , which has nicknamed her “Korea’s next top model”.

The model then elevated her international career by parading for Louis Vuitton in 2016. From then on, the biggest houses opened their doors to her: from Fendi, Marc Jacobs, Dolce & Gabbana to Chanel, Schiaparelli, Paco Rabanne and Burberry . Her face is as famous as the sequence of her steps on the catwalk. And although everything succeeds for her on the catwalks, HoYeon Jung does not prevent herself from exploring other universes by taking her first steps in comedy.

In early 2020, she signed a contract with the company Saram Entertainment, which then enabled her to apply to Squid Game . “I was getting ready for New York Fashion Week when my agency asked me to send an audition video. All I did during that time, other than eat, was read the script, ”the model told a press conference. “Later, the director wanted to meet me in person, so I flew to Korea. ”

The rest, we know it. If the performance of HoYeon Jung on the small screen is greatly praised by the spectators, it was nonetheless carried out with a certain modesty. Because even if the model took insurance by parading for the biggest fashion houses in the world, it seemed impossible to her to have landed the role of Kang Sae Byeok. “When my CEO told me I had been chosen, the first thing I said was, ‘Why?’ I was so happy when I heard the news, but it was like a greater fear had taken hold of me. I thought to myself, “Thank you very much, but can I do this?” “, She told in an interview with W Korea .

She did it. And the character Kang Sae Byeok suits her perfectly. It didn’t take long before she got into the shoes of this North Korean refugee because she looks like her in many ways. Still in the columns of W Korea , HoYeon Jung explained by comparing her career to that of the young woman she embodies: “In 2016, I left Korea to pursue my modeling career abroad, and I spent a lot of time alone. Back then, the emotion I felt the most was loneliness… This feeling experienced while trying to persevere and live is not that different. You have to believe that loneliness is sometimes good. 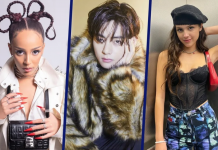