Home Entertainment Who is Christopher at Umbrella Academy? Where Did He Come From? 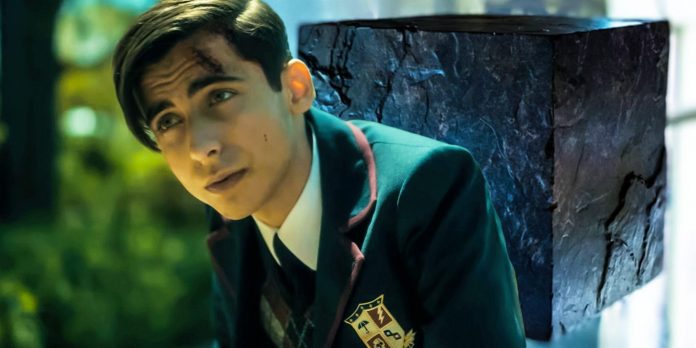 Where did Christopher, the flying cube of Sparrow Academy, come from at Umbrella Academy? When the Nasty Sparrows debuted in the final moments of the second season of Umbrella Academy, they consisted entirely of silhouettes, with the exception of Ben Hargreaves and the mysterious levitating cube. On the eve of the premiere of season 3, Netflix introduced this cube as Christopher Hargreaves – the seventh member of the Sparrow Academy, capable of firing powerful psionic explosions. It’s a shame that the marketing materials say absolutely nothing about Christopher’s origin, or why his physical form resembles a large paperweight.

The 3rd season of “Umbrella Academy” has finally appeared on Netflix… but is not in the least generous with details about Christopher. Sparrow Academy treats its cube like an ordinary brother, and although the Umbrella kids make a few comments about the oddities of a reasonable LEGO brick, there is never a proper discussion of Christopher’s nature. Umbrella Academy deliberately sidesteps the problem like a killer elephant in a room, but a few details can be gleaned. The opening scene of the third season of Umbrella Academy shows that Sir Reginald Hargreaves adopted seven children in full in 1989, which means that Christopher was present from the very beginning. However, for obvious reasons, we can rule out that Christopher was born from a human woman in his current form…

Christopher could be an alien. Since the Harlan outbreak accidentally prevented the birth of most of the 43 children, Sir Reginald could look for members of his Sparrow Academy outside of Earth. There is nothing in the Umbrella Academy’s knowledge that would indicate that his magic vessel with lights remained on one planet, so an intelligent cube from a foreign land could be among the 43 chosen mothers. Sparrow Reginald fails to take seventh place on Earth, so he visits this otherworldly planet and adopts its shiny metal newborn.

If he wasn’t from another planet, Christopher could have been artificially transformed like Luther. Perhaps “Christopher Hargreaves” was originally an ordinary human child, but during the mission he got into an accident. Instead of losing his precious number seven, Sir Reginald transferred Christopher’s consciousness into a metal case, and after that the child learned to communicate with his brothers and sisters with the help of exclamations and noises. Evidence for this theory may appear at the season 3 premiere of Umbrella Academy, when the camera sweeps through the Hargreaves mansion and shows an old photo of a boy hugging another child. The Ancub Christopher, perhaps?

Where was Christopher in the original Umbrella timeline?

Marcus, Faye, Alfonso, Sloane and Jamie were obviously not chosen for Sir Reginald Hargreaves’ original Umbrella Academy, but they all existed somewhere in this timeline. Fortunately, all these five have abilities that can be hidden if you behave with restraint. On the other hand, a floating metal cube can attract attention…

Christopher Hargreaves’ location in the original Umbrella Academy timeline depends entirely on his backstory. If Sparrow Number Seven had been born on an alien planet, that’s where he would have stayed during Umbrella’s existence, presumably among other intelligent blocks. Without Sir Reginald recruiting him, the alien Christopher will never arrive on Earth. However, if Number Seven had been an ordinary child who turned into a cube after a tragic accident, his counterpart from the Umbrella timeline would most likely have remained human. Without Reginald adopting him, Christopher never gets injured during a mission, and he never needs to transform into a cube. Since the strange metallic intelligence would inevitably make headlines around the world, it seems logical.

Although Christopher explodes in season 3 Umbrella Academy, time is once again shaken up ahead of Season 4, when Sir Reginald Hargreaves changes the universe at will. As can be seen from Ben’s unexpected appearance in the post-credits scene, the deceased Academy members may still be alive in Reggie’s remade reality. This will allow Christopher Hargreaves to return in Season 4 Umbrella Academy, where the secret of his origin can finally be revealed.

TikTok Will Increase The Length Of Videos To 10 Minutes