Home Entertainment Who Is Boba Fett? Where And When Is The Series Set In... 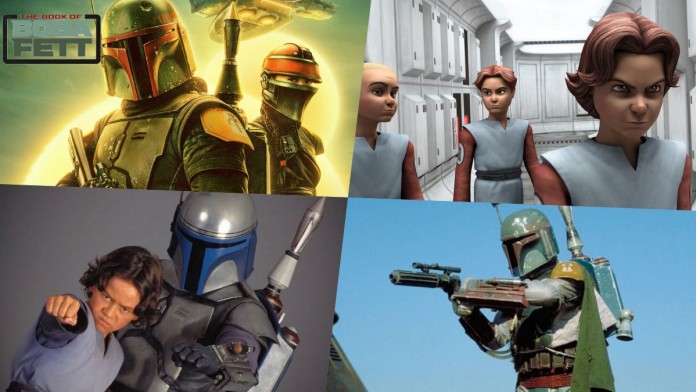 Boba Fett: The new original Star Wars series will begin airing on December 29 on Disney Plus. The Book of Boba Fett is the spin-off of The Mandalorian, an unpublished Star Wars series starring the best-known bounty hunter in the universe created by George Lucas, although Fett himself says that he is not one of them in the first trailer of the series, which recently premiered. The character was “resurrected” (never died) in the second season of The Mandalorian, which takes place after Return of the Jedi. As for The Book of Boba Fett, the events take place right after the aforementioned Season 2. Below we summarize its story through the main products. Watch out, spoilers are coming.

Boba Fett first appeared in the classic trilogy, in The Empire Strikes Back. Despite not having a particularly relevant role, in the sense that it does not delve into his personality, his design and charisma did not take long to make him one of the fan favorites. As a bounty hunter in Jabba’s service, Fett strikes a deal with Darth Vader: the Galactic Empire tests the carbonite freezing process with Han Solo (the goal is to do the same with Luke Skywalker). Once his survival is determined, they give it to him to decorate Jabba’s Palace, for which he collects good emoluments from the crime boss.

A recent comic, War of the Bounty Hunters, tells an unpublished story in which Boba Fett must win back Han Solo. The piece of carbonite has been stolen by other criminals, but they do not know who they have messed with.

He didn’t die in the stomach of the Sarlacc?

In Return of the Jedi, the heroes hatch a plan to rescue Han Solo from his depressing fate. Unfortunately, at first, Jabba discovers the play. As a result, Luke, Chewbacca, Han, and company are sentenced to death. It is then that we see Boba Fett again, who confronts the group after they manage to escape from his bonds. The Sarlacc, a creature that takes years to digest its victims, gobbles it up unceremoniously. All in all, thanks to The Mandalorian, we know that he managed to escape (not without scars).

Upon Jabba’s death, his lieutenant Bib Fortuna seizes the criminal empire. Of course, this reign ends abruptly in the epilogue to The Mandalorian. Boba and Fennec Shand take care of it. From that moment the boss is Boba Fett, but he has to win over Jabba’s captains. Part of the story takes place on Tatooine, but the character is seen in other locations in the same trailer.

Boba Fett’s intrahistory took on new nuances in the prequels. We discover that he is one of Jango Fett’s clones, only this time it is a copy that grows at a normal rate, so his life expectancy is exactly the same as that of any other human. Since Boba sees his father die, beheaded by Mace Windu, he lives immersed in hatred, which is reflected very well in the animated series The Clone Wars. He tries to assassinate Windu to no avail, but begins to forge his life as a bounty hunter.

Star Wars: The Book of Boba Fett is coming December 29 on Disney +. Temuera Morrison, who played Jango Fett and the clones in the sequels, plays Boba Fett in this new stage.

Wii Sports GOAT is Back in Nintendo Switch Sports

Ratchet & Clank: A Series of Unforgettable Adventures Before A Dimension...