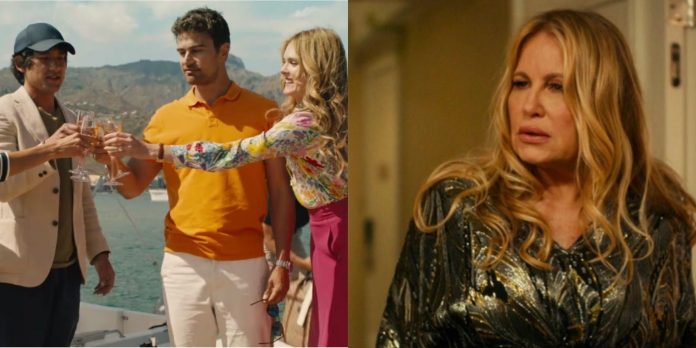 HBO has just released a sneak peek at its upcoming lineup of shows, one which surprisingly contained footage for season 2 of the smash hit, The White Lotus. Considering that the writers had intended for the show to be a limited series (via Vulture), fans are more than excited to see what is in store – especially after that surprising death, which had everyone talking for months.

While it wouldn’t be surprising if Murray Bartlett didn’t sign up for the following season given his character’s demise, fans shouldn’t let this news disappoint them as plenty of other iconic actors are either reprising their roles or joining the line-up.

One of the biggest revelations from the new footage was that a previously unannounced second character from season 1 will be returning. Jon Gries will check into the White Lotus once again as Greg, Tanya’s (Jennifer Coolidge) love interest (via Digital Spy).

Related: The 10 Best HBO Miniseries Of All Time, According To Ranker

Gries is perhaps best known for his performance in Napoleon Dynamite, where he played Uncle Rico. Rico, who would embrace get-rich-quick schemes, was significantly different from Gries’s character on The White Lotus, who revealed at the end of season 1 that he suffered from a terminal illness. Still, Tanya stayed with him, which meant that audiences would have the opportunity to see Greg again.

Fahy will be one of the new members of the cast this season and is slated to play Daphne Babcock, a guest at the White Lotus hotel in Sicily (via The Hollywood Reporter). Not much has been revealed yet about Fahy’s character, but this will be Fahy’s first major collaboration with creator Mike White.

Fahy’s prior work on television includes her role as a series regular on the Younger-esque TV comedy The Bold Type, in which she played a stylist for a fashion magazine loosely based on Cosmopolitan. Fahy’s comedic skills from The Bold Type should lend themselves well to Mike White’s quick-witted dialogue.

As the husband to Meghann Fahy’s Daphne, Theo James will play Cameron Babcock (via TV Line). Although James has appeared in a number of films and television programs that range from action to period drama, he has yet to appear in a comedy like The White Lotus.

James recently starred in another HBO program, the cancelled adaptation of The Time Traveler’s Wife opposite Rose Leslie. While audiences hope for more successful results with The White Lotus, James will likely bring a similar brooding charisma to the small screen.

Acclaimed British actor Tom Hollander will play Quentin, an expatriate (via Variety). This is another new character on the series, and Mike White has been tight-lipped about revealing too many details.

Hollander has had a thriving career on stage and screen. He has played supporting roles in a wide array of projects from the Pirates of the Caribbean franchise to his portrayal as Jim Beach in Bohemian Rhapsody. His ability to adapt from medium and medium will serve him well on a show that tends to walk the fine line between various genres, from dark comedy to social satire.

One of the more prestigious additions to The White Lotus cast is Academy Award-winning F. Murray Abraham, who will play hotel guest Bert Di Grasso and father to Michael Imperiori’s character (via Deadline).

Abraham has had a diverse career, from his portrait of Antonio Salieri in the Oscar-winning Best Picture Amadeus to his supporting roles on recent television series like Homeland and Mythic Quest. Abraham tends to play authoritative characters with a villainous angle, so if that trend serves as any indication, his character on The White Lotus could potentially be an antagonist.

Imperioli will return to HBO primetime with his role on The White Lotus as Dominic Di Grasso, F. Murray Abraham’s on-screen son (via The Rolling Stone). This is his first television series since the short-lived NBC drama Lincoln Rhyme.

Imperioli’s best-known role so far is undoubtedly that of Christopher Moltisanti on the classic series The Sopranos, for which he won an Emmy Award. Christopher’s complicated pseudo-father-son dynamic with James Gandolfini’s Tony Soprano could be effectively echoed by the father-son dynamic at play in The White Lotus.

Aubrey Plaza’s addition to The White Lotus cast seems like it will be a perfect match (via The Hollywood Reporter). Her dry wit and grounded presence on-screen will add plenty of characterization to the role of Harper Spiller.

Related: 10 Memes That Perfectly Sum Up Parks And Recreation

Plaza charmed audiences in her breakout role opposite Chris Pratt in NBC’s Parks and Recreation. Her return to television comes after a string of successful performances in independent films like Black Bear and the upcoming Emily the Criminal. Whether she’s in a comedy or a dark indie drama, Plaza always commands the viewer’s attention with unique touches only she can bring to her characters.

The undeniable standout performance from Season 1 of The White Lotus was Jennifer Coolidge’s star turn as Tanya McQuoid, a wealthy woman who is dealing with her mother’s loss while also realizing how her economic position can come with privilege and ignorance.

It comes as no surprise that shortly after HBO renewed The White Lotus for a second season, Coolidge’s character was quickly announced to be returning (via Variety). It will be curious to see if Tanya learned anything from the events of season 1; her reunion with Greg seems to suggest that she has come to accept impending death as a part of life. However, Mike White’s cynical voice will likely continue to poke holes in Tanya’s growth.

Red Dead Online player was scared of jumping because of a...

Everything We Know about MCU Blade