Home Entertainment Which upcoming films of 2022 could win the Top Gun 2 box... 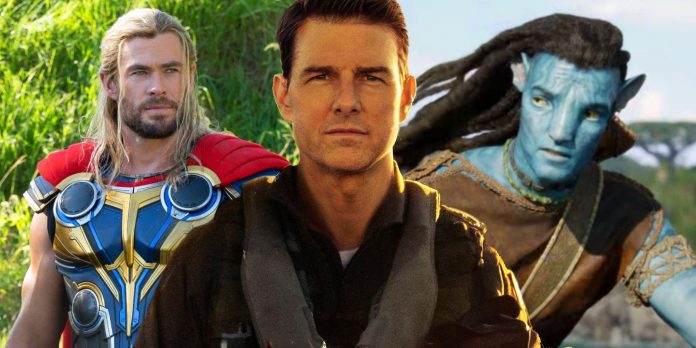 Top Gun: Maverick is the highest-grossing movie of 2022 so far, but with six more months left to go, there will be many movies hoping to challenge Maverick’s box office dominance. Released over 30 years after the original, Maverick is a surprisingly heartfelt movie about nostalgia, legacy, and growing old gracefully. It also features Tom Cruise doing really cool stunts in a fighter jet, which guarantees big box office numbers. Maverick has, at the time of writing, grossed over $474 million in the US and $901.8 million worldwide. Continuing to perform well against recent releases, Jurassic World Dominion and Lightyear, Top Gun 2 could break the $1 billion barrier.

However, 2022 isn’t over yet, and there are plenty more blockbuster movies on the way. Tom Cruise’s relative charms, thrilling action sequences, and the ’80s nostalgia for Top Gun may have performed well against empty IP cash-ins like Lightyear and Jurassic World Dominion, but it remains to be seen how Maverick will fare against some more robust competition. Upcoming releases in 2022 include returns for the Minions, Thor, and the long-awaited return to Wakanda and the world of James Cameron’s Avatar.

While Doctor Strange in the Multiverse of Madness is currently the highest-grossing film worldwide, its arrival on Disney+ marks the wrapping up of the theatrical window. This means that the record-breaking Top Gun: Maverick will likely close the increasingly narrow gap to claim the global top spot. There are several reasons why a sequel to a 36-year-old movie has beaten the juggernaut of the MCU and will likely do so again when Thor: Love and Thunder releases in July. However, Maverick will face stiffer competition from another MCU movie, Black Panther: Wakanda Forever, and Avatar: The Way of Water, the long-awaited sequel to the highest-grossing movie of all time.

Top Gun: Maverick has broken several box office records during its theatrical window. Despite the efforts of both Buzz Lightyear and a Jurassic Park reunion, Maverick is on track to outperform the original Top Gun’s box office haul. Other impressive statistics for Maverick include breaking Cruise’s previous highest domestic gross, outperforming both 2005’s War of the Worlds and 2018’s Mission Impossible: Fallout. A sequel to a 36-year-old movie can break so many box office records may surprise some, but there are several reasons for Maverick’s impressive performance.

Firstly, the hugely positive critical response and audience word-of-mouth have clearly worked in Maverick’s favor, allowing it to sustain a high box office ranking and experience a very low dip in takings week-on-week. It’s clear there’s an appetite for movies like Top Gun: Maverick in 2022. Maverick is a blockbuster movie for grown-ups. In a cinema landscape populated by Star Wars sequels, cartoon franchises, and superhero movies, there are surprisingly few options for adult audiences. Alongside all the stunts, topless beach sports, and action set-pieces, there’s a melancholic tone to the Top Gun sequel that goes beyond empty nostalgia, ensuring Maverick avoids the problems of similar legacy sequels. Maverick simultaneously moves Pete Mitchell’s story along while staying true to what made the original movie so appealing to audiences. Above all else, Top Gun: Maverick is the sort of thrilling, escapist, big-screen blockbuster entertainment that audiences were starved of during a global pandemic.

This summer sees the release of Minions: The Rise of Gru and Thor: Love and Thunder, two movies that will perform strongly at the box office. However, it’s unlikely they’ll outperform Top Gun: Maverick as it continues to play in theaters. The release of Chris Hemsworth and Taika Waititi’s previous movie Thor: Ragnarok back in 2017 had a total domestic gross of over $315 million and a worldwide gross of nearly $854 million, far behind the money already made by Maverick. While MCU movies always perform well, and audiences are keen for more of Waititi’s vision for the Asgardian, it’s unlikely that Thor: Love and Thunder will outperform its predecessor in a substantial enough way to challenge Maverick’s dominance.

The previous Minions movie had figures similar to Thor: Ragnarok when it was released in 2015. It performed better than Thor: Ragnarok domestically with a gross of over $336 million but didn’t quite match Ragnarok’s global takings with an overall worldwide gross of over $823 million. While an origin story for Despicable Me’s Gru may entice audiences more than the first movie’s more Minion-centric plot, it’s unlikely that a movie primarily aimed at kids and adults that should know better will outperform Maverick in 2022’s overall box office.

A more serious contender for Top Gun: Maverick’s crown is Black Panther: Wakanda Forever. Released in 2018, Black Panther was a shot in the arm for the MCU, garnering critical acclaim and a whole new audience through its afro-futurist aesthetic and diverse cast. To date, it’s the only MCU movie to win an Academy Award and was the first superhero movie to be nominated for Best Picture. The overall domestic gross for Black Panther was over $700 million, with a worldwide gross of $1.3 billion. It’s an impressive list of accolades for the sequel to live up to and is a strong contender against the Top Gun sequel.

In its fourth week of release, Maverick became one of only four movies to gross over $40 million in their fourth week. Black Panther achieved the same record during its 2018 release, grossing $40.8 million in its fourth week at the box office. Maverick’s figures are slightly higher, grossing $44 million, beating Black Panther and toppling Star Wars: The Force Awakens from its second-place position. If Maverick continues this trajectory, it suggests that 2022’s box office battle between Wakanda Forever and Top Gun: Maverick could be a close-run thing. However, there’s another film on this hallowed list that outperforms all others, James Cameron’s Avatar, the sequel to which releases this Christmas.

Avatar was a huge hit when it was released in 2009. Critics have claimed that audiences will have lost interest in the intervening 13 years, but the success of Maverick proves Avatar 2’s critics wrong. The main selling point of Avatar was Cameron’s use of 3D technology and visual effects to immerse audiences in an alien world. While the story was familiar to audiences with a passing knowledge of anti-colonial and ecological fables, the stunning visuals were what guaranteed the movie’s impressive box office figures.

In the small list of movies that have grossed over $40 million in their fourth week, Avatar is head and shoulders above the rest. It grossed $50.3 million after four weeks in theaters and eventually grossed almost $2 billion worldwide on its first release, while the release of the 2010 special edition grossed another $34 million. The sequel, Avatar: The Way of Water, has taken so long to make because Cameron wants to make Avatar 2’s CGI even more groundbreaking, especially as water is notoriously difficult to simulate with CGI. If Cameron and his team can repeat the immersive successes of Avatar underwater and, crucially, sell that to a paying public, then Avatar: The Way of Water will be the film to take Top Gun: Maverick‘s box office crown.

Wesley Snipes was not asked to star in the cameo role...