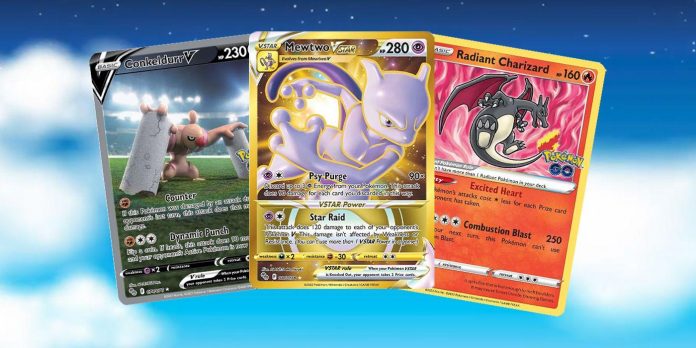 With the Pokémon Trading Card Game Pokémon GO set now in stores, many collectors may be wondering which cards in the TCG crossover are worth the most money. To celebrate its sixth anniversary, Pokémon GO has teamed up with the TCG to create a special set that is based on the mobile game. Although the Pokémon GO TCG expansion features many beloved characters and Pokémon from the popular Niantic title, some cards in the set are more valuable than the others.

Because the Pokémon GO TCG expansion is releasing in the final year of the Sword and Shield series, the crossover set will feature many rare V, VMAX, VSTAR, and Radiant Pokémon cards. Adding to the collectibility factor is that many of the cards feature artwork depicting iconic features and items from Pokémon GO such as Lure Modules and Egg Incubators. The collaboration even features a new peelable Ditto card, which replicates Pokémon GO’s popular Ditto disguise mechanic.

Related: What Pokémon TCG Astral Radiance Cards Are Worth The Most Money

However, the Pokémon GO factor doesn’t seem to have been as big as some anticipated, as most of the expansion’s most valuable cards are not specific to the mobile game. Like many Pokémon Sword and Shield TCG sets released in the last three years, collectors have gravitated towards Legendary Pokémon such as Mewtwo. The Alternate Art card variant also continues to dominate, as the Pokémon GO Mewtwo V card has quickly soared in sales. Below is a breakdown of which Pokémon GO TCG cards are worth the most money.

Decades after its worldwide release in 1998, Pokémon Red and Blue is still one of the series’ most popular generations. So it should come as little surprise, that Kanto Legendary Mewtwo has quickly taken the crown as the Pokémon GO TCG’s most valuable card. Coming in at second place is the Psychic-type’s debut as a VSTAR card. The rare variant made its first appearance in February’s Pokémon Brilliant Stars TCG expansion and has already made a splash in the competitive scene due to the card’s incredibly powerful stats. The Secret Rare Gold Mewtwo VSTAR has already been selling on auction sites for as high as $80 but has on average been going for $50.

The Pokémon GO TCG’s most valuable card goes to the Alternate Art Mewtwo V card. Ever since its inclusion in the Sun and Moon TCG, fans can’t seem to get enough of Alternate Art cards which feature full artwork depicting Pokémon in unique locations. Collectors have gone into a frenzy for the Mewtwo V Alternate Art card, which has sold for $170 on the high end. Day after the set’s release, the rare Mewtwo has settled to be selling for $70 on average, making it the crossover sets most expensive card.

The Pokémon GO TCG’s Radiant cards have been some of the most anticipated collectibles in the Niantic crossover, due to the variant featuring popular Kanto Pokémon Charizard, Venusaur, Blastoise, and Eevee. Out of the four, Charizard has taken the lead as the most valuable Radiant Pokémon card by a large margin. Collectors have been willing to shell out as much as $80 for the Radiant Charizard card, though it has generally been selling around the $50 range. This isn’t too surprising, as Charizard consistently polls as one of the most popular Pokémon in the franchise.

In comparison, the other Radiant cards in the TCG set have been selling for far less. For example, Radiant Venusaur and Radiant Blastoise have both been selling for around $12 on auction sites. The gorgeous Radiant Eevee has been going for even less at $6, due to being a common promo card packaged in with the Pokémon GO Ultra Premium Collection.

In the Gen 1 Pokémon Red and Blue RPGs, Dragonite was one of the Kanto Region’s most popular non-Legendary Pokémon for players to catch. Living up to its popularity from both the original games and the Pokémon anime, the beloved orange dragon has become the most valuable regular Pokémon in the Pokémon GO TCG set. Dragonite’s debut as a VSTAR card has both fans and players scrambling to find the collectible, as it’s desired in both the collector and competitive scene.

Pokémon TCG collectors were willing to shell out $80 for early copies of the Secret Rare Rainbow Dragonite VSTAR, although the Full Art card has since been selling on average for $35, showing a not-insignificant decline in value. Due to the Dragon’s immense popularity, however, the Rainbow Dragonite VSTAR’s value potential has a lot of room to grow. Once graded copies of the rainbow card start to hit the market, we could see the Pokémon GO TCG Dragonite hit bigger sales numbers over time.

The Niantic crossover also features the Pokémon GO Team Leaders Spark, Candela, and Blanche as Trainer cards. After setting up an account in Pokémon GO, players get to choose from one of three factions: Team Mystic, Team Instinct, and Team Valor. Trainers are then able to connect with other users on the same team and take over Gyms and collect points, thereby providing an element of cooperative play.

Since the game’s launch in 2016, there has been a rivalry between fans over which team from Pokémon GO is actually the best. In the Pokémon GO TCG expansion the debate has seemingly been settled, as Team Leader Spark has taken the top spot in sales. The Spark Trainer card has been climbing in value since the set’s launch in July and has been selling for around $20. In comparison, Candela has been going for $12, while Blanche has been averaging out around $9.

Following the launch of the Pokémon GO crossover in July, the next Pokémon card set to release is the Pokémon Sword and Shield Lost Origin TCG expansion. The September set will bring back the “Lost Zone” mechanic and will feature the debut of Legendaries Kyurem and Girataina as VSTAR cards. With Gen 9 Pokémon Scarlet and Violet also releasing in November, the Pokémon Trading Card Game will have many more collectibles set to release this year that could also end up being worth a lot of money.

Like Lana Condor and The Boo, Bitch Cast made their Netflix...