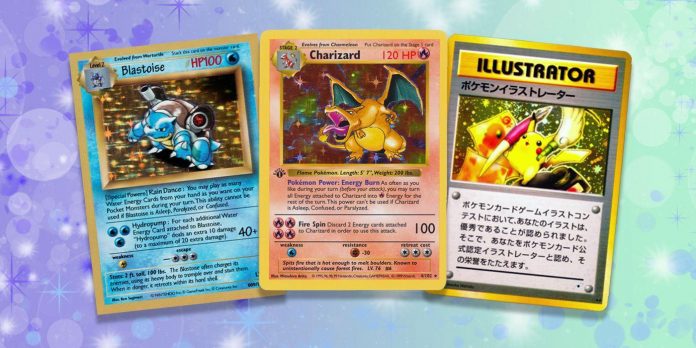 With the Pokémon Trading Card Game seeing a major revival in popularity in 2022, there are many TCG cards that are now worth a lot of money. Following the release of the Pokémon Red and Blue Kanto RPGs in 1998, Game Freak launched the Pokémon TCG in North America a year later. Just like the Gen 1 games, the TCG became an instant worldwide phenomenon as players obsessively tried to collect their favorite Pokémon in card form. Despite being worth little decades ago, there are many Pokémon cards that now sell for hundreds of thousands of dollars in 2022.

The Pokémon TCG made its worldwide debut with the release of the Base Set expansion in 1999. The classic Gen 1 card set featured some of Kanto’s most popular Pokémon such as Blastoise, Mewtwo, and Alakazam. However, the card every kid in the ’90s wanted was the rare Base Set Charizard Pokémon card which featured artwork from renowned Creatures Inc artist Mitsuhiro Arita.

In 2022, the legendary TCG Charizard card has now sold for over $400,000 at various auctions. The Kanto Fire-type Starter isn’t the only expensive TCG collectible though, as the Nintendo tabletop game now has quite a few cards that are worth record-breaking values. Below is a list of the top ten Pokémon cards that are worth the most money in 2022.

In 1998, Japanese Pokémon TCG fans could enter a special University contest in Shogakukan magazines. Players who passed the tests that were published in the magazines were then invited to attend a special two-day event in Osaka. The contestants who made it into the top ranking were given a rare promo featuring the artwork of Gen 1 Kanto Pokémon Magikarp.

Because the Magikarp collectible was only given out to a few fans who won the 1998 event, the Japanese card is one of the TCG’s rarest promo cards to ever exist. The card is so scarce, that there are only fourteen known to exist in the whole world that has received a perfect ten score by the grading company PSA. In April 2022, a University Magikarp Pokémon card sold for $78,000 at a PWCC auction.

The popular Gold Star Pokémon card variant first made its debut in the 2004 TCG expansion EX Team Rocket Returns. In 2005, the official Pokémon Players Club gave out a rare Gold Star Umbreon promo card that was notoriously difficult to obtain. Ever since its first appearance, the card has become one of the series’ most iconic Gold Stars and was even reprinted in the 25th anniversary Pokémon Celebrations TCG set in 2021.

Japanese TCG players who wanted the Pokémon card in 2005 had to earn 70,000 points by the end of the Pokémon Players Club’s fourth season. Because it was the most difficult promotional card to earn in the club’s history, the population of the original Gold Star Umbreon is really low. A pristine PSA 10 version of the Japanese Pokémon card appeared decades later in a December 2021 PWCC auction, where a bidder paid 78,000 for it.

In 1999, Japanese players who ranked number one in seven of the official Pokémon TCG regional tournaments were given the No. 1 Trainer Super Secret Battle Pokémon card. The exclusive reward featured a gorgeous holographic artwork depicting popular Red and Blue Kanto Legendary Pokémon Mewtwo.

The rare promo wasn’t just any ordinary reward though, as it actually revealed the location of a finals tournament that was held in secret. The No. 1 Trainer promotional card granted winners access to the Super Secret Battle contest held in Tokyo. A perfect PSA Gem Mint 10 version of the No. 1 Trainer Super Secret Battle Pokémon card sold at a 2020 Heritage Auction for $90,000.

Some of the rarest Pokémon card collectibles are prize cards, as the only fans who can obtain them are the TCG’s top players. The Pokémon World Championships trophy cards are particularly some of the TCG’s lowest populated cards as only the first and second-best players in the entire world are given them.

Related: What Pokémon TCG Astral Radiance Cards Are Worth The Most Money

In the 2006 Pokémon World Championships held in Anaheim California, a No. 2 Trainer card was given out that featured Gen 1 Kanto Pokémon Mascot Pikachu holding a trophy. There are believed to only be three that were created, making this truly one of the TCG’s scarcest promo cards in existence. Incredibly, one of the No. 2 Trainer Pikachu trophy cards popped up in 2021 and sold for $110,100 during a PWCC auction.

The Pokémon TCG released its first Gen 2 cards in 2000 with the launch of the Neo Genesis expansion. While the set featured many Johto favorites such as Typhlosion and Feraligatr, the expansion’s crown jewel was the holographic Lugia. The rare Pokémon card featured artwork by iconic Game Freak designer Hironobu Yoshida who drew Gen 2 Johto Legendary Pokémon Lugia flying through the sky.

Decades after its debut, Lugia has become one of the most popular Legendaries in the Pokémon franchise. So it should come as no surprise that its debut TCG card is now highly sought-after. The Neo Genesis collectible is so popular, that a Beckett graded 10 version of the 1st Edition Lugia card sold for over $144,300 during a PWCC auction in 2021. The epic Lugia card has continued to rise in price over the years, so the sky is the limit of what it could end up being worth in the future.

In May 1998, the Pokémon company hosted a special Mega Battle tournament for parents and their children. Entrants to the contest consisted of a parent and child duo, who teamed up together in a series of Pokémon card battles. Teams that managed to achieve a certain number of wins, were then rewarded the Kangaskhan Family Event trophy Pokémon card.

The TCG promo features Gen 1 Kanto Pokémon Kangaskhan posing with its baby hanging out of its pouch. The collectible’s adorable artwork has made this one of the most popular Pokémon trophy promo cards. One of the few PSA 10 graded Kangaskhan Family Event cards went up for sale during a 2020 PWCC auction, where a bidder paid $150,100 for the Parent/Child Mega Battle tournament prize.

One of the TCG’s biggest oddities is the Ishihara GX card created in 2017. The mysterious card features the artwork of The Pokémon Company’s President Tsunekazu Ishihara as an Ultra Beast holding Sinnoh Ghost-type Rotom. Many players may have never even heard of the Pokémon card as it was never actually released to the public.

The rare TCG card was actually created for Tsunekazu Ishihara’s 60th birthday in 2017 and was only given out to Pokémon Company employees. Since only official employees were able to obtain the Ishihara GX Pokémon card, it’s very rare to see the promotional TCG item in private collectors’ hands. Despite its scarcity, an Ishihara GX actually appeared in a Goldin Auctions sale in 2021 and sold for $247,230. What made the rare card all the more unique, is that it was actually autographed by Tsunekazu Ishihara himself.

In 1998, Wizards of the Coast were in early talks with Nintendo to print the English version of the Pokémon TCG’s first expansion. In order to get approval from Nintendo, the card company created a couple of presentation Pokémon card prototypes to present to the Japanese company. One of the presentation cards shown off featured Pokémon Blue mascot Blastoise. Because it was a presentation piece, the Pokémon card doesn’t actually have artwork on the back and is instead blank.

Incredibly, the early TCG prototypes managed to survive over two decades later to be graded by CGC. The rare collectible went up for sale at Heritage Auctions in January 2021 and sold for a record-breaking $360,000. What makes this collectible even rarer is that there were only two of the prototype card ever created. The fact that it’s also the first English card for a Red and Blue Kanto starter evolution Pokémon truly makes it a one-of-a-kind collectible with major historical significance.

When the Base Set TCG expansion was released in 1999, the most sought-after card for many children was the iconic Charizard. Decades later, the Fire-type starter evolution still reigns supreme as the most popular Pokémon card. Even in modern TCG expansions like 2022’s Brilliant Stars, Charizard ends up being the most valuable card that collectors try to chase down. So it should come as no surprise, that the most valuable Pokémon card for decades was the 1st Edition Charizard from the very first TCG expansion.

After the TCG had a major resurgence in popularity in recent years, a bidding frenzy had kicked off for the Gen 1 Kanto Starter in various online auctions. In 2020, popular rapper Logic dropped $226k for the popular Charizard Pokémon card. Just a few years later though, the Gen 1 Pokémon card would end up selling for a lot more. In a March 2022 PWCC auction, a rare 1st Edition Shadowless Charizard Pokémon card sold for $420,000 to become the world’s most expensive Pokémon card. However, that record was short-lived after another card dethroned the Base Set collectible just a few months later.

In 1997, the Pokémon Card Game Illustrator Artist Contest was announced in the CoroCoro Comic publication. Japanese fans were able to enter the special contest by submitting their own Pokémon drawings to the magazine. In 1998, 23 winners received the Pikachu Illustrator TCG promo card. An additional 16 winners were given the card a year later before the Pikachu promo was never made again. Decades later, only a handful of the promotional card has survived in good condition.

The CoroCoro Pikachu TCG reward became the most valuable Pokémon card of all time in 2022, after selling for $900,000 in a Goldin Auction. Unbelievably, that record was overtaken in April when YouTuber Logan Paul revealed that he had paid $5.2 million for the only PSA 10 Pikachu Illustrator known to exist in the entire world. The Logan Paul Pikachu Illustrator Pokémon card sold for such a high price, that it even earned a Guinness World Record.

Since it appears that there won’t ever be another PSA 10 Pikachu Illustrator, it will take a lot for another Pokémon card to break this record. As of 2022, most of the most valuable TCG collectibles are mainly from the classic Wizards of the Coast era sets. Although with the Pokémon Trading Card Game‘s continued revival in popularity, fans may see more and more modern cards rise in prices.

Two and a Half Men: Very similar series that you will...