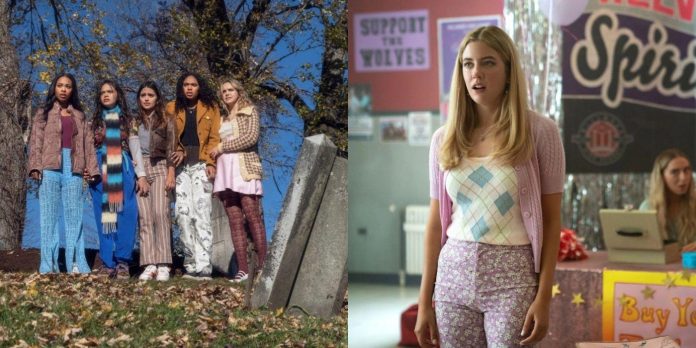 In an interview with Teen Vogue,Troian Bellisario shared her excitement for the HBO Max spin-off Pretty Little Liars: Original Sin. The actor, who played Spencer Hastings on the original series, said, “But what I loved from seeing the trailer is that it felt that the essence of the series was still there in that they were making these bold choices of who these young girls were.” Bellisario also likes the creative choice to make Imogen Adams pregnant and added, “it’s going to create some really incredible stories.”

The spin-off sees teenagers learning that their moms share a horrible secret from 22 years earlier, something that is sure to result in a season 1 that is just as juicy as the OG show. Fans can find the cast on Instagram and follow along.

Carly Pope appears on Pretty Little Liars: Original Sin as Imogen’s mom Davie Adams. Pope is known for her role as Sam on Ryan Murphy’s teen drama Popular, which is often thought to be one of the best teen dramas, although it’s underrated and didn’t get as much attention as other series on The WB.

In the pilot episode, Davie receives a flyer from a party that she attended in 1999, along with a creepy note written on the back suggesting that someone is aware of the secret that she and her former friends are still holding close. This is perfectly dramatic and it’s hard not to want to watch the rest of the season immediately.

Eric Johnson plays Sheriff Beasley, the father of twins Karen and Kelly who is strict, rigid, and seems totally unfair. He’s the kind of parent who is never happy with what his children have accomplished and always thinks that they can do more. The actor is known for playing Eric on Vikings.

While nothing excuses the mean girl behavior that Karen exhibits, watching her and her family have dinner in the pilot episode does shed some light on why Karen feels the need to be the best and to compete with her other classmates.

Alex Aiono plays Shawn Noble, Noa Olivar’s boyfriend who seems supportive and kind. Previously, the actor played Walter Taumata in Doogie Kameāloha, M.D. Aiono has a large Instagram following of over 2 million people and recently shared that it was a great experience making the show: “What an adventure this season of filming was.”

It seems that Shawn will be a meaningful part of Noa’s life as she becomes friends with the other girls and they band together to figure out who is stalking them and sending them creepy text messages and as they figure out what really happened to their moms back in the day.

Lea Salonga plays Mouse’s mom Elodie on PLL: Original Sin and previously played Jade Taylor in almost 200 episodes of As The World Turns. The actor is also an acclaimed singer who has released several albums and also appeared in many musicals.

Salonga has 1 million followers on Instagram and has recently shared some photos and videos about Pretty Little Liars: Original Sin. The actor and singer also recently toured in the UK, performing in Glasgow, Canterbury, London, Manchester, and Brighton, among a few other places.

Elena Goode plays the role of Noa’s mom Marjorie Olivar, who is a nurse and who was friends with the other characters’ moms several decades before. The actor played Nicole in the 2015 film Straight Outta Compton.

Marjorie seems to be one of the best TV moms as she works hard and cares a lot about her daughter. All she wants is for Noa to be happy and to succeed, and while they might have the regular tension that viewers expect from TV families on teen dramas, it will be interesting to see how this dynamic plays out.

Sharon Leal plays Tabby’s mom Sidney Hawthorne, who was part of the friend group who witnessed the death of one of their pals and who has carried around a secret ever since. Leal played Renee in the teen drama Dead of Summer and Breeze Browne on The Good Doctor.

Tabby and Sidney seem to have a fairly good relationship, although as Tabby learns more about the tragedy that happened 22 years earlier, perhaps Tabby will learn some things about her mom that she never wanted to know about.

Maia Reficco plays Noa Olivar, who has gotten into trouble for using drugs and who is now doing community service and taking several drug tests for the remainder of the school year. The actor previously played Kally on the TV series Kally’s Mashup

Reficco shared some photos from a shoot that the cast did for Teen Vogue and wrote in the caption, “@teenvogue making our pretty little dreams come true. thank you so incredibly much to everyone involved in making this magic happen. such a pinch me moment. i love you girls!! we did it.”

Chandler Kinney plays the role of Tabby Haworthe, a teenager who loves horror movies and who dreams of attending NYU and becoming a filmmaker. The actor played Riana Murtaugh on the TV series Lethal Weapon and Willa Lykensen in the Disney+ movie Zombies 3.

Tabby is a great character, whether showing Imogen compassion or working at Millwood’s movie theater and showing her passion and enthusiasm for the horror genre. Tabby is genuine, sweet, smart, and thinks for herself.

Malia Pyles plays Minnie Honrada, who people call Mouse, on PLL: Original Sin, a character who isn’t friends with the other main characters when the show opens. The actor played the character Cherisa in two episodes of The Fosters, one of the best family drama TV shows, and also played Sarah on the comedic series Baskets.

There seems to be more than meets the eye with Mouse, who spends all of her time on the computer and who is tired of being teased at school. Mouse is an important teen drama character as she shows that high school isn’t easy for everyone and that being popular doesn’t matter.

Zaria plays the role of Faran Bryant, a ballerina who is cast in Swan Lake and who has to deal with Karen’s jealousy over the fact that Faran is more talented than she is. Zaria’s pervious roles include Sasha in an episode of Black-ish and Jen Clewell on Bosch: Legacy

Faran is a confident and smart character who, along with the other main characters, thinks that Karen is sabotaging her and setting her up. Faran agrees that something has to be done to stop Karen, which sets up what is sure to be an exciting and compelling season.

Mallory Bechtel plays the roles of twins Karen and Kelly Beasley on Pretty Little Liars: Original Sin. Previously, the actor played Bridget in Hereditary, one of the most popular A24 movies. Peter Graham has a crush on Bridget, who he goes to school with.

Bechtel’s character is definitely the mean girl type, as she wants to make everyone else’s lives miserable if it means that she can stay on top. It will be interesting to see how her dynamic with Imogen develops as the two hate each other now that they’re no longer friends.

Imogen is a tough character, and she mentions that her pregnancy is the “teen tragedy of the week” as her classmates haven’t been supportive. Imogen is grieving a horrible loss at the beginning of the series and fans root for her right away, although some of her thoughts and actions suggest that there is more to her than meets the eye.

Caitlin Bristow says She and Jason Tartik are Struggling with Wedding...