Daily trading volume has increased significantly, and the chart is clearly on the rise. It seems that the bulls will not stop when FOMO and a short squeeze pull the price up.

MACD also shows an extreme bullish trend even on the weekly chart. The next resistance level mentioned above goes up to $ 12,300. This resistance point occurred in August 2019 and is the only strong resistance between $ 12,000 and $ 14,000.

The weekly chart is now confirmed and the RSI has not been expanded much for a strong bullish trend. Weekly trading volume decreases every week, but is expected to increase significantly by the end of the current week. 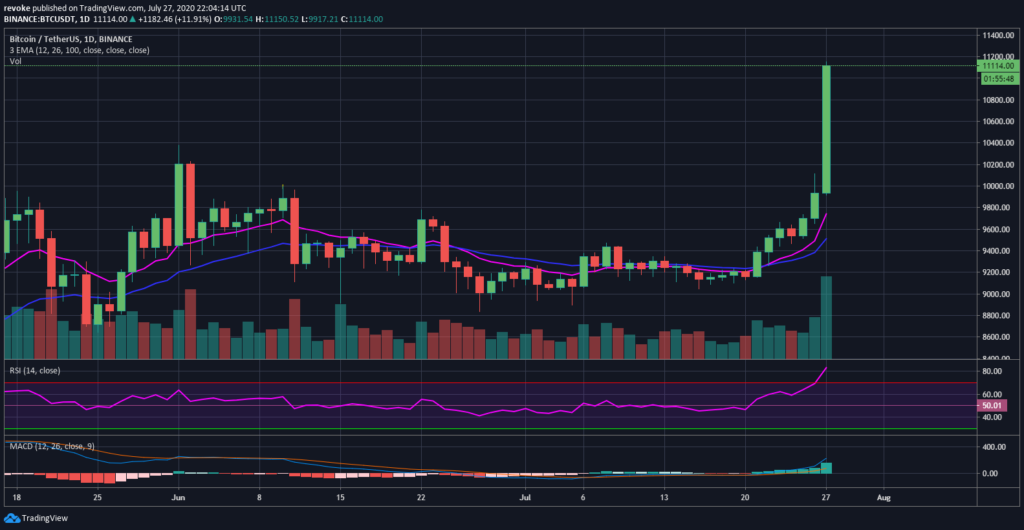 What Is The Next Step For Bitcoin?

Bitcoin eventually seems to have caught the DeFi craze and is currently destroying most altcoins. His domination also increased from 60% to 63.2% in just a few hours. Bitcoin seems to be following the global exchanges that experienced a similar leap a few days ago.

The dollar is now extremely weak, going down to a drop not seen against the Euro since 2018. Many investors are running to Bitcoin because they see the weakness of the dollar. Long-term basics were intact for Bitcoin through 2020, and Grayscale bought a lot of Bitcoin every day.

The number of cryptocurrencies in the stock markets also drops after the liquidation on March 12, which indicates that investors are willing to keep Bitcoin in the long term.

See Also  How Will The Liquidation In Bitcoin (BTC) Affect The Price?

Smartphone concept with changing back color from Vivo

Zac Efron hospitalized in emergency: he speaks after having come close...

Record Number of Addresses Having At Least One Bitcoin