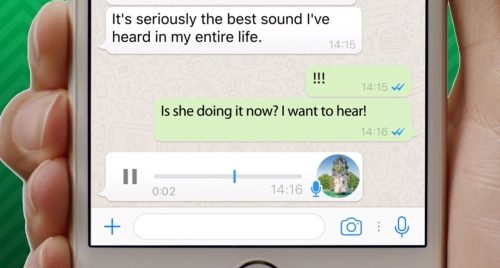 WhatsApp, which has been innovating over and over, is currently making an improvement for voice messages that will comfort users. That feature, which has been used in many other messaging applications for years, will soon come to WhatsApp.

New reports have revealed that WhatsApp will bring playback speed adjustment to the voice messages feature. However, as it is known, this feature was previously encountered by mobile users in various applications. It turned out that the function we are familiar with from platforms such as Telegram has finally been noticed by Facebook developers.

Announced for the first time by WABetaInfo, a trusted resource, the feature was discovered among the platform’s secret codes. The statement made by the source stating that they will share the screenshots soon is as follows:

“WhatsApp is finally testing its option to change the playback speed for voice messages. This feature is under development. It will be made available to users in an update for iOS and Android in the future. ”

WhatsApp is finally testing an option to change the playback speed for voice messages. 🔥
This feature is under development and it will be available in a future update for iOS and Android.

Screenshots will be published here on @WABetaInfo when available in a future beta build.

The leaked feature will save WhatsApp users time on voice messages. If you do not have time to sit for a long time and listen to all the audio recordings, this may not be of interest to you. However, if you want to listen and pass in a snap, you will be able to listen to your messages in an accelerated way up to 2X level.

As of now, the development of this feature continues. Probably, the feature that will be introduced to Beta users first will be added to the stable version of the application on iOS and Android devices. It is estimated that we will not wait long for all this to happen. Overlooked by WhatsApp, which quickly closes the differences with its competitors, the voicemail setting will soon become available.

If you haven’t seen this feature in other apps so far, you can take a look at the Telegram screenshot below. The voicemail options to be added by WhatsApp will look more or less like this:

Well, what do you think about this late but critical feature of WhatsApp, are you interested?