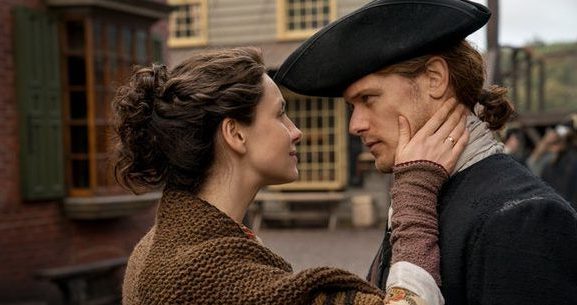 The Battle of Culloden on Outlander was fast approaching and Jamie was sure he would die in the battle. To keep her and hers child safe from her, Jamie sent Claire through the stones and back to Frank Randall (Tobias Menzies).

After this, the couple separated for almost two decades before Claire returned to the past. However, this may have left fans wondering if Jamie ever tried to travel forward to be with the love of her life.

This is especially confusing since he surely would want to reunite with her after he managed to survive Culloden. The main explanation in Outlander for why he did not attempt to travel is because Jamie cannot travel to the future.

This is because he doesn’t have the time travel gene that characters like Claire and Brianna Fraser (Sophie Skelton) have. Outlander fans will remember in season two, episode 13, that he tries to touch the stones but nothing happens.

He also doesn’t hear the trademark buzz on Outlander, indicating that he might get through them. Which indicates that once he allowed Claire to travel he couldn’t do anything else to get to her.

Even if this made Jamie Fraser (Sam Heughan) feel extremely miserable he was willing to do anything to protect Claire Fraser (Caitriona Balfe) and her son in Outlander.