Home Entertainment What’s going on between Knights of the Old Republic and the Skywalker... 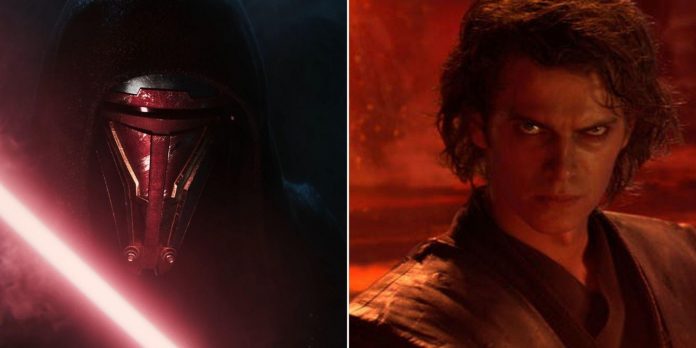 The Star Wars world is full of rich and developed history, and that’s never more obvious than in a game Star Wars: Knights of the Old Republic. Not only was KOTOR the first game to push so far back into Star Wars history, but it was one of the first games to embrace dynamic storytelling, allowing players to choose to align with the light or dark side depending on their actions throughout the game. However, with Disney’s acquisition of Lucasfilm and LucasArts in 2012, the new parent company de-canonized many old Star Wars stories, so it can be hard to keep track of what is still considered canon prior to the Skywalker Saga.

Fans of Knights of the Old Republic have little to worry, as although it has never been formally canonized, it might as well be. It’s set so far back that it doesn’t influence the direction of the Skywalker saga in any way, like much of legends content. What happens between the hit game and the Skywalkers is much more of a mystery, but there are a few major events fans should be aware of.

RELATED: What To Expect In Star Wars: Knights of the Old Republic 2’s Restored Content DLC on Switch

First, fans should be aware of how Star Wars labels time. The Galactic calendar revolves, as many things in Star Wars do, around Coruscant, which takes 338 days to go around its star, Coruscant Prime. As such, each year is considered basically identical to a year here on Earth. The year numbers are referenced in relation to the Battle of Yavin, the battle that led to the destruction of the first Death Star in A New Hope. Years are either BBY (before the Battle of Yavin) or ABY (after the Battle of Yavin). For context of where things reside on the timeline, Knights of the Old Republic takes place in 3956 BBY, while The Phantom Menace takes place in 32 BBY.

The Rise of the Republic

The Sith and Jedi had been at war for millennia without an end in sight. Around 1000 BBY, the galaxy began to coalesce around the Jedi, giving rise to the new Republic, and allowing the Jedi to finally gain an upper hand against the Sith. In the culmination of generations of battle, the Jedi were able to liberate Coruscant and reestablish it as the center of the newly reformed Galactic Republic. The war officially ended when the Jedi presumed they had wiped out all of the Sith. However, they were unable to eliminate Darth Bane, one of the most power Sith Lords in Star Wars, whose actions are more ambiguous now, but otherwise, the character is canon due to an appearance in Clone Wars.

Darth Bane knew that any outward attempt to revive the Sith would be swiftly ended by the Jedi, so he established a new order: the Rule of Two. While the Sith’s Rule of Two wasn’t always observed throughout Star Wars, many Sith Zealots devoted their lives to it. This new doctrine decreed that only two Sith lords could exist at any given time: a master of the dark side of The Force, and an apprentice to learn and study under the master, and one day usurp them. Darth Bane himself was eventually killed by his apprentice, Darth Zannah, beginning the cycle of the Rule of Two that would last until Anakin Skywalker turned to the light and overthrew Darth Sidious.

In the aftermath of the presumed fall of the Sith, several unified star systems founded the inaugural Galactic Senate and elected Tarsus Valorum as the first Supreme Chancellor, proving governments in Star Wars can be good. While presiding, Valorum disbanded the Old Republic’s military and established an intergalactic code of engagement for any future wars to come.

Another key figure from this time period was Tarre Vizsla, the first Mandalorian to be inducted into the Jedi order. As a Jedi, Vizsla constructed the Darksaber to be weapon of choice. His unique lightsaber became an important symbol for Mandalorians as it was passed down from leader to leader, often contentiously. With Din Djarin now possessing the Darksaber in The Mandalorian TV series, and Ahsoka’s history with the blade, the Darksaber will have an important role in future Star Wars stories alongside its colored history.

RELATED: 5 Burning Questions We Have About Star Wars Jedi: Survivor

Around 300 BBY, the galaxy entered Star Wars’ High Republic era, a period of time considered the golden age for many planets. There was peace across the galaxy, innovation abounded, and the Jedi were at the height of their power. While the government and Jedi were not perfect in their respective dominions, both had widespread support and trust across species.

With the long-standing peace, many core planets suddenly found themselves overpopulated. To help combat the issue, the Republic launched a new hyperspace mapping project, allowing for safer travel and exploration of the Outer Rim. However, this remarkable innovation also brought forth easier ways for people to evade the law. While it let Han Solo make the Kessel Run in less than 12 parsecs, others used Outer Rim mapping for more nefarious purposes. What began as an honest endeavor started the beginning of the end for peace in the galaxy.

In the midst of the Outer Rim mapping project, one of the worst disasters in galactic history took place: the Great Hyperspace Disaster. A large freighter known as Legacy Run came apart mid-hyperspace transport, sending huge chunks of debris traveling at light speed towards planets in the Hetzal system. The Jedi did everything in their power to mitigate the damage, but the Great Disaster ultimately still killed billions. The horrific situation led to the Republic banning hyperspace travel in the Outer Rim.

The Great Disaster was eventually discovered to be a terrorist attack by the Nihil, a group of anarchists who were unhappy with the Republic and Jedi invading their territory. Lead by their leader Marchion Ro, the Nihil were able to rally other anarchists and separatists to repeatedly beat back the Republic invaders. The key to their victory came from Ro’s familial connection with beasts known as the Nameless, ancient creatures who preyed on force-sensitive individuals. The Nameless caused Force-users to have hallucinations, lose their connection to the Force, and, ultimately, turned them into lifeless husks. With the Nihil’s weaponization of The Nameless, the Jedi recalled their forces back to Coruscant for safety. Without the help of the Jedi, the Republic was forced to relinquish control of the Outer Rim to the Nihil. Not much is known about the fall of the Nihil, as they were essentially obsolete by the time Anakin Skywalker is born in The Phantom Menace.

Star Wars: Knights of the Old Republic has reportedly been indefinitely delayed.