Home Entertainment What we know about the 1.5 update for Stardew Valley Mobile devices 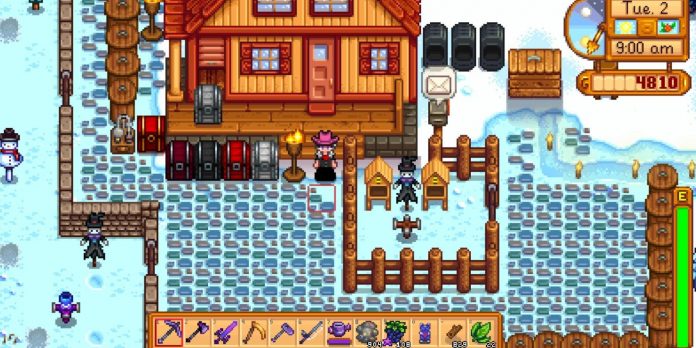 The laid-back Stardew Valley farm simulator has appeared on a surprisingly large number of platforms since its initial release on Steam in 2016. Since 2022, Stardew Valley is available for all types of consoles, including PlayStation b, PlayStation Vita, Xbox. One and a Nintendo Switch. In addition, a mobile version was released, available for both Android and iOS users. Unfortunately, the development of the mobile version of Stardew Valley was slow, and more than a year later, the game is still missing the main update 1.5 received by other versions.

Stardew Valley creator Eric “ConcernedApe” Barone initially collaborated with publisher Chucklefish, but later split from them and began publishing Stardew Valley independently on all platforms. When he decided to move the game to mobile devices, he collaborated with The Secret Police, although the name Chucklefish was not removed from the iOS and Android versions of the game until December 2021, when he was finally able to self-publish on mobile. Currently, Barone is working with the team on the release of Update 1.5 for mobile devices, while developing his next project, recently announced Haunted Chocolatier.

What’s in the Stardew Valley 1.5 update?

The 1.5 update for Stardew Valley was one of the biggest free updates to the game since its initial release. He added a brand new area, Ginger Island, that players can explore. Areas of Ginger Island could be unlocked by collecting Golden Walnuts, and new items were discovered in each area: fossils, weapons, recipes and, of course, new plants for the player’s farm, including mangoes, bananas, tarot and more. In addition to Ginger Island, new late-game content has been added for players who have completed the main story of Stardew Valley, including additional requests from Pelican Town residents, high-difficulty quests from Mr. Qi and a perfection tracker encouraging players to reach 100%. completion.

The Stardew Valley 1.5 content update was released on December 21, 2020 for the PC version of the game. ConcernedApe called it a holiday gift for its fans who didn’t expect to see an update until 2021 or later. In the end, the 1.5 content update appeared in the PlayStation, Xbox and Nintendo Switch versions of the game. Unfortunately, work on the mobile update was delayed due to the complexity of implementing such a large amount of new content on mobile devices.

Why is Stardew Valley 1.5 delayed on mobile devices?

On his Twitter and blog, ConcernedApe stated that the main reason for the delay was “legal difficulties” related to his departure from Chucklefish and hiring a third-party team to work on mobile versions of the game. He expressed disappointment and frustration, saying he understands that the release of the update took “too long” and that he acknowledged that fans are upset. As of June 2022, ConcernedApe no longer shared details about the nature of the update delays, but continued to confirm that he and his team are working to release the Stardew Valley 1.5 update to mobile devices as soon as possible.

When will the 1.5 update for mobile devices be released?

Unfortunately, the version 1.5 update for Stardew Valley mobile versions still does not have an officially confirmed release date. ConcernedApe regularly reported on his Twitter and website throughout 2021 and 2022 that he and his team were continuing to work on an update, but he did not want to give an official release date due to already significant delays and his own relative inexperience with mobile devices. development. While a debut at the end of 2022 is certainly possible, the current lack of updates unfortunately makes a 2023 release more likely at the moment. However, it is likely that ConcernedApe will continue to work on the update and provide it to its fans as soon as possible.

Will there be more mobile updates after version 1.5?

Since ConcernedApe has switched its focus to working on Haunted Chocolatier, it is unlikely that any version of Stardew Valley will receive major content updates after version 1.5. It will release minor Stardew Valley fixes and bug fixes as needed. On Twitter, ConcernedApe also discussed the possibility of future minor quality of life updates, including the ability to move water bowls used to feed dogs and cats, and place the player’s house anywhere on the farm, rather than in his current fixed location.

However, fans looking for more extensive content updates will probably have to turn to the vast modder community for Stardew Valley, which has released dozens of mods adding new characters, quests, crops and more to the farm simulator.

Metro: Exodus, Next Gen Analysis. The Best Way To Experience The...

Loki and other series get debut dates on Disney +