Home Entertainment What We Do in the Shadows: 10 Quotes that Perfectly Describe Nandor... 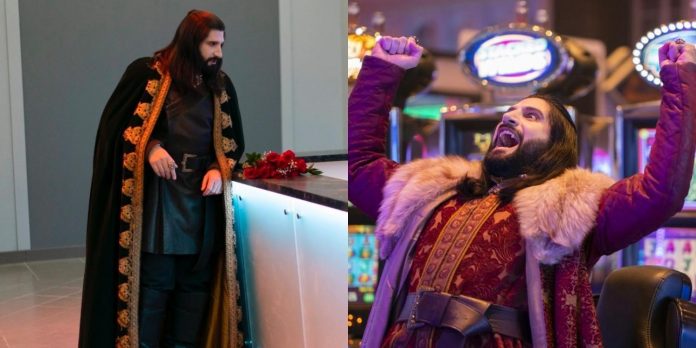 With the release of its fourth season, the FX comedy What we Do in the Shadows demonstrated, once again, that it is one of the funniest series currently on television. It is a fascinating and unique take on vampire mythology, focusing on a group of vampires living in Staten Island. Of particular note is the character of Nandor, who is centuries old and thus has a great deal of trouble acclimating to the strangeness of the modern world.

What makes Nandor such an excellent character is his discomfort with many things that regular people take for granted, and there are a number of quotes that perfectly summarize his oddball personality.

“I Would Say, ‘No, I’m Pillaging Everyone, You Included.'”

Nandor has one of the most fascinating histories of the various vampire characters, and as a warlord, he had a propensity for committing acts of great violence. In keeping with his general personality, he tends to be rather blase about the horrific things he did in the past, as this quote makes clear.

While this could have been seen as reprehensible with any other character, somehow Nandor makes it seem just another quirky and charming part of his personality, something that makes him one of the series’ most likable characters.

“I Was Relentless. They Would Call Me Nandor The Relentless. Because I Would Just Never Relent.”

In addition to being a very skilled warrior, Nandor was also known for his relentless approach to the act of killing. This is something that he clearly recalls with at least a bit of pride, as the tone of this particular quotation makes clear.

While the years have softened some of the edges of his personality, it is obvious from the fondness with which he recalls these earlier moments that they are still very much with him and that they are key to understanding him in the present.

“If I Find I’m In A Situation Where An Idiot Is Complaining To Me, You Can Either Kill Them Or You Can Pretend To Listen To Them.”

Though at first glance Nandor might not seem like one of the most intelligent characters in What We Do In The Shadows, the truth is that he is just as brilliant as his housemates (both human and vampire). This particular quote is a key to understanding Nandor’s personality because it is so in sync with his general attitude toward life.

Time and again throughout the series, he shows that beneath his killing instinct there is someone who thinks a great deal about the world, his place in it, and what his behavior should be.

There are many reasons that What We Do in the Shadows is one of the best series on FX, but one of the key elements of its success is the skill of its writing and its performances. In this quote, viewers quickly see Nandor’s essentially childlike nature.

He takes such obvious pleasure in crepe paper–which he constantly mispronounces as “creepy”–that it’s almost impossible to believe that he is in fact a blood-sucking vampire. It’s one of those moments that helps to reinforce why Nandor remains a cornerstone of the series’ enduring appeal.

“Guillermo Is My Familiar, But Sometimes He’s A Little Too Familiar, You Know What I Mean?”

The bond between Guillermo and Nandor is one of the most important in the series, and while the former constantly wants to be made a vampire, the latter is significantly more ambivalent. In fact, this quote is a good summary of the way that Nandor feels about his familiar. While he is clearly fond of Guillermo–something that becomes more clear as the series goes on–at times he doesn’t quite seem to know what to do with him.

The two are just such different beings and, at times, it seems as if they will never quite understand one another completely.

Of all of Nandor’s very funny lines, this is one of the best. It is one of the clearest indications the viewer gets of just how out of touch Nandor is with the world around him. The humor naturally arises from the fact that Nandor mistakes the series The Big Bang Theory for an adaptation of the slot machine that he had been playing earlier in the episode.

Try though he might, Nandor just can’t quite bring himself to be as at home in the modern world as his fellow vampires.

“I Would Not Even Remember Your Name If It Wasn’t Written On The Piece Of Paper I Keep In My Pocket At All Times.”

Colin Robinson is another very funny character in What We Do in the Shadows, and though he exasperates his roommates (in keeping with being an energy vampire), it’s rare that he ignites the sort of scathing comment that Nandor delivers here.

Though it is somewhat out of character for what the viewer usually sees from this character, it is nevertheless an important indication of Nandor as a person. Beneath his lovable and sometimes bumbling demeanor, there is still the man who was known for his relentless killing of others, and people forget that at their peril.

“We Drank The Blood Of Some People But The People Were On Drugs And Now I’m A Wizard.”

There are many funny moments in What We Do In The Shadows, but arguably one of the best is when the vampires end up drinking the blood of someone who has been doing drugs. Unsurprisingly, this brings out some very zany behavior from the blood drinkers, including Nandor.

This quote reveals the extent to which Nandor is a very childlike vampire in some ways, with a rather innocent way of looking at the world. There is, in fact, something more than a little endearing about his pretending to be a wizard.

Like many of the other vampires who appear in this series, Nandor sometimes has difficulty adapting to the changes in the modern world. In this particular instance, he receives a chain e-mail urging him to take it seriously, and he truly does.

As it’s Nandor, he unsurprisingly does exactly as it instructs. The entire affair is played for laughs, of course, but it is also a reminder to the viewer of just how out of time Nandor is and how much he will never quite be able to adapt to the modern world.

If Nandor has a catchphrase, it is this. It’s an expression he utters repeatedly throughout the series, usually when he has reason to be annoyed or upset with someone. It is a key reflection of his personality, because, while it is obviously an expression of frustration, there is something quite endearing about his delivery.

And, given that this is Nandor, it’s not entirely possible to take him seriously. It’s no wonder that it has come to be one of the funniest things that the character is known for.

aespa topped the MelOn chart with the song ‘Savage’, this is...